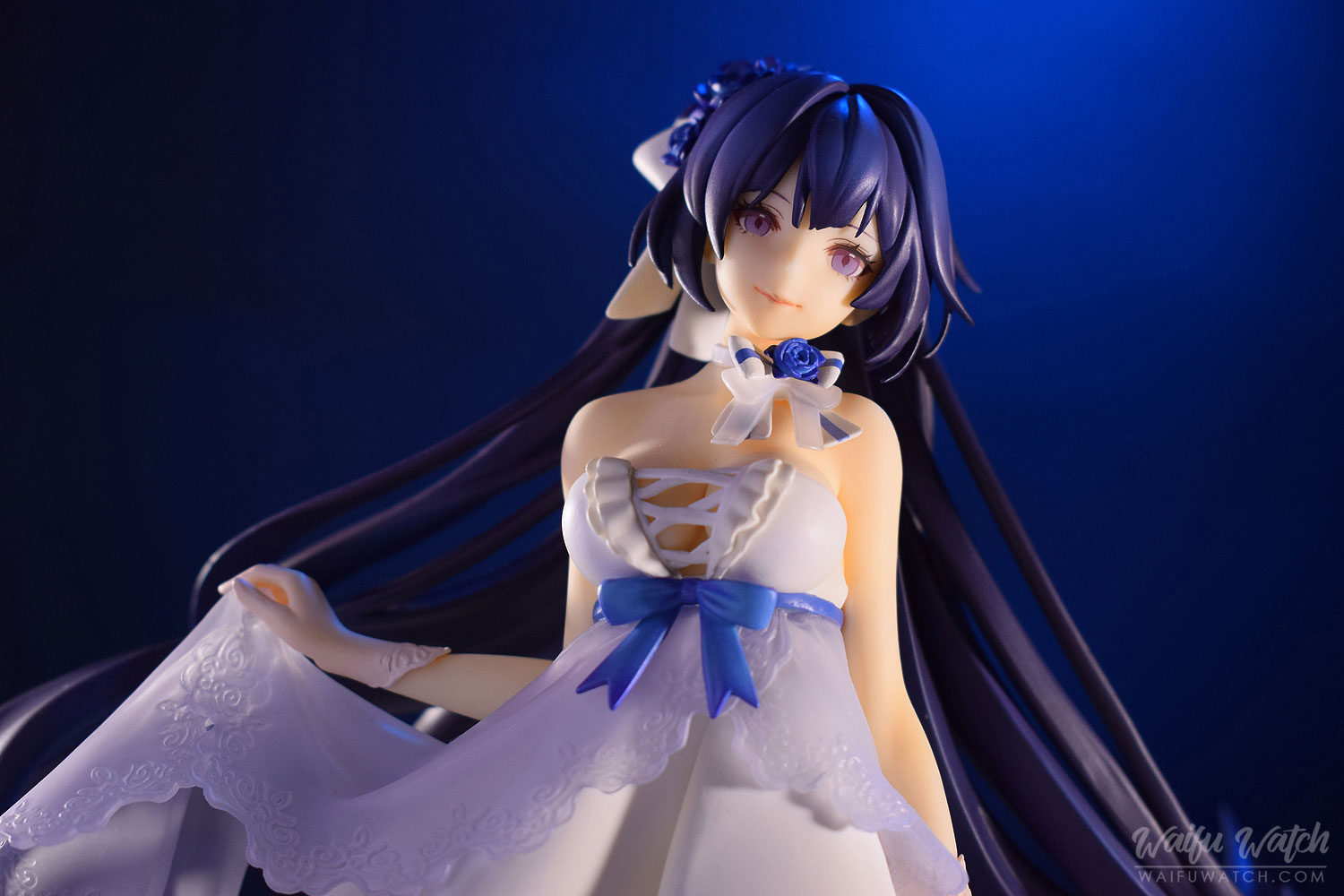 Today we’re taking a look at a new figure from Myethos, featuring Mei Raiden from the smartphone game┬ĀHoukai 3rd (or┬ĀHonkai Impact 3rd, in some places) by miHoYo. She appears here wearing her “Eternally Pure” costume, which was revealed on the character’s birthday. 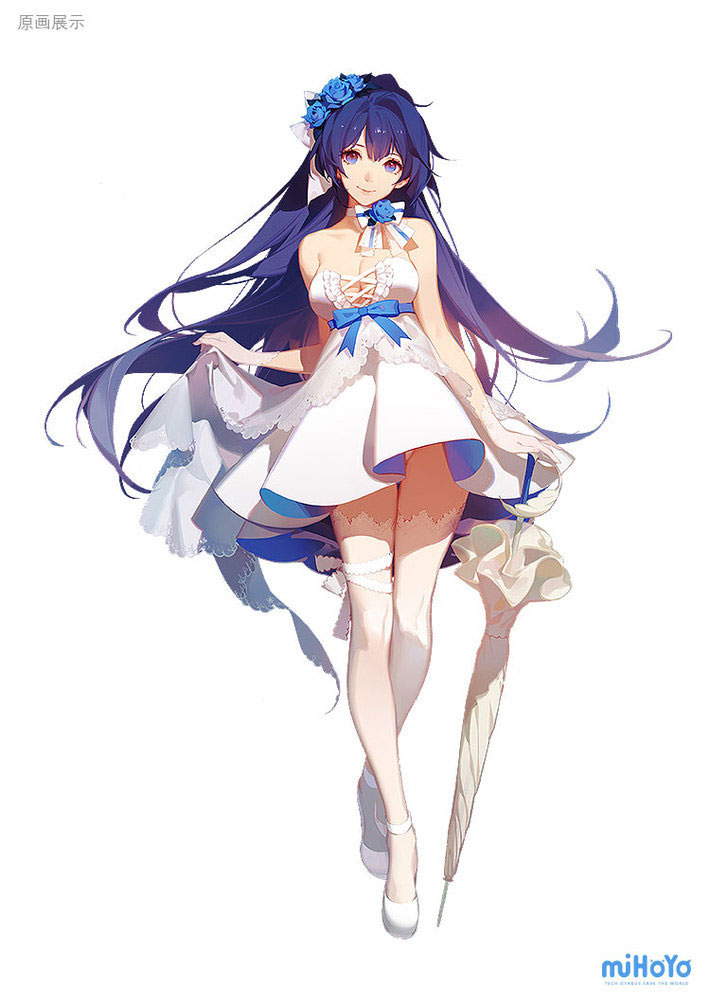 I’m not very familiar with the game, but it’s easy to tell from a glance that this character has an air of elegance about her. The title “Eternally Pure” is certainly evoked by the clean, crisp white and blue colour scheme. As you can see above, the figure has done a wonderful job capturing the aesthetic of the concept art.

My first impressions of the figure were very positive – Mei Raiden certainly has a presence, and the clean colours and fine detailing make her very attractive to the eye. Some details left a little to be desired, but overall she impressed.

However, what immediately jumped out to me was how large the figure’s base is – it’s so big that you could serve your dinner on it! Even then, a small amount of her hair extends beyond the base. This isn’t the end of the world by any means, but these things are worth bearing in mind if you don’t have a lot of shelf space to spare.

In terms of presentation, Myethos have done an excellent job with Mei Raiden’s packaging. Much like the figure inside, it’s clean, elegant and tasteful. The packaging quality is excellent as well, using thick, sturdy cardboard with a magnet to keep the door in place. Inside, Mei is held securely in place and comes wrapped in plastic and bubble wrap to further protect her.

Opening the box up reveals a large, clean print of the official figure art, and a viewing window for Mei herself. Plastic tabs will help you to remove the cardboard panel, so it’s easy to get into. If I do have one criticism, it’s that the assembly instructions are somewhat hidden – they’re tucked behind the cardboard panel on the left side.

However, it’s quite unlikely that you’ll need them, as the figure is very easy to assemble – no rocket surgery here. Mei fits onto her stand effortlessly, and the umbrella is then held in place between holes in the base and the palm of her hand. You may need to nudge her hand up a little to squeeze the umbrella into place, but it’s relatively secure once it’s in. While it won’t fall out on its own, it may come loose if you move her around a lot, so be careful.

Mei’s sculptwork (by AZURE) is, for the most part, of a very high quality. Her limbs are lithe and slender and the folds of the fabric elements are very well crafted. Details on the smaller decorations like the ribbons and flowers are largely crisp and sharp. The intricate patterning on her tights and the draping veils around her waist add a lot of visual appeal and are impressively clean.

The way her thighs and wrists are distinctly separated from the gloves and tights she wears also lend volume to the figure. Her face and hair are similarly well sculpted. The way her hair and the veils flow around her body create an element of dynamism that compliment her more static pose quite nicely.

There are some areas that I could criticise, however. The hem of her dress is a bit rough, though this is only especially noticable close-up. The ruffles and laces on her bust are a bit thick and lack definition compared to the rest of the sculpt. Meanwhile, the ribbons around her thigh and the straps on her shoes don’t lack the distinct separation seen at the edge of her tights and gloves. These are very small complaints, and you’re unlikely to notice most of them very much, but that extra bit of polish would have peaked this figure, I feel.

Overall though, the sculpt is top notch, and there aren’t any egregious production flaws that I could speak of. The quality does a good job speaking for itself.

The paintwork (by┬ĀPhoenix Gyakuten) is also of a consistently high quality, although I did notice more production flaws in the paintwork than in the sculpt. However, these hardly detract from the figure overall.

Mei’s paintwork features the use of subtle shading and various finishes, as you would expect from a high quality figure. Her shoes and the handle of her umbrella use a high gloss finish, for example, while the fabric of her dress is quite matte. Her tights and gloves use a subtle gradation, blending between white and flesh colour, to create the illusion of a thin, almost translucent white fabric. It’s a clever effect that works quite well.

Meanwhile, the veils are indeed translucent, which makes for appealing visual effect when light passes through them. The figure’s details are largely painted very neatly, particularly things like the blue lines on the ribbon around her neck. Her eye decals are very sharp and quite detailed, with very delicate eyelashes, though the colours are quite subdued, so sometimes they struggle to stand out.┬ĀShe also has a subtle lip-gloss which helps to define the shape of her mouth. It’s very attractive when the light catches it just so.

That said, there are some minor issues with the paint work. As mentioned before, there are a few places where there appears to be a small amount of factory dust in the paint. There’s also an odd sort of smear on the back of her hair (although you’ll hardly view her from the back). The paint on the inside of her dress could be neater where it meets on the edge of the hem, as well. Similarly, the paint on the ribbons on her thigh is not entirely ‘within the lines’, which doesn’t help with the lack of separation I mentioned earlier. Although at this point, I really am nit-picking.

One thing that I do think could have been improved upon a bit is the shading, particularly on the figure’s skin and dress. What shading there is on the dress is very subdued, which is presumably to maintain that clean, vibrant white that you see in the concept art. However, in practice it can mean that the figure looks a little flat under neutral lighting. This is more of a problem with the skin though, as the dress has folds which catch light and cast shadows. Her skin, being smoother, could have benefited from some subtle shifts in tone to further define her shape. 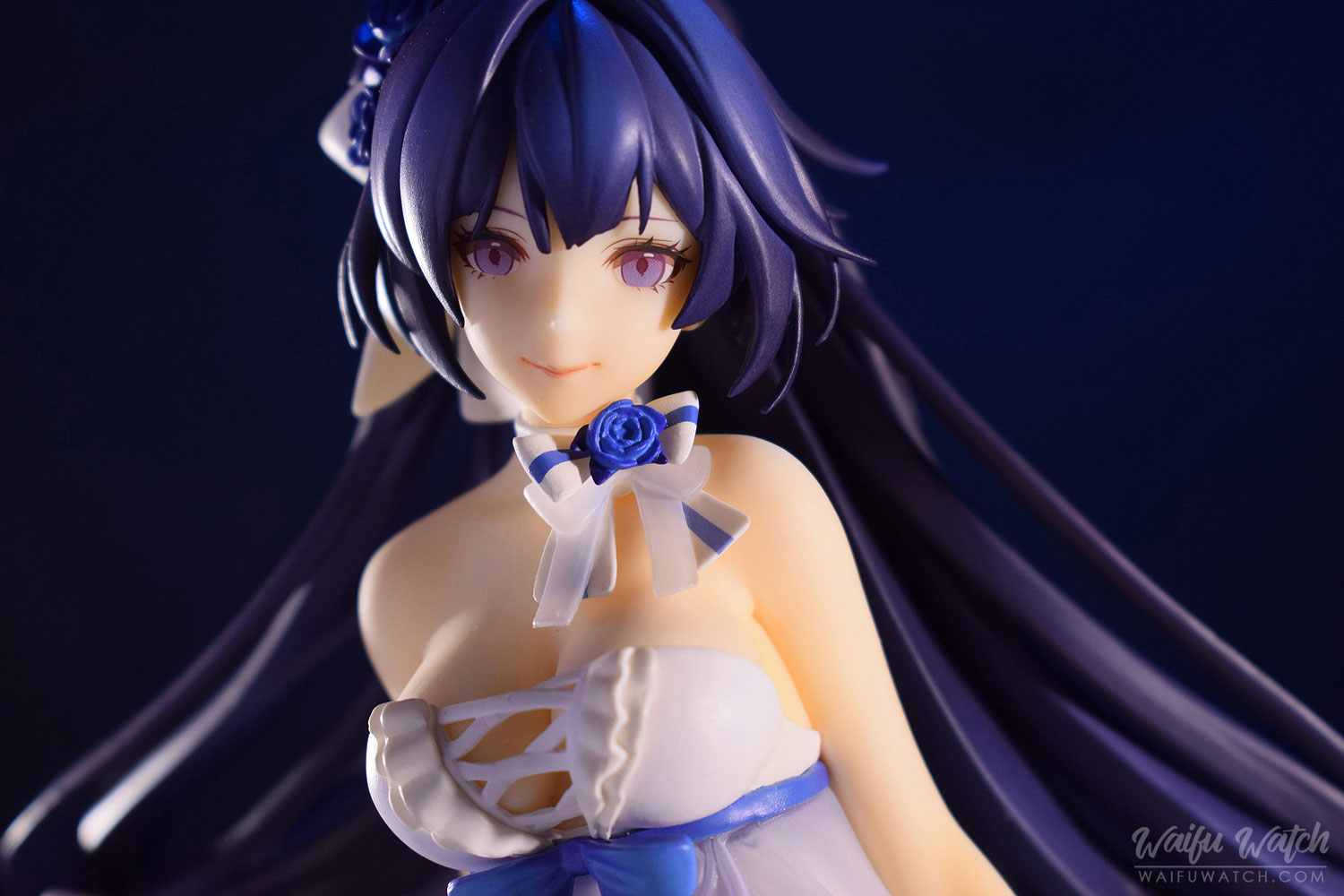 Myethos’s rendition of Mei Raiden is a very appealing figure, crafted with a high degree of quality. If you’re looking for a tasteful and attractive figure to display, Mei is an excellent choice. Her bold, clean colour scheme stands out nicely, and although the figure’s shading leaves a little to be desired, she still looks great under natural lighting. I do find her stand somewhat cumbersome, particularly as it isn’t that exciting to look at (although the flower on the front is a nice touch). It’s very large for the figure’s size, which might make her hard to display, especially if you’re tight for space.

Still, this is a great figure, particularly for her price point – figures like this can tend to trend toward more premium prices at times. If you’re on the fence about this one, I’d certainly recommend picking her up.

Mei Raiden is an appealing figure with excellent quality throughout – an easy recommendation. However, there are some minor quality issues here and there, and improvements that could be made to the overall sculpt and paintwork, as well. How much these affect her appeal is up to you, but I don’t feel they hinder her too much. Her base does hold her back somewhat, as its large size seems unjustified, and can make her difficult to find a spot for in more crowded collections. Still, she’s definitely worth the asking price.