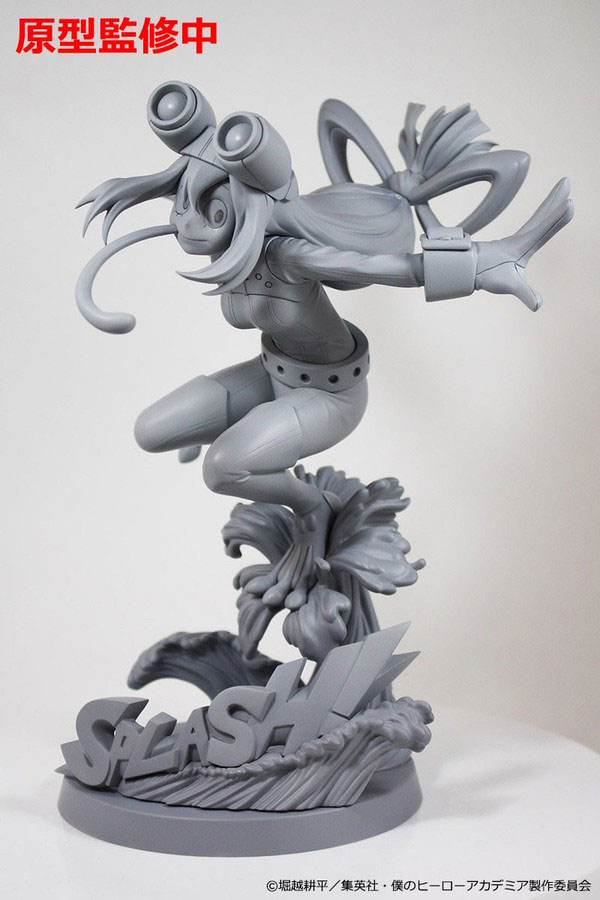 Manufacturer Bell Fine has revealed the first prototype photo for their upcoming Asui Tsuyu (a.k.a Froppy) figure. Froppy is a beloved heroine from the popular shonen series My Hero Academia, making this a much anticipated figure since its recent announcement about a month ago.

I’ve long been a fan of Froppy’s frog-inspired design (pictured above), although I don’t follow My Hero Academia . The prototype is very impressive so far; Froppy’s dynamic pose emphasises her primary features (her big hands and long tongue), and the sculpt accurately captures the look of her face as well. I’m especially fond of the base, which takes the form of a splashing wave – complete with a comic-style “SPLASH!” SFX. It’s a small touch, but it might be my favourite thing about the figure so far! Overall, it’s a promising start, and the whole thing should look even better with a good paint job.

However, there are some concerns about the quality of the final piece, due to Bell Fine’s hit-and-miss reputation among collectors. Although I’ve seen some suggestions that their standards have risen recently, Bell Fine’s figures are still known for being below-par in terms of quality. I’ll have a chance to form my own opinion on Bell Fine’s work once their upcoming Minamoto no Raikou (Fate/Grand Order) figure releases, but for now it’s something to bear in mind.

Either way, this figure has definitely caught my attention in a good way. I’m eager to see more – if all turns out well, then this might just end up becoming a must-have. It also makes me curious to see how Bell Fine’s Uraraka Ochaco figure will turn out, too. In any case, I’ll be sure to bring you more details when they arrive!