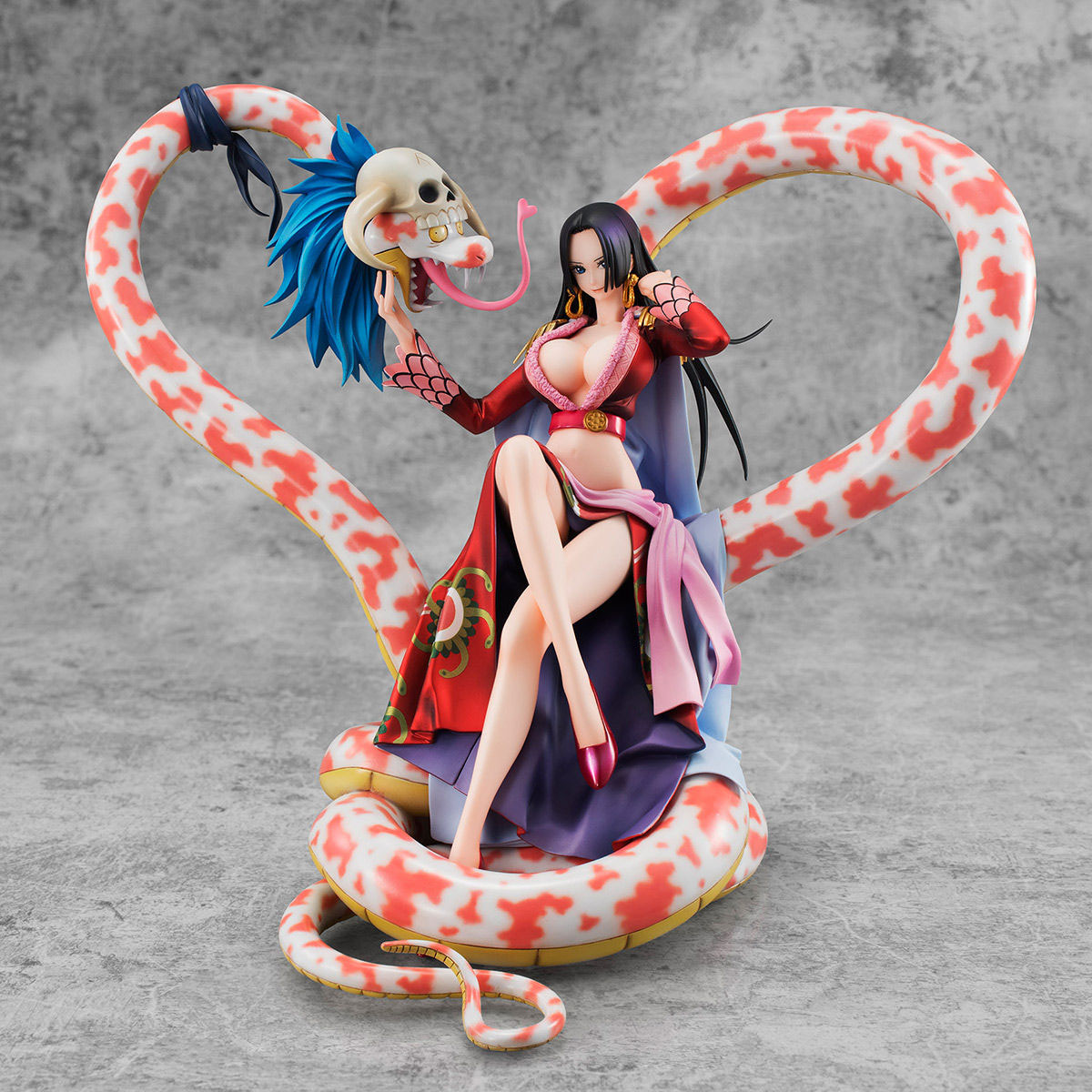 Pre-orders are now available for MegaHouse’s upcoming Boa Hancock Portrait of Pirates Neo MAXIMUM figure (talk about a mouthful!). The popular Pirate Empress from One Piece is 1/8 scale and around 23cm tall.

You can pre-order Hancock exclusively from the following stores:

I’m really impressed with this figure! I’m a big fan of Boa Hancock, and I’m a fan of MegaHouse’s work, so I’ve had my eye on this one for a while. It’s really turned out quite handsomely!

You could probably argue that this is the definitive Hancock figure – certainly among those on the market right now. While the figure emphasises Boa’s sex appeal and voluptuous curves, it still remains tasteful and faithful to the source material. She’s alluring without being smutty. Salome looks great too – it’s face is something I see a lot of other figures (particularly unlicensed resin statues) get wrong.

Judging by the official photos, her quality seems very high. MegaHouse’s P.O.P Maximum figures are known to have a high quality standard, deserving of their ‘premium’ status. The body sculpt is lovely – I like her lithe legs and I really like the way the small of her back looks, too. The paintwork looks great, too. I do have a couple of quibbles with the figure – the seam on top of her head, for example. It’s something that seems to be present on most Hancock figures by MegaHouse, which is a shame. I wish they’d sort that out, but it’s not the end of the world by any means.

I’m definitely thinking about picking this one up, but there are a couple of points to consider. The first is her price – this figure costs a hefty sum, and I’m not quite sure if it’s entirely justified. Although this obviously bears the quality of a premium figure, it’s not really the most elaborate or extravagant sculpt. Despite that, she’s one of the most expensive P.O.P Maximum figures so far. The second is her size – although she’s not massive, Salome makes the figure quite wide, which might make it difficult to fit Hancock on a shelf with other figures. I do think she’d make a very impressive centrepiece for a collection, though.

Either way, this is definitely one to check out for fans of Hancock and collectors of One Piece figures.

Can’t wait for this one toe be released in the standard stores!

Same! A lot easier than trying to order through the exclusive stores. Shouldn’t take long, I hope.