Banpresto has produced a vastÂ selection of prize figures over the years, many of which live under the Craneking banner. Their products span many famous and popular franchises, and feature a broad variety of characters. This includes renditions ofÂ Lupin III‘sÂ Mine Fujiko, who we’ve reviewed before, as well as today’s figure, One Piece‘s infamous villain and ex-Warlord of the Sea, Sir Crocodile.

Prize figures are an interesting breed; as you might have guessed from the name they’re produced as prizes, oftenÂ won from Japan’s popular crane machines. While they’re not commonly sold inÂ Japanese stores, online import outlets usuallyÂ get them in stock quickly. Due to their lower production values, prize figuresÂ tend to be cheap, so the better examples can make for very appealing budget buys. So, how does Crocodile stack up? 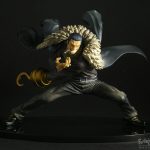 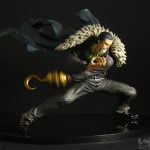 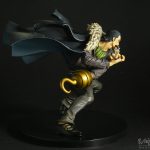 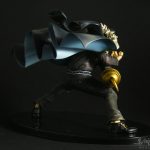 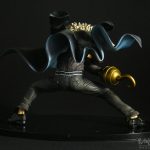 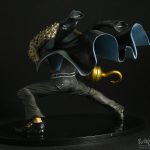 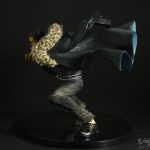 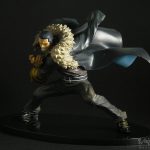 Right away, it’s obvious that Crocodile is very dynamic. HeÂ wears an aggressive sneer and strikes a fierce battle stance, with his long coat flung up like a superhero’s cape, arms aflutter. It evokes a strong sense of motion, and it looks badass to boot – all that’s missing is a swoosh of sand to make this look like a frame pulled straight from a battle scene.

Crocodile stands about 5″ tall on a roughly 8″ x 5″ base (although his coat extends beyond the base just a little bit at the back). He’s not very big, but the wide base might make him an awkward fit in some collections, and the low stance means he’s best viewed straight on, or from a lower angle. 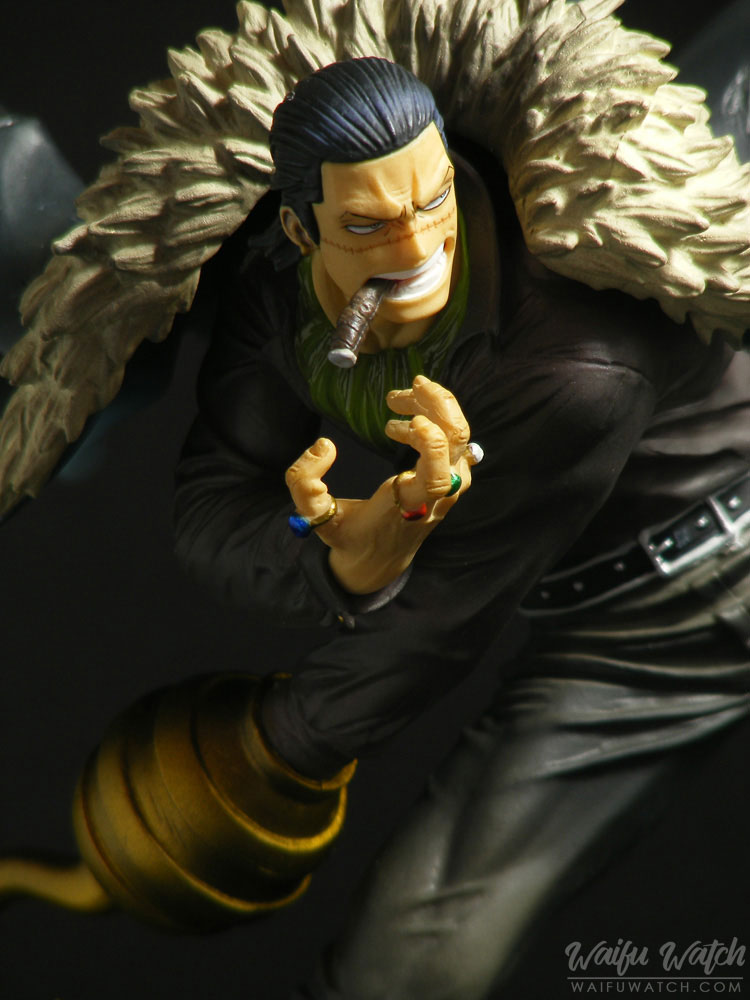 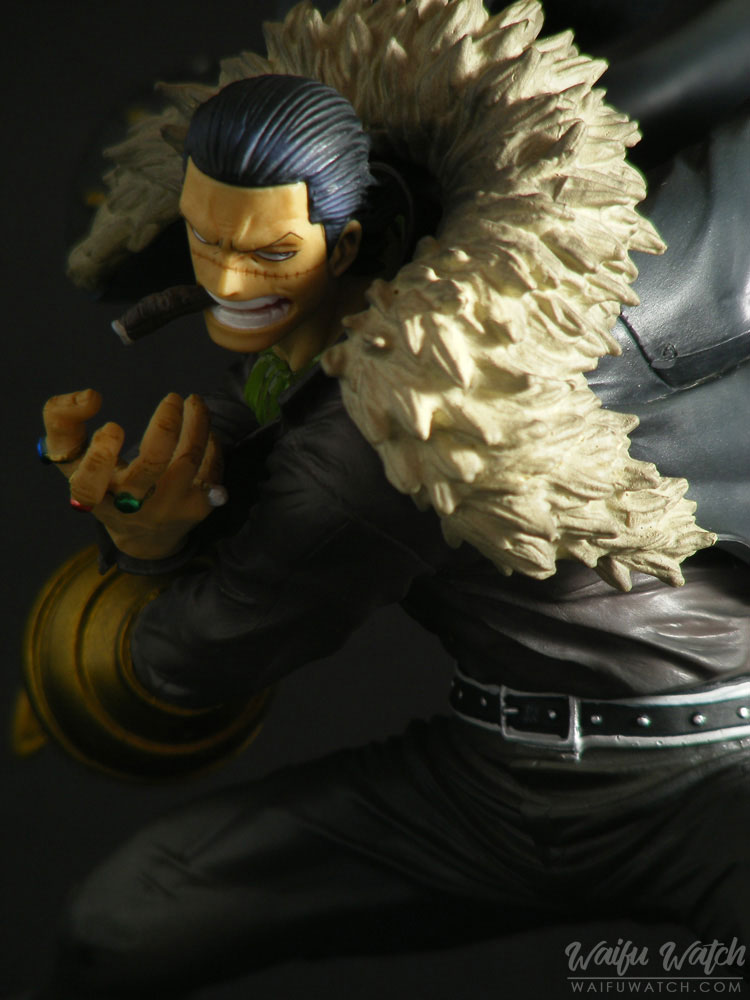 The figureÂ assembles easily enough – pop Crocodile on the stand, then fit the coat onto two pegs protruding from his shoulders. Easy peasy. The box also includes an arm designedÂ toÂ prop up his coat, but it’s visuallyÂ distracting and really isn’t necessary –Â the shoulder pegs can easily support the coat on their own.

That said, putting his cigar into his mouth can be pretty tricky. It’s a good idea to put Croc on a large table for this bit – preferably with a cloth or towel underneath him to stop the cigar from bouncing or rolling away if you drop it.Â Once it’s in, be careful not to knock it loose; it’s a very small part, and losing it will leave Crocodile with an awkward hole in his mouth. 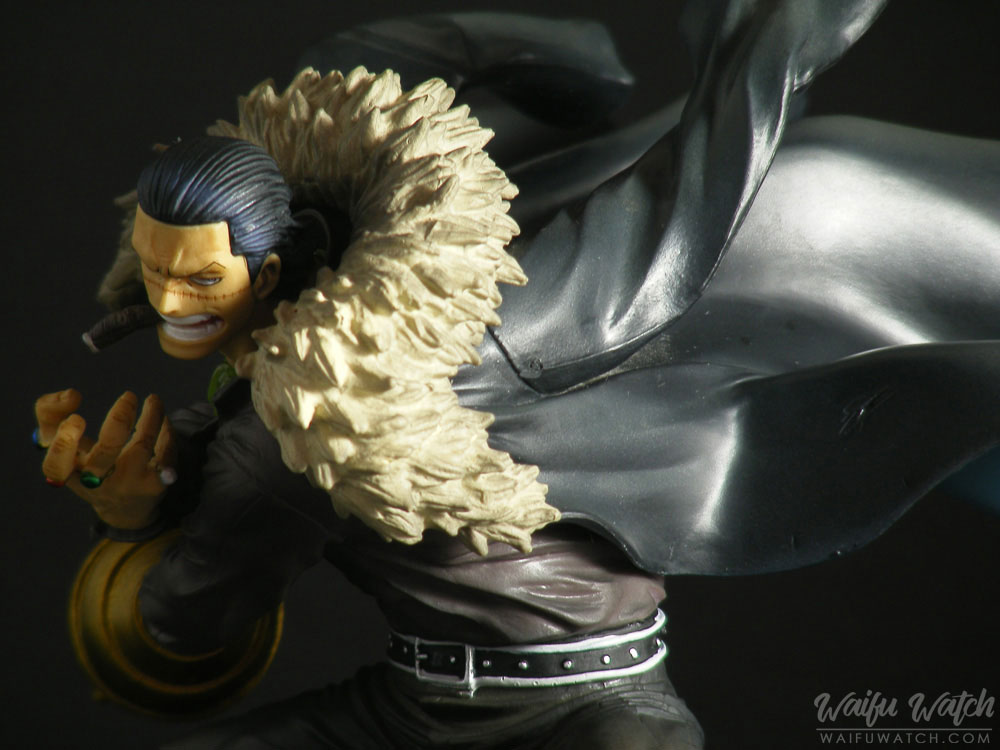 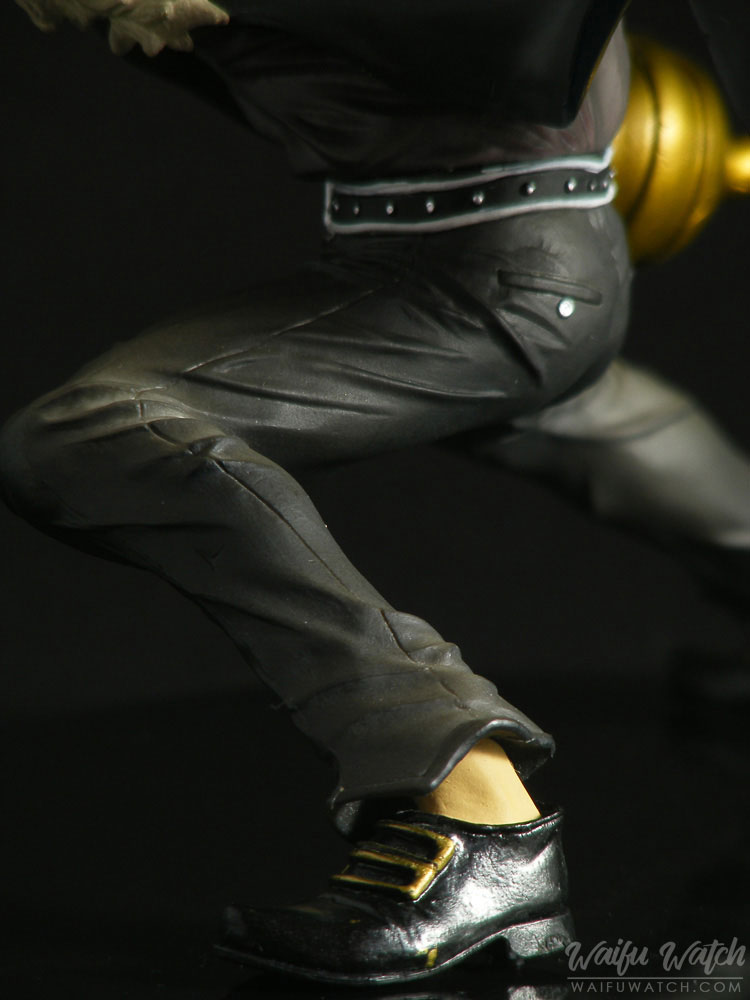 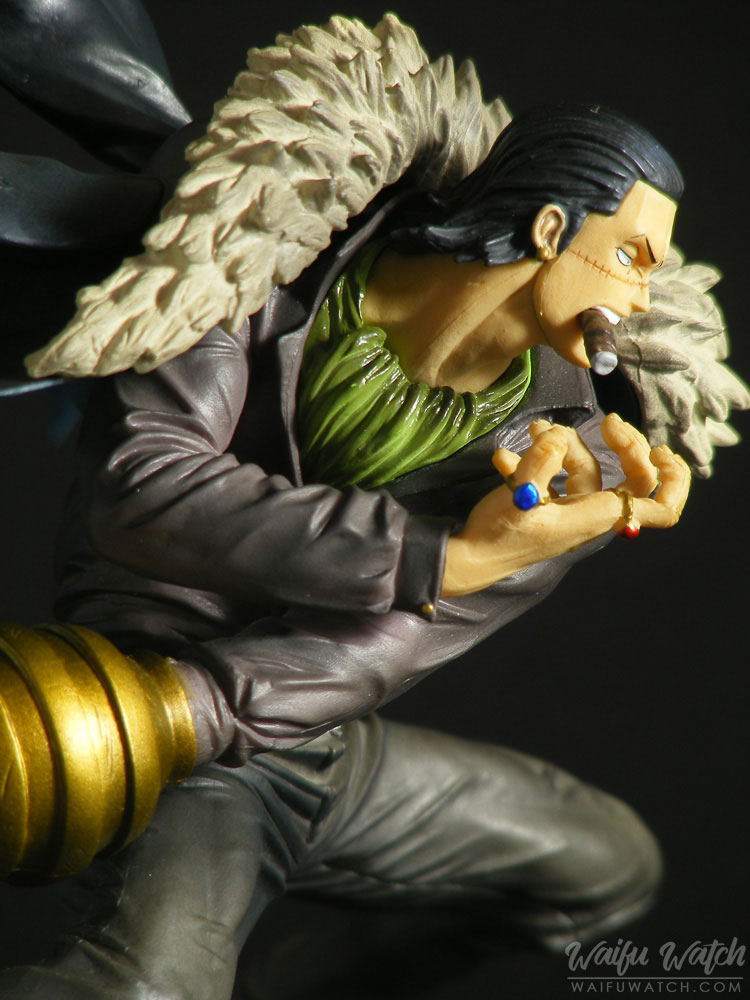 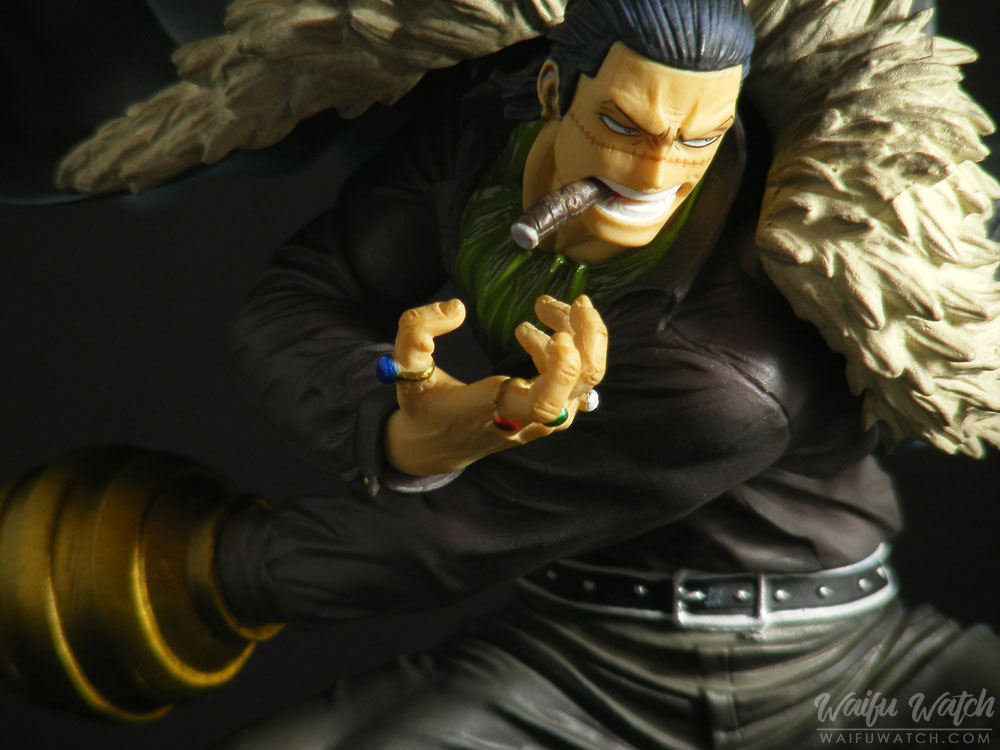 Moving on, Crocodile’sÂ sculpt is very impressive, particularly for a smaller figure. Every inch of it is packed with detail.Â All of his clothing is creased and folded, emphasising the dynamism of his pose. Even the smallest details popÂ out – the buttons and studs on his clothing are cleanly sculpted, and his claw is covered in small scratches that make it look battle-worn (although the same sort ofÂ scratches appearing on his coat is a bit odd). The fur collarÂ on his coat looks great, as does his cravat, and his shirt and trousers have the appropriate seams in place.

His headÂ and hand are also excellent. The likeness here is spot on – he looks exactly like the Crocodile you’ve seen in the manga and anime. Once again, the detail is impressive – Crocodile’s knuckles are wrinkled, and his hand is rugged and vascular. His brow is deeply furrowed, his forehead is creased, and his scar isn’t just painted on – it’s carved into his face. His cigar is bent and twisted slightly as well, which is a nice touch. 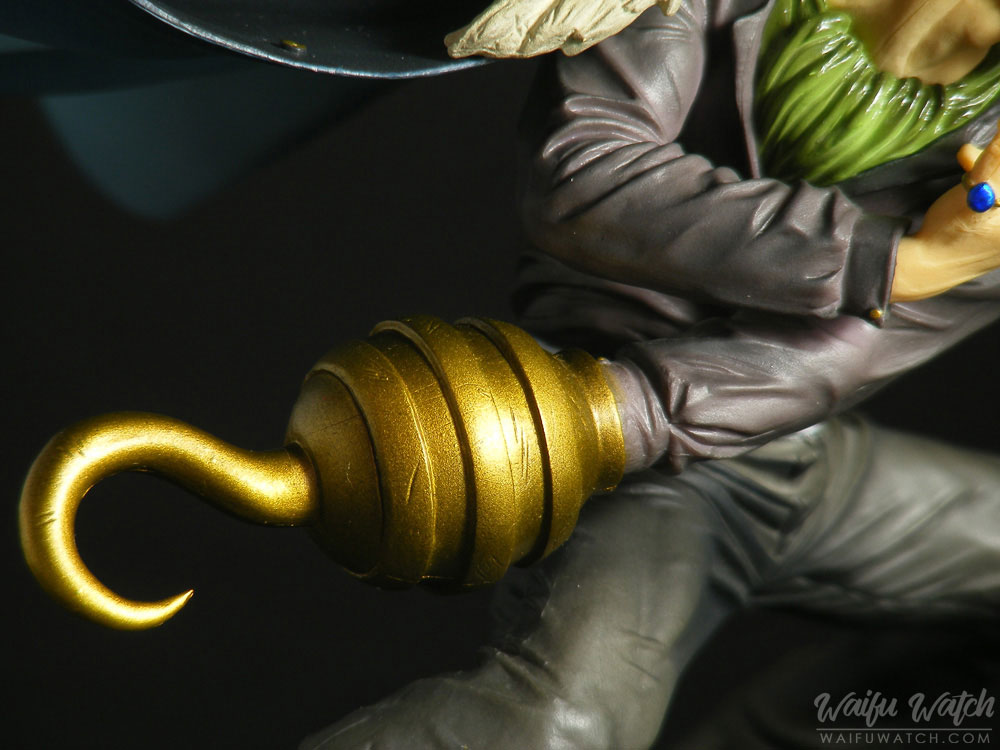 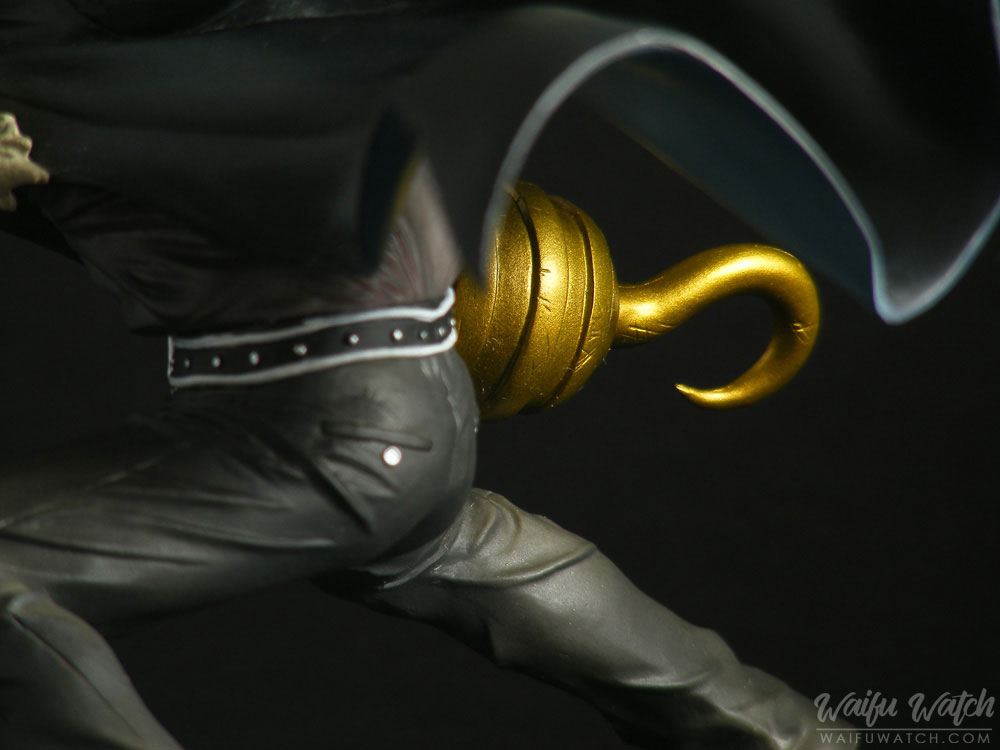 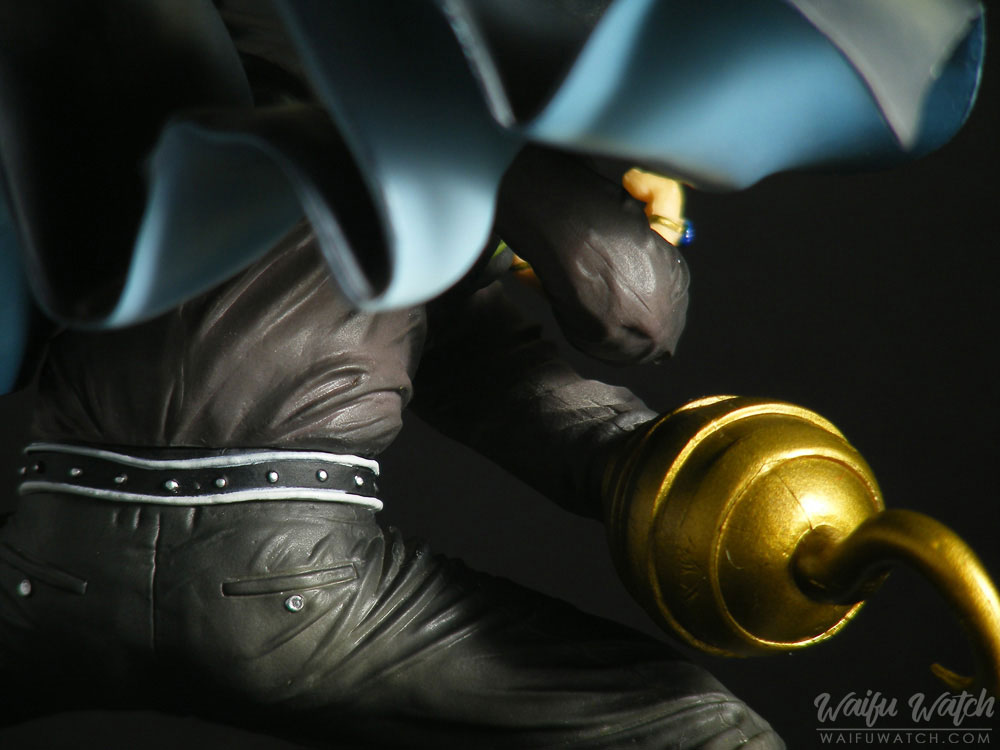 The paint job is pretty good, too. There’s plenty of colour variation to make the clothing look stressed and shaded, even on the inside of his coat. The use of different greys keeps the figure interesting to look at top to bottom, and if you look closely, it looks like his trousers have gotten dirty with sand. His claw has a subtle metallic finish, as do the various buttons, buckles and studs that detail his clothing. All of this works well to further emphasise the excellent sculpting.

That said, there are a few spotty parts to the paint work. I’ve noticed issues on his belt, where the white lining is quite messy, as well as a couple of spots where paint has wound up where it doesn’t belong, such as spots of gold paint on his shoes. Also, after displayingÂ him for some time, the gold paint on his claw has started to go tacky – cleaning it with diluted soap has helped reduce the problem, but it’s still a concern. There are also some visible production marks here and there. This includes a few visible seams, notably on the top of his shoes and along the sides of his fingers. Mine has a deep scratch on his coat as well, which might not be a common issue, but is worth mentioning.

Overall though, the majority of these flawsÂ are veryÂ minor, and they’re mostly well hidden (such as the production seam wisely placed along the underside of his claw). They certainly won’t stand out at the usual viewing distance – in fact, I didn’t notice most of these problemsÂ until I gave him a closer look for this review. As far as prize figures go, Crocodile is one of the best that I’ve seen, and certainly among the best that I own. He looks great, he’s well made, and he doesn’t cost veryÂ much. In short, he’s everything you’d want from a prize figure.

If I have any complaints, it’s that he’s a little bit on the small side and theÂ production does have its weak spots, which is a shame given his excellent sculpt. At the same time, his wide and low stance makes him an odd fit amongst other figurines, which is something to consider. At the end of the day, though, I’d give this oneÂ a solid recommendation, especially to anyone who wants a great Crocodile in their collection.

This version of Sir Crocodile is an excellent little budget buy – certainly worth a look for One Piece fans.