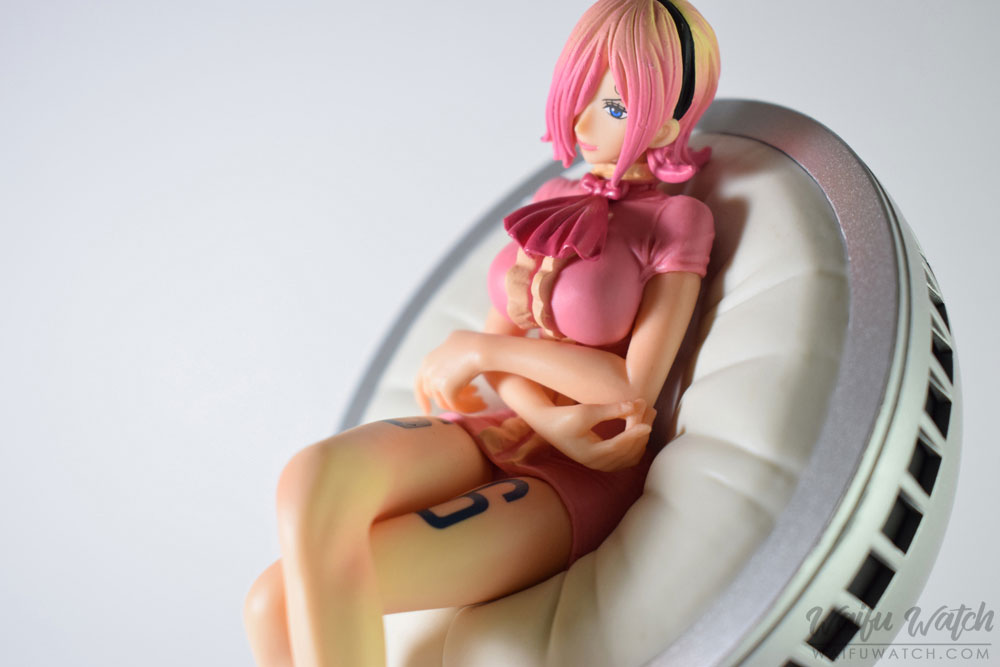 One Piece is a series that’s well known for its cast of colourful characters. This time we’re here to look at a recent addition: Vinsmoke Reiju, member of the Vinsmoke Family and the Germa 66. This rendition of Reiju is a prize figure, and is part of Banpresto’s Grandline Lady series. She also falls under the  DXF Figure and Grandline Series umbrellas, and manages be part of two different “Vinsmoke Family” volumes at once. When you write it all out, it’s a bit confusing.

But let’s not get bogged down in all that, and instead focus on the figure itself. I’ve noted in a few other reviews that I’m a fan of prize figures, primarily due to their affordability. Reiju is no different – I was able to pick this one up easily for less than ¥2000. Prize figures do have some drawbacks as a result of their lower production values, though. We’ll go into this a bit later, but for now, let’s just make it clear that Reiju is a tasty little figure.

I’d like to emphasise the word “little”. Upon first impressions, Reiju’s diminutive size stands out most of all. This figure is less than 5″ tall, which is a bit of a shame, because the pose and design are very appealing. That said, I appreciate figures that don’t take up too much shelf-space, and Reiju is certainly compact, even when you include her bubble chair. Reiju forms part of a collection with the other members of the Vinsmoke Family, so it stands to reason that you wouldn’t want them to be too big if you plan to collect them all.

That aside, this is a classy and sexy piece. Reiju’s charming pink dress accentuates her ample bosom, and cuts off high on her thighs to expose long, shapely legs, crossed in alluring manner. It’s a very attractive pose, although I did notice something a bit odd about it. In promotional photos, as well as on the cover of the box, Reiju’s head is straight up. In the final product, however, her head is tilted slightly. It’s a small difference, but it does affect the mood of the pose just a little.

Reiju arrives in a bog-standard, no-frills box, which is no surprise. The design is consistent with Banpresto’s other figures in the series, with clear pictures of the figure on each side. A gold Toei sticker can be found on the lid, which should help with authentication. A cardboard frame secures the figure’s three separate pieces. This leaves quite a lot of space left unused, which seems a bit wasteful – but let’s worry about reviewing the figure and not the box.

It’s very easy to assemble the figure. Reiju herself is a single piece, while the chair’s separate base easily fits onto the body. Unfortunately, the base on my chair has a noticable scratch in the paint. This could be a result of the way it was packaged, or simply a manufacturing flaw. Regardless, it’s not a major issue. You can then place Reiju comfortably in her seat to complete the piece. Reiju’s body is fully sculpted, front and back, which is a nice touch. It would have been very easy to leave it flat, or include pegs or grooves on her back to secure her better. You can sit her just about anywhere you like, because she’s quite well balanced. I’ve had her sat on my monitor as I write this review – it’s kinda cute! 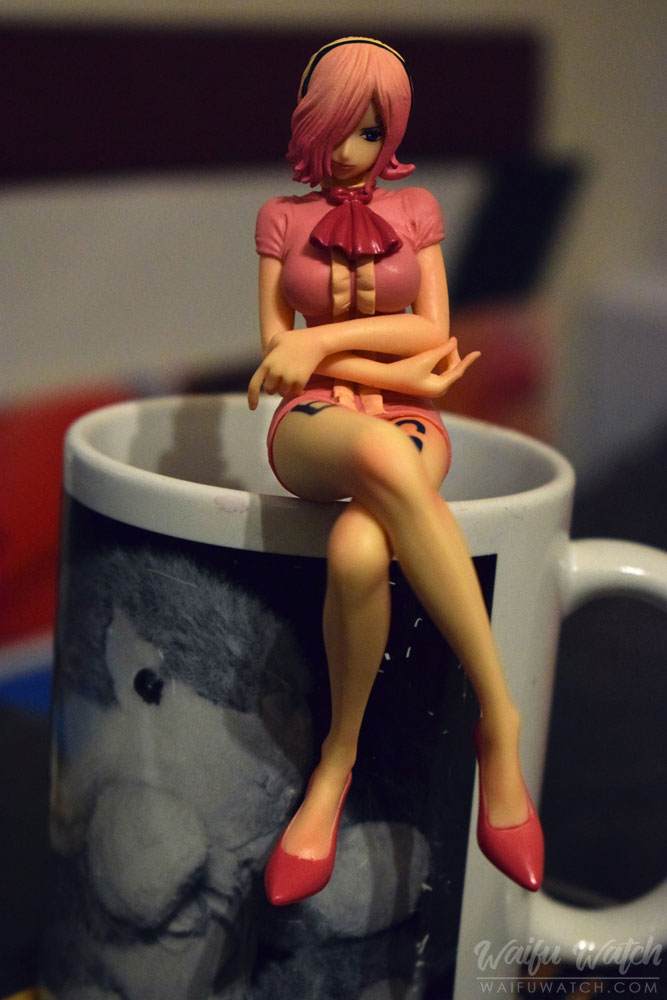 Despite being quite small, Reiju has a solid sculpt. Her legs are long and shapely and feature well defined knees, ankles and thigh muscles. Since Reiju’s pose places strong emphasis on her legs, it’s important that they impress. Her dress hugs tight to her bosom and is creased in the right places, while her high heels are sharply crafted as well. However, because this is a prize figure, Reiju is not without some issues. Her cravat and the ruffles on her dress are quite blobby, which makes the figure look a little cheap. This blobbiness can also be seen at the tips of her hair, which is otherwise well defined. Reiju’s face is also a bit off. It’s hard to describe exactly what the issue is, but thankfully it’s only noticable when viewing her from her right side.

Aside from the sculpt itself, Reiju does have some visible production seams. These are notably found running down the front of her legs and shoes, and along either side of her dress. Thankfully, they aren’t especially noticable and certainly don’t spoil the figure.

The paintwork is similarly hit and miss. Reiju’s vibrant pink hair is painted with a rough gradient effect which does look nice enough at a distance. However, it’s an odd choice, since most art depicts her with plain pink hair. Her black hairband has been painted very sloppily and as such stands out badly. It’s perhaps the largest weakness in quality that the figure has. The paintwork on her skin is more promising though, using a rosy blush effect to define her legs. It’s clear that Reiju’s legs are the focus of this figurine. Unfortunately they went a bit overboard in some spots, particularly her thighs, resulting in a slightly sunburned look. Otherwise, the paint job is of the “basic and functional” sort, without much attention paid to shading.

On the bright side, her eye and her leg tattoos are printed clearly and crisply, while her lipstick is applied neatly too. The egg chair also has a pleasing glittery finish for a metallic look. Altogether, the quality is about what you’d expect from a prize figure.

Reiju is altogether quite an odd piece. She presents a lot to like: here we have an attractive and decently put together figure, available at a great budget price. But I can’t help but look at her and wish that she was bigger and better, because this is a sexy pose with a lot of potential.

Ignoring the quality drawbacks of prize figures, Reiju’s size is certainly going to be a make-or-break feature for many collectors. However, the idea of collecting the whole Vinsmoke Family is quite fun (although I doubt I’ll pursue the others myself). I’ll be looking out for other renditions of Reiju in future, because I really do like her design a lot – but this works nicely as an appetiser, in the meantime.

Reiju is a sexy little figure – emphasis on “little” – but for all her charms, she leaves me wanting something bigger and better. Despite her questionable size, you’ll find a well made prize figure here, with only one or two obvious flaws pulling it down.

All in all, if you’re a fan of the character, you might want to pick this one up – but I wouldn’t blame you if you waited for something a bit more substantial. Fans of the Vinsmokes in general might enjoy collecting the full set, though.