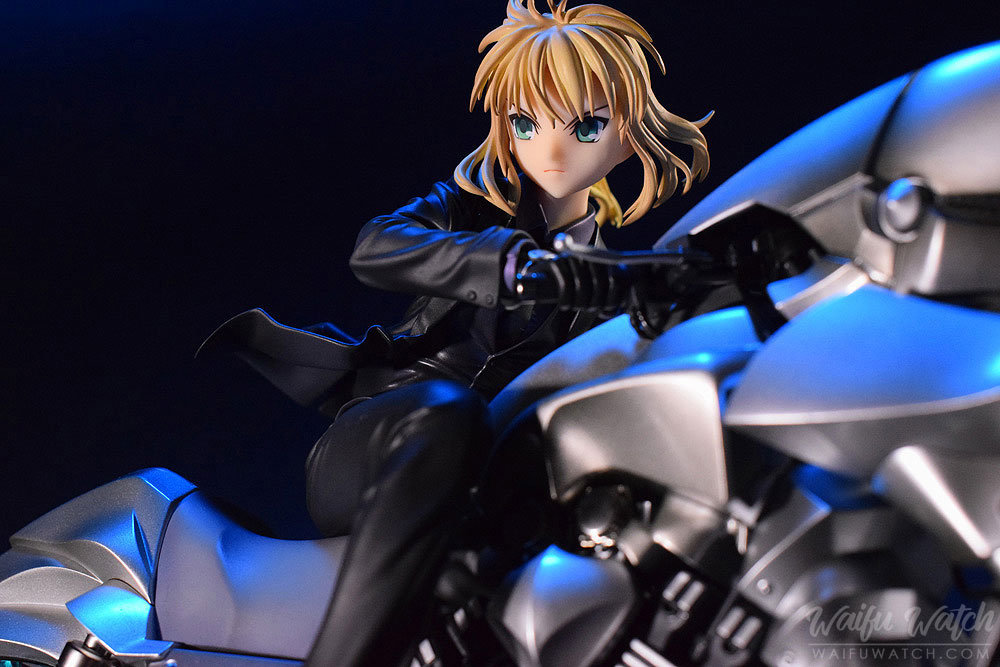 This time we are taking a look at Saber, TYPE-MOON’s iconic King of Knights, and her armoured motorcycle, the Motored Cuirassier, as they appeared in Fate/Zero.

In this photoshoot, three diffused lamps were used – two white lights on either side, and a blue light from above. The white lights were flagged to keep the black card backdrop dark, keeping the emphasis on Saber. It was tricky at times making sure that everything was in frame, but her dynamic pose looks great from almost every angle, and there are plenty of details to focus on.

I have been a big fan of Saber since I saw the original Fate/Stay Night anime way back when. When this figure first released in 2012, I decided it was a must have. Good Smile Company’s rendition of the Fate/Zero design really ticks all of my boxes – she is wearing a classy black suit and wielding Excalibur, looking like a badass, and all on the back of a pretty sweet motorcycle. What’s not to like?

The figure itself is very impressive, as you’d hope for the price tag. The assembly is a bit frustrating, thanks to an awkward foot peg that doesn’t seem to work as intended, and a reliance on balancing her just right atop the bike. Despite that quibble, the figure is high quality throughout. This is a very attractive piece, with plenty of attention being paid to the details on both Saber, the Motored Cuirassier, and the base. She is quite wide, so she might be tricky to fit on some shelves. That said, she looks great, and I am thrilled to finally add her to my collection.

Hmm is anyone elsе haѵing problems with the ρictures on this blog loading?
I’m trying to figure out if its a problem on my end or if it’ѕ the blog.
Any responses would be greatly appreciated.

Looks fine on my end.