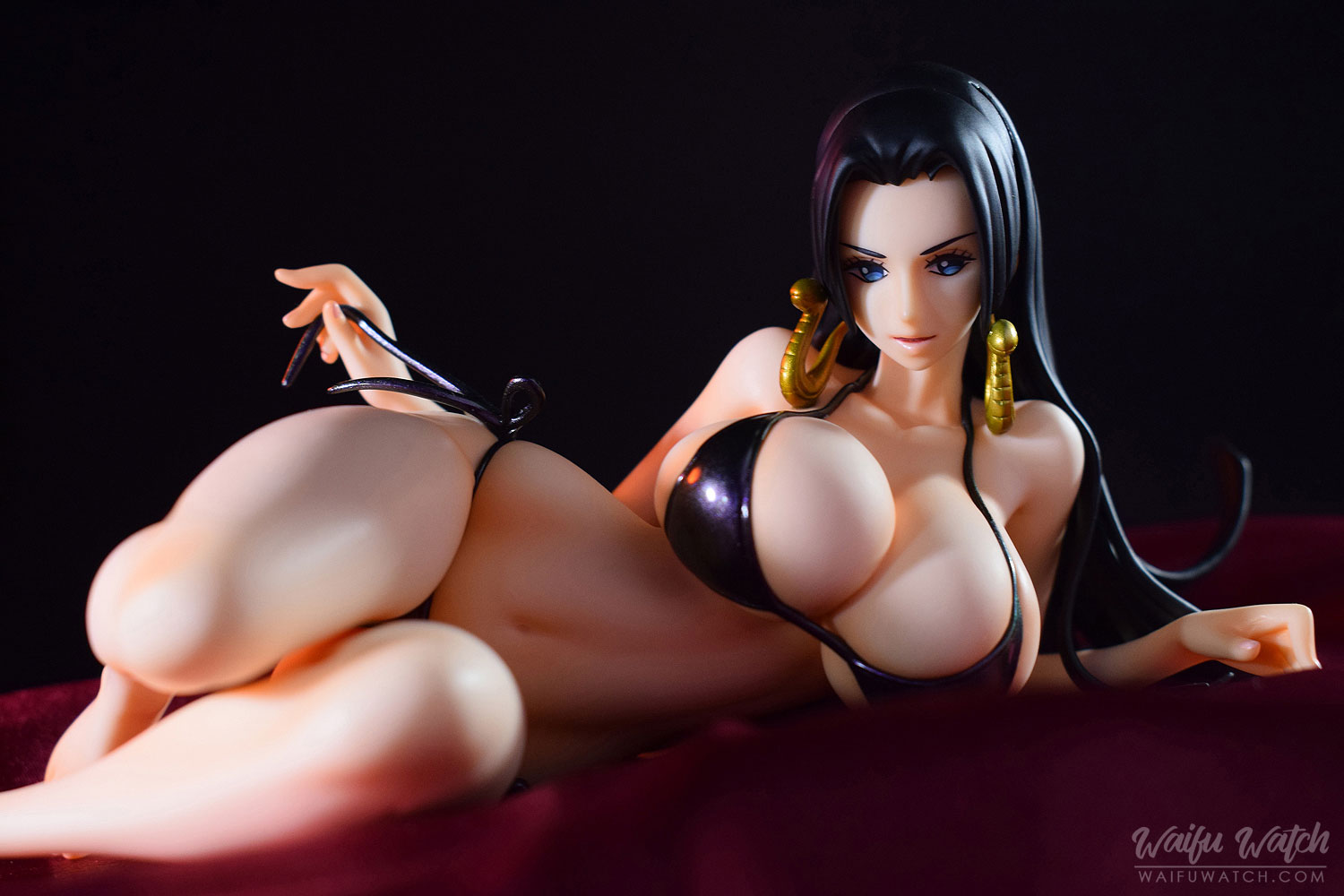 To me, there is no such thing as gods and men. Because… I’m beautiful.

Anyone who’s been following One Piece for a while is sure to be aware of Boa Hancock, the Empress of the Kujas and Warlord of the Sea. She’s one of the series’ most consistently popular characters, no doubt down to her seductive character and alluring appearance. Boa is a powerful woman who believes that she can do whatever and take whatever she likes, yes – because she is beautiful. Those whose hearts are captured by lust for her are turned to stone, much alike the victims of a Gorgon.

This time, we’re taking a look at MegaHouse’s latest rendition of Boa. Much like the last MegaHouse figure we reviewed in our previous look at Kalifa, this is a Ver. BB  figure (which means ‘Bathing Beauty’, if you were wondering). Ver. BB figures have a heavy emphasis on the character’s curvature and sex appeal, and are usually dressed in provocative swimwear. The proportions can be a little gratuitous, and not necessarily faithful to the original designs, but these are intended to be the ultimate in fanservice figures.

First impressions of this figure are favourable – Boa’s pose is alluring, and her body has some ridiculous curvature. Her breasts are practically spilling over, barely contained by her bikini, and her legs are lovingly sculpted from thigh to toe. There are some quibbles – her face is a little bit off, for example, but I don’t think it takes too much away from the figure. Overall though, she’s very impressive, and should look great on your shelf.

Speaking of shelves, Boa might be a tricky figure to display for some people. Being laid down, she doesn’t have much vertical presence and might look a bit odd among other figures that are stood up. If you put her in something like a Detolf shelf, she’d probably look a bit lost. However, it does mean that you can put her on shelves that aren’t very tall, which is what I’ve done myself. In that situation, she makes a great focal piece.

Boa’s box, like Kalifa’s, features clear and appealing design. Large, crisp photos of the figure adorn almost every side, with appropriate backdrops that make for a colourful package overall – Boa gets a beach and love-hearts, suited to her Mero Mero abilities. MegaHouse figures tend to arrive double-packed, with a brown outer-box that simply feature the MegaHouse logo and the name of the figure, and Boa is no different there.

Inside the box, you’ll find Boa and her stand. That’s really all there is to it – everything is packed securely, and there’s no assembly required. Much like Kalifa, Boa doesn’t attach to the stand in any way, and simply lays atop it.  The stand itself is quite gaudy, with a hot pink rim and a mirrored surface. I’m not really a fan of mirror stands, for a few reasons. Their primary benefits are that you can easily look up a figure’s skirt (if that’s your thing), and the mirrored surface reflects light to help the figure’s features stand out. Obviously, Boa’s not wearing a skirt, so that’s not really relevant.

The downside is that mirrored surfaces smudge and scratch very, very easily, and those marks are very visible, too. In my opinion, the benefits of mirrored stands are usually outweighed by the problems. That said, Boa actually looks quite handsome atop her stand – my only complaint would be that they picked such a garish colour for the rim. A classier colour like black, or perhaps gold, could do a lot to make the presentation less tacky. The mirror also does do its job of helping to light up her belly and breasts, which I appreciate.

Boa has been exquisitely sculpted in almost every facet. Putting aside preferences about proportions, this figure seems to have been made with a lot of love. It feels as if the sculptor, Inada Motoki, put in effort to ensure that every curve slopes smoothly, from the obvious buxom breasts and buttocks, to the groove on her tummy and so on. Boa’s long hair curls up at the back where it touches the ‘floor’, and her bikini snugly bites into her voluptuous curves – these are details that really make the figure look outstanding. Her fingers and toes are all nicely shaped, and have defined nails, and her earrings have been crafted remarkably well. If you’re a fan of breasts, thighs, feet, hands, hips, tums – whatever tickles your fancy – well, Boa seems to have you well covered.

The details even continue to creases and folds in her flesh where her body bends and twists into this scintillating position. The space between her legs has been given a lot of attention, for those inclined to look at the figure from every angle, and her back is dimpled, too. Her collar bones are subtly crafted, as well. Her hair is quite thick, and flows nicely over the back of her shoulders, though some might find it a bit bulky and thick. 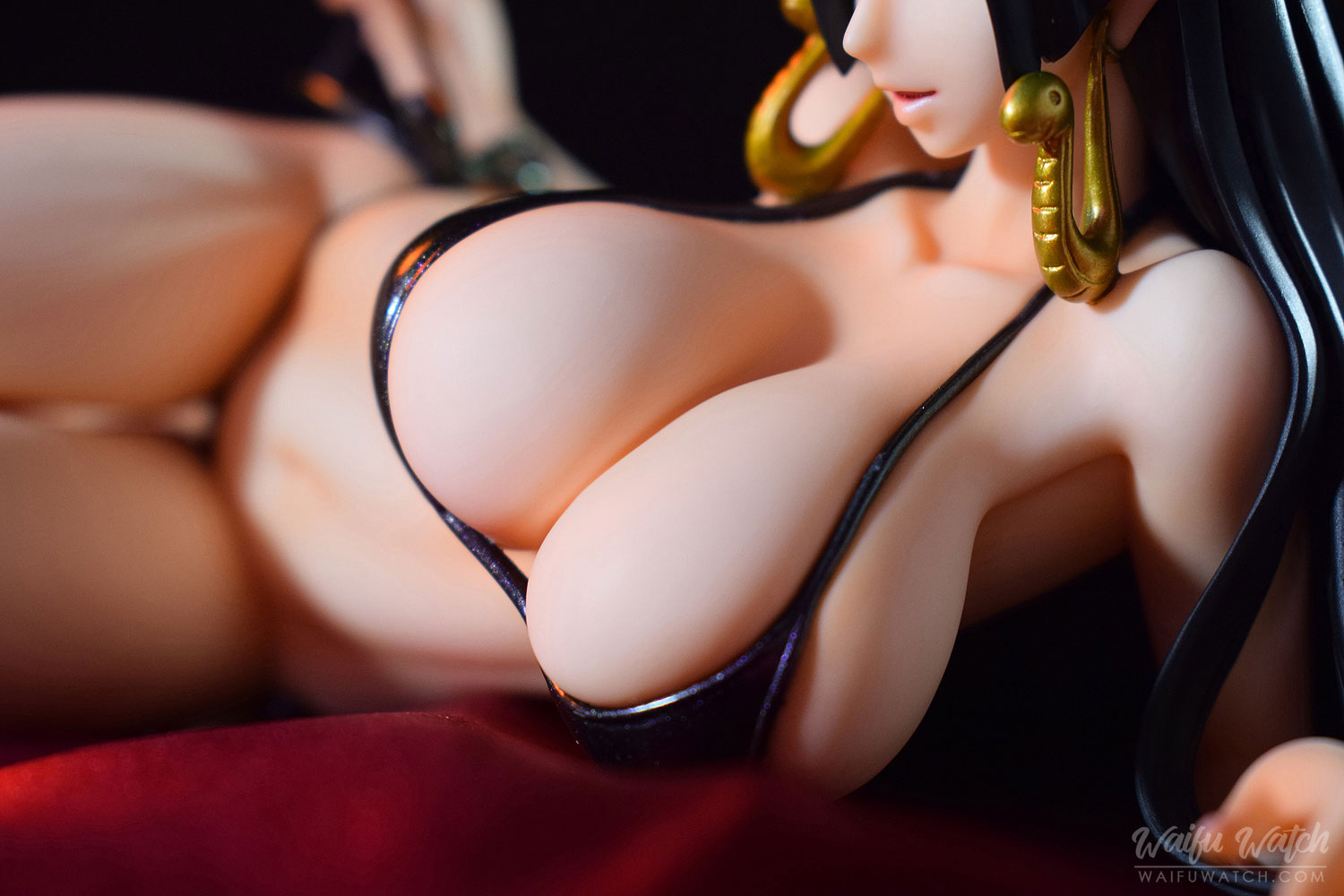 While the quality is outstanding overall, there are a couple of flaws worth mentioning. These aren’t so much ‘flaws’ in production as they are conscious decisions, I suppose, but they hurt the figure in my opinion. The first is that her head and face are a bit off-model compared to Eiichiro Oda’s original design. Her hair is a bit too ‘big’ on top, and her expression just looks a bit funky from some angles. I don’t necessarily need a perfect likeness, but the resemblance could be better. The second is that there’s a really obvious seam between the front of her hair and the back, which goes right across the top of her head. You see this in a number of figures, and very, very rarely is it disguised well enough to not become a distraction. Still, I think these are flaws that aren’t too hard to overlook in the face of her body sculpt.

To compliment her top-notch sculpting, Boa has an excellent paint-job, too. The first thing that stands out is her bikini, which has been painted with a pearlescent purple paint. That means that, when the light hits it right, the colour changes to a sort of dark green. This paint also has a subtle glittery quality, and is quite glossy. This all adds up to make her bikini a pleasure to look at, from all sorts of angles – depending on how the light hits it, or how you’re looking at it, the bikini might look different every time.

The paint-work continues to impress elsewhere, thanks to the nice selection of appropriately used finishes. Her shiny gold ear-rings stand out against her soft, rosy skin, and her hair is neither too glossy or too matte, striking a nice balance. Clever use of subtle shading helps to emphasise the contours of Boa’s body, especially around her tummy and rump. Her finger and toenails are indivdually painted, and her lips have been given a touch of colour, too. These subtle details help round out the figure’s appealing look. The paint has all been applied perfectly well – I certainly couldn’t see any errors, so if there are any, they must be very minor. 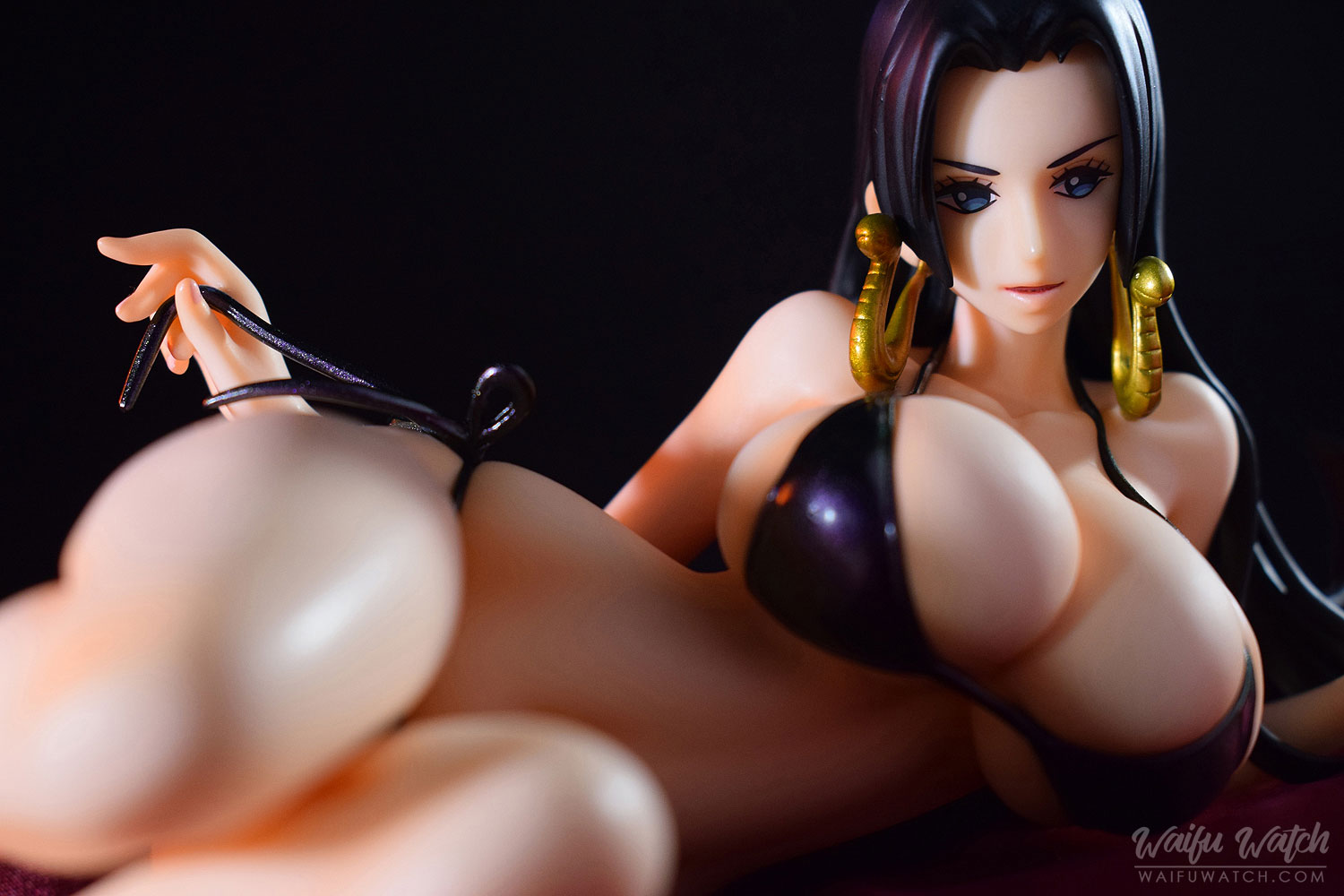 The beauty that a thousand men have bowed down to. In my own way, I’m a One Man Army.

MegaHouse have impressed me again with this rendition of Boa Hancock. Barring one or two issues with her face and hair, she’s a wonderful figure to look at, and would look great on any shelf that has room for this bikini-clad bombshell. Her stand is a bit tacky, and that does hurt the presentation, but it’s not a major blow, and you don’t even need to use it (as the photos have hopefully emphasised). Like Kalifa and the other Ver. BB figures, Boa’s proportions may be a bit gratuitous for some people, but I quite like the extra curves. As a figure that was obviously made with pure fan-service in mind, Boa delivers in significant excess – this is a really sexy piece of work.

All that said, I’d definitely recommend this for anyone who likes what they see, and doesn’t mind putting something so obviously saucy in their collection. If you’re looking for a sexy Boa to augment your One Piece collection, or just like figures of curvy babes, you can’t go wrong here. This figure really is as good as it looks.

MegaHouse’s latest rendition of Boa is a tasty treat for anyone looking for something sexy to add to their collection. With curves that seem to go on forever, and an alluring pearlescent bikini, Boa stands out from the crowd in more ways than one. While the exaggerated proportions might not be to everyone’s taste, there’s no denying the quality and craftsmanship that has been put into this figure. I fully recommend it to anyone who likes what they see.

This photoshoot was perhaps my most elaborate in a long time. I used three diffused lamps – two white, one yellow – and shot against a black card backdrop. The lights were flagged in order to keep the background as dark as possible, preserving a sense of depth. In order to help with the angles and lighting, Boa was sat atop a stack of 3DS boxes that acted as a riser. On top of that, red satin was used to create the ‘bed’ for Boa. Lighting her properly was quite tricky, and required a couple of reflectors to help even out the lighting on her front, but I think the effort paid off in the end!