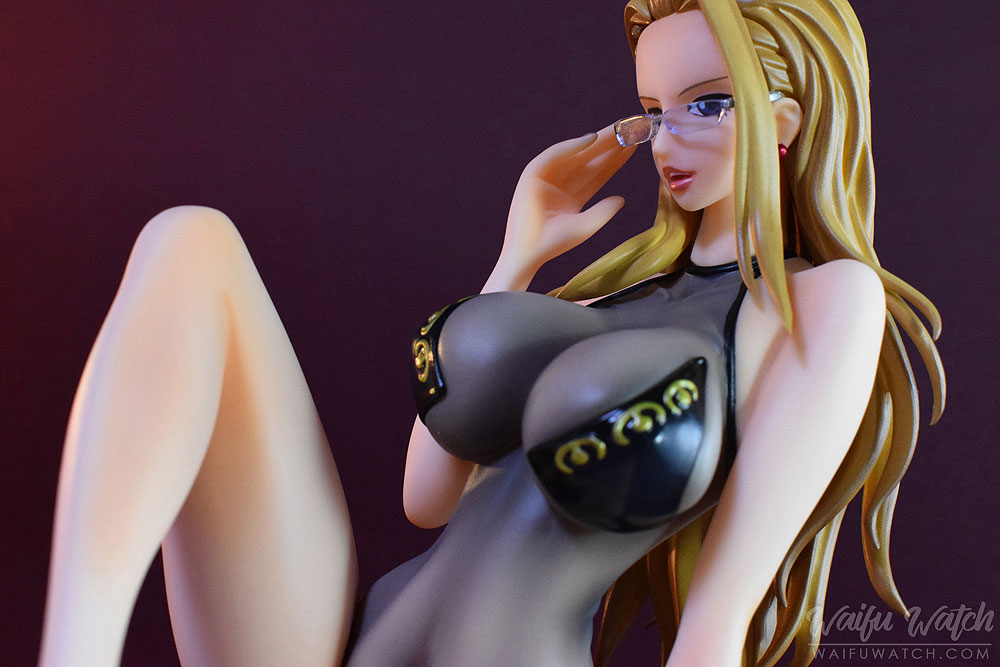 Today we’re looking at one of the latest additions to Megahouse’s One Piece – Portrait of Pirates line. Although this one should be “Portrait of Secret Government Spies”, shouldn’t it?

Kalifa, a member of the government’s secret CP-9 organisation, is the “sexy secretary” type, but as you can see, she’s tossed aside her formal wear in favour of a sultry black swimsuit. This is because she’s part of the “Ver. BB” collection, which features many of the wonderful women of One Piece in all sorts of lovely (and skimpy) beach wear. The collection is reputed for its figure’s provocative proportions and poses – these are figures for perverts, more or less. But what’s wrong with that? While the occasionally exaggerated assets may not be to everyone’s taste, these figures are generally regarded to be of good quality.

From first impressions, “Carifa” looks great. She’s an interesting size, too. Because she’s sat down, Kalifa only measures about 4 inches tall. She’s not especially stretched out either. As a result, she’s very space efficient, which is nice for people who don’t have a lot of room to spare.

Visually, she stands out – her body language is very inviting. Kalifa’s shapely body curves and slopes in all the right places, and she has a lovely pair of long, lithe legs. Her breasts and bottom are perfectly plump, and her stomach slopes appealingly. To top it all off, she has a pretty face and an enticing expression, peering over her glasses at you. This is definitely a sexy bit of work, although I can see where the proportions might put some people off. If it is to your taste, though, then Kalifa won’t disappoint.

But before things get too hot and heavy, let’s go over the basics. Kalifa comes in a pretty standard box, which insists she’s called “Carifa”. It looks really nice, featuring clear shots of the figure and some appropriately soapy designs. They even used a backdrop that looks a lot like Water 7, which is pretty neat (even if it took me a while to catch on to it). The box itself feels thick and sturdy, and the plastic casing inside is very snug in the box, so you won’t have to worry about her rattling around in transit.

While it’s not pictured here, this box actually came inside another box. It’s a plain brown box made of thick cardboard, with a few Megahouse logos printed on it, as well as the figure’s name. Not too thrilling, but worth noting nonetheless.

Inside the box you’ll find Kalifa, who is a single piece, as well as her stand (which, again, insists that it’s spelled “Carifa”). Kalifa doesn’t actually attach to the stand in any way – she just sits on top of it. If you don’t like the stand (which is a bit gaudy looking), you can easily do without it and save yourself a bit of shelf space.

Also included in the box are Kalifa’s glasses, which you’ll need to put on yourself. This can be a bit fiddly, and I’ve seen some photos where people have put them on wonky. Please, put them on straight. She needs them to see!

You also get – as pictured above – an extra set of glasses. Unlike the ‘default’ pair, which are made of plastic, these are simply metal frames. As you can probably gather, you’re supposed to pop them out and fold them into shape. At first I was quite impressed, because I thought there were eight different styles, but it’s actually two styles with three spares each. Still neat, but a bit less exciting. I’m fairly certain I’ll never use these (because I’d surely ruin them, somehow), but it’s a very cute touch. You can tell they were thinking of glasses fans when they made these.

Kalifa looks great, even without her glasses.

Kalifa is clearly very well sculpted. Each inch of her body is lovingly shaped to create that sexy, sultry look that makes this figure work. Her legs in particular are very attractive, with slender calves and delicate ankles. She’s curvy from top to bottom, and those curves are smooth and sloping. It’s easy to find your eyes being led up and down her body, taking it all in. Her stomach has pleasing ridges, and there are small dimples on her lower back. When these catch the light, she really does look gorgeous.

Kalifa’s breasts and bum are very exciting too, with thick curves that are sure to allure. It’s almost amazing how much love went into sculpting her lower body, particularly her bottom and the space between her thighs. You’ll almost never notice it unless you look, because she’s sat down. But if you tip her over and take a peek…

But seriously, take a look at her backside – it really is a treat.
Just be careful if you do this sort of thing – while taking these tipped-up photos, Kalifa sadly got a small scuff on her hair that’ll need touching up later. That’s the pervert tax, I suppose.

Let’s bring our eyes back up, though. The attention to detail continues to show in her hair and face. Her hair is thick and volumous, though perhaps a bit chunkier than you might like. It still manages to be detailed and layered though, and it accurately captures her look.

She has a very attractive face as well, with a slim nose and plump lips. The glasses seem to be a point of contention for some people, but I quite like them – I like the way they interact with light, and they suit her quite well. At worst, they’re inoffensive and they’re entirely removable or replacable, thanks to the included frames.

The appealing sculptwork is complimented by excellent paint work. That’s probably a good thing, because Kalifa’s ridiculous swimsuit is quite literally painted on. Still, it’s painted on very well, with plenty of subtle shading and toning that emphasises her body’s shapeliness. So at least there’s that. The rest of her skin is warm and rosy looking, with very subtle shading helping to emphasise the contours of her body. Her hair is well shaded as well, adding more definition to her flowing locks.

The variety of finishes is quite pleasing, too. Kalifa’s breast cups and high heels have a high gloss finish that reflects light, while her swimsuit bottoms have a very subtle glittery finish that, again, you’ll only really spot if you tip her up for a better look. Her lip gloss looks great, as does her nail varnish. The little details help to make Kalifa stand out, and those little details are painted with an acceptable level of neatness. There’s the odd little hiccup on her nails and the embossing on her swimsuit, but it’s so minor that it’s barely even worth mentioning. You’ll basically never notice it unless you’re looking for it.

This is a really attractive figure, without a doubt. Kalifa’s sex appeal is captured splendidly, head to toe – her curves are bountiful and buxom, and her legs are long and lush. But she’s not necessarily for everyone, since her proportions are perhaps a bit exaggerated. I’d also argue that she might have looked nicer with a more traditional bikini or swimsuit, rather than the weird bikini/body-paint hybrid she’s wearing here. I’ve also heard some complaints that her scale doesn’t quite match other figures in the same series, though I don’t have any others to compare her to as of yet – still, it’s something to bear in mind if you’re collecting the set.

But all in all, I really like this one. She’s a sexy piece of work that fits nicely on my shelf, without taking up more room than she needs to. If you don’t mind having something a little lewd in your collection, and you happen to like saucy bespectacled women, you might want to pick this one up.

Megahouse has done a great job with this sexy rendition of Kalifa. There’s a few things holding her back, like her unusual swimsuit design and slightly exaggerated proportions – but if those things don’t bother you, then she’ll make a gorgeous addition to your collection.