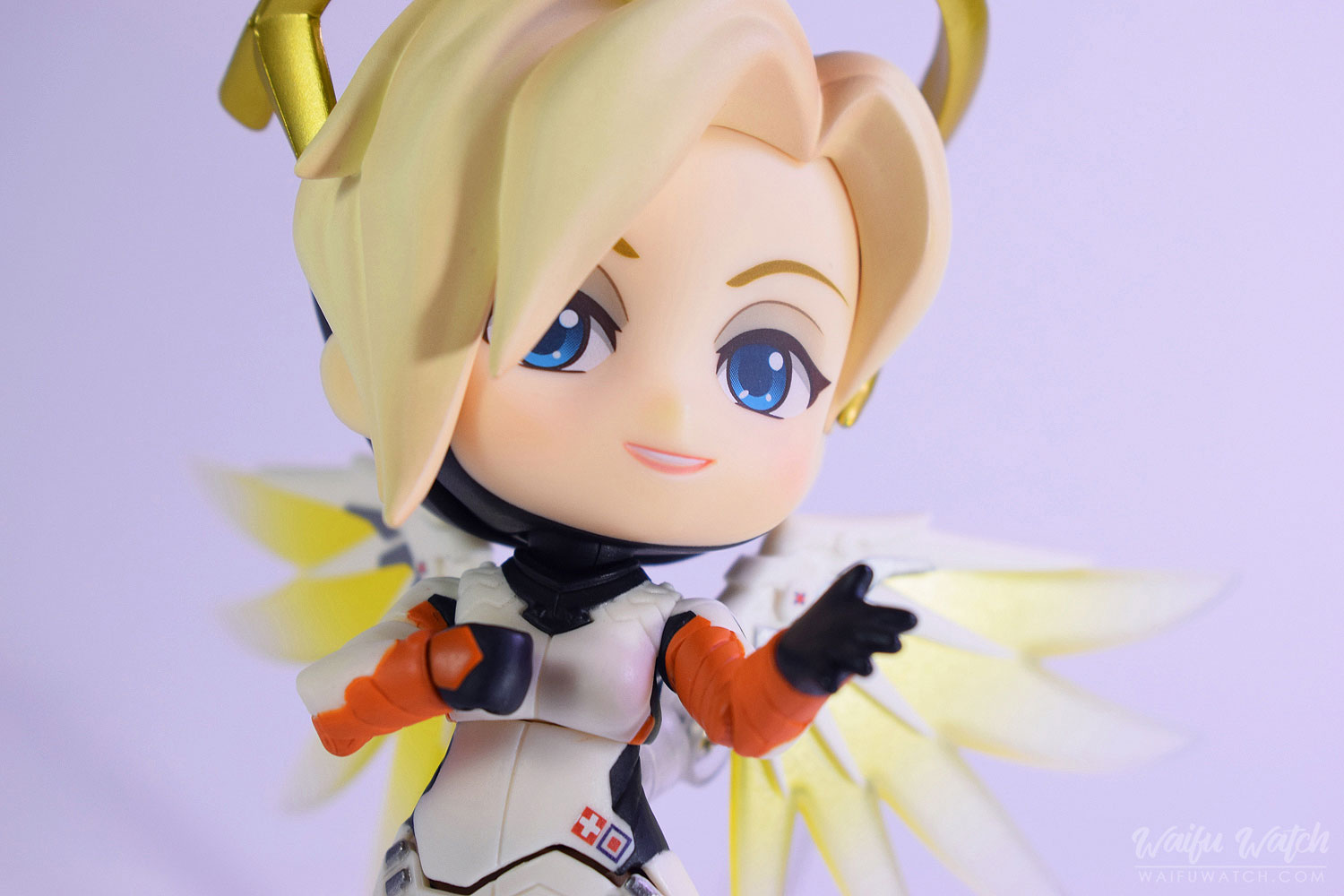 I’m not a miracle worker. Well… Not always.

Blizzard’s popular hero shooter, Overwatch, probably needs no introduction. Mercy (aka Angela Ziegler) is the game’s predominant medic class archetype, and is not so subtly modelled after the concept of an ‘angel of mercy’. During the brief time that I played the game, she was one of my favourite characters, both in her design and her gameplay (although playing a healer always has its ups and downs).

Similarly, Nendoroids are probably a known concept to anyone who’s into collecting anime figures. For those unfamiliar, Nendoroids are Good Smile Company’s line of chibi-style character figures. These figures are sourced from all sorts of media – Western movies, Japanese games, and of course, a vast variety of anime. It’s telling that Mercy here is no. 790!

There’s some comparison to Funko Pops, but Nendoroids offer a much more premium quality and, in my opinion, much more appealing and faithful designs. They’re fully posable, and come with all sorts of interchangable parts and accessories, many of which are designed to be used universally between other Nendoroid figures. You can even kit your Nendoroids out with separately bought faceplate sets and generic themed accessories. This even includes full body swaps that let you put your favourite characters in whole new outfits, like wedding dresses and business suits. In short, they’re very collectible and customisable.

First impressions should be pretty obvious – Mercy is super cute! Her bright smile and chubby features really look great. Nendoroids are quite small (a bit smaller than Funko Pops), but they stand out nicely due to the bold colours and their focus on emphasising the character’s key features. There’s an obvious sense of quality here that comes through immediately. Because of their size, Nendoroids are pretty easy to fit in to your collection, too – unless you start going crazy and buying loads of them!

There’s not too much to say about the packaging – it’s a solidly put together box with appealing graphic design. This seems to be the standard Nendoroid box style. There’s plenty of pictures of Mercy on every side of the box, and a nice big window to look at the figure in the front. Everything is securely packaged inside, too – you’re not going to risk parts escaping and rattling around, unless you really put them back wrong. That’s good, since there’s a lot of extra parts here. 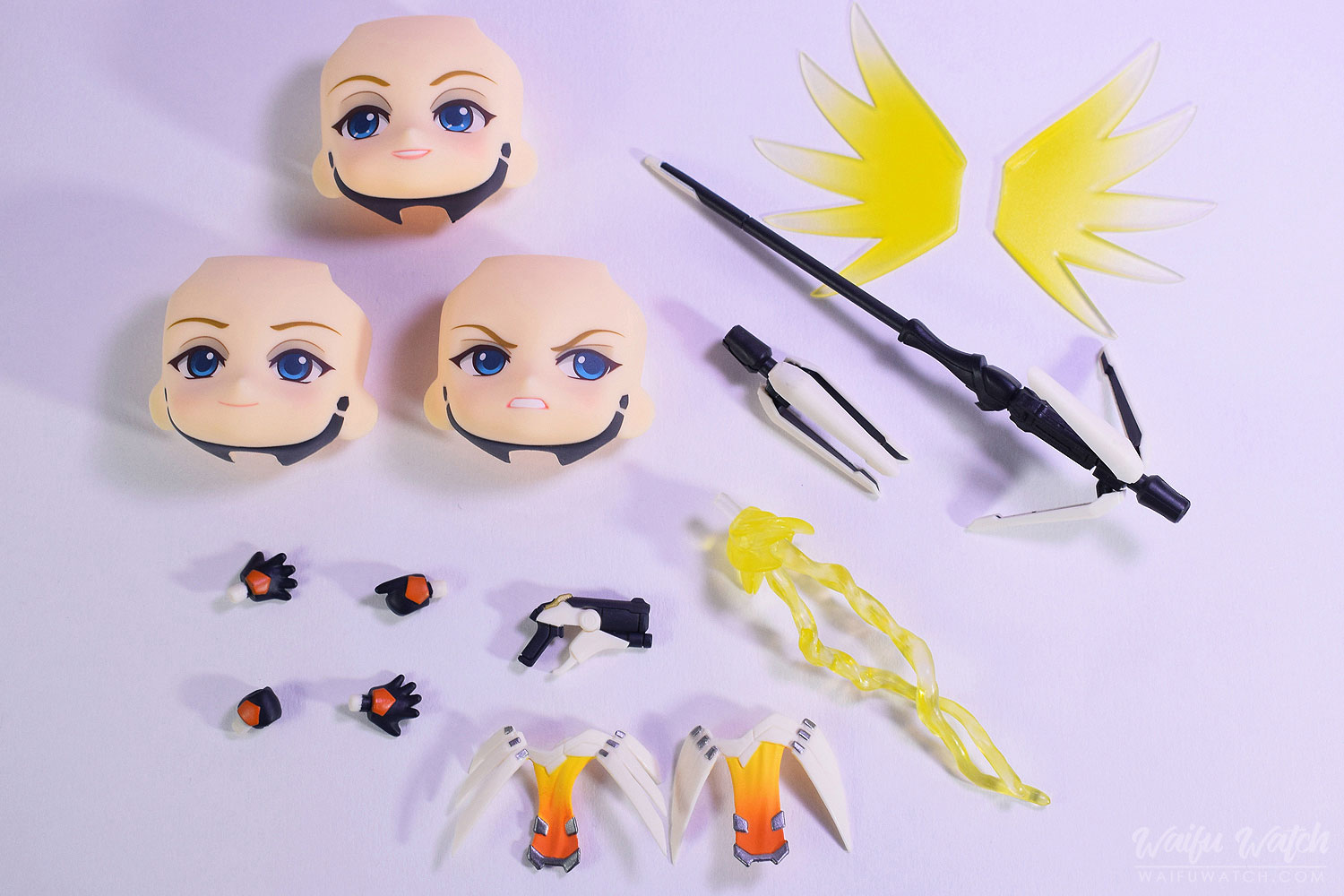 Speaking of extra parts, this picture shows you all of the parts you get in the box (minus the Nendoroid’s body and stand and a spare joint). There are three face plates, two pairs of hands, Mercy’s signature pistol and healing staff (plus options), a choice of skirts, and finally her glowing wings. All of these parts are easy to switch in and out, once you get to grips with it. Due to how snugly some of the parts fit together (particularly the hair and face plates), it can be a bit tough to pull them apart, but it does mean they won’t fall out on their own, which is very good. It never feels like you have to force things. Still, try to be gentle – these are small parts, and some of them are naturally going to be fragile. You don’t want to risk breaking or losing them with needlessly rough handling. If you’re having trouble, the box also includes assembly instructions in Japanese and English, which is definitely appreciated.

Since Mercy is quite small, we’ll cover her overall quality in one go. In short, Good Smile Company has done a great job here – as seems the standard with their Nendoroid figures. Despite being so small, Mercy has very few flaws, and those flaws are really nothing to worry about – you’re really not going to notice them. There are some spots here and there where the paintwork is a bit rough, but they’re in places that you won’t see, like the back of her neck. The use of bold colours is complimented by subtle shading and gradients, with cleanly applied decals tying the paintwork together neatly. Her additional wings and healing tether use a gradient into translucency that gives the illusion of a glowing and intangible object that you’d want from them. 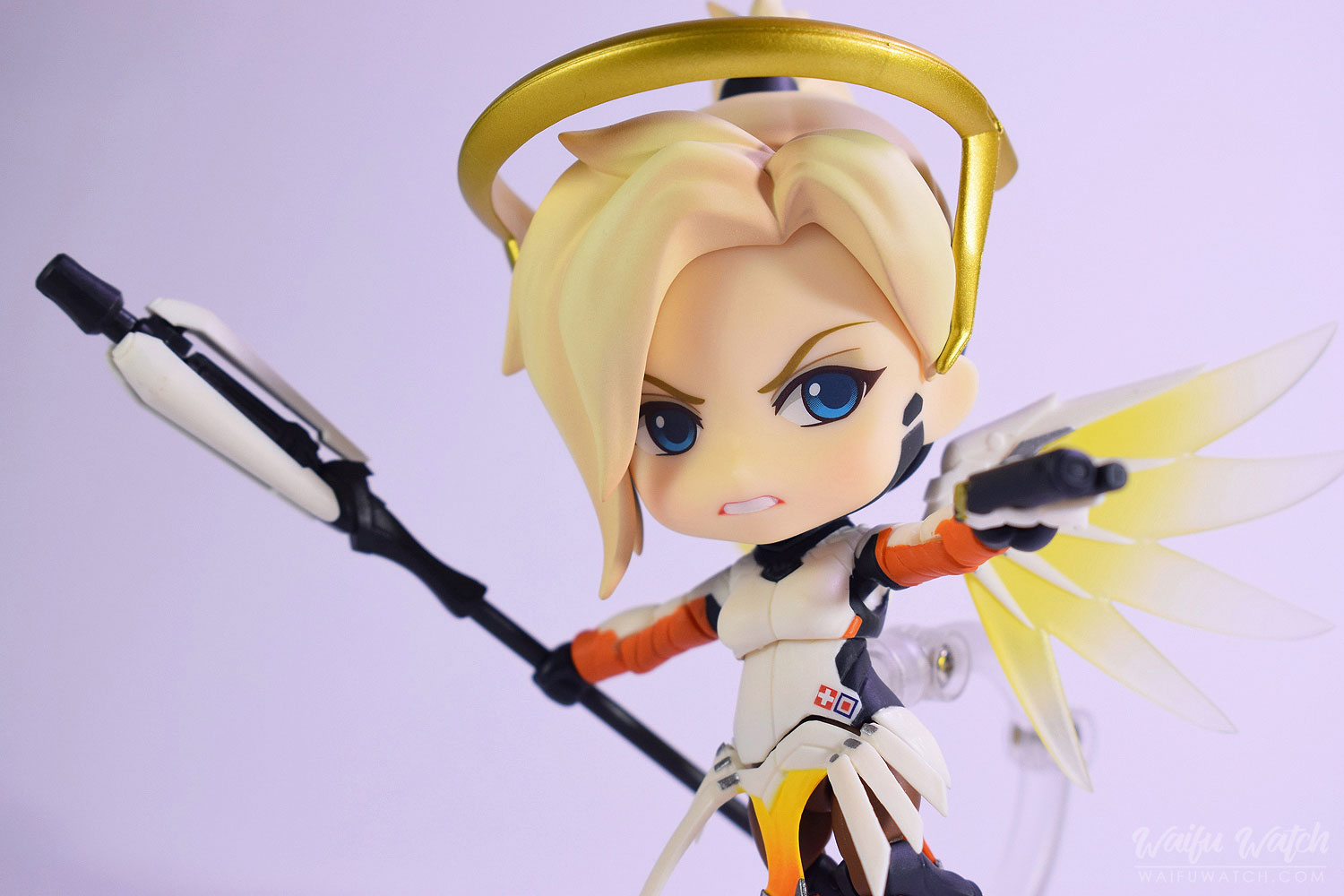 The sculpting is great overall too – her hands are perhaps the weakest feature, but they’re also the smallest. Once again, it’s not really worth worrying about – you’re not going to see them up close very often at all. Otherwise, the details in her uniform are sharply defined, and there’s no blobbiness to grumble about. As a posable figure, I’m glad to say that her joints are all firm, without being stiff. This means that she’s easy to pose, and once you’ve posed her, she’ll stay in the position that you put her in. She attaches to the stand’s adjustable arm easily, and it’s very secure (if a bit stiff), meaning you can have her floating in all sorts of neat positions. I do have a couple of quibbles, but they’re fairly standard with posable figures. The first is that both skirt options block her legs from doing very much – attempting to pose them in particular ways tended to cause her leg to pop off. This was also an issue with her arms, which would sometimes wriggle out of the socket a bit if you were moving them around a lot. In both cases though, it just meant nudging them back into place, which isn’t much hassle at all. 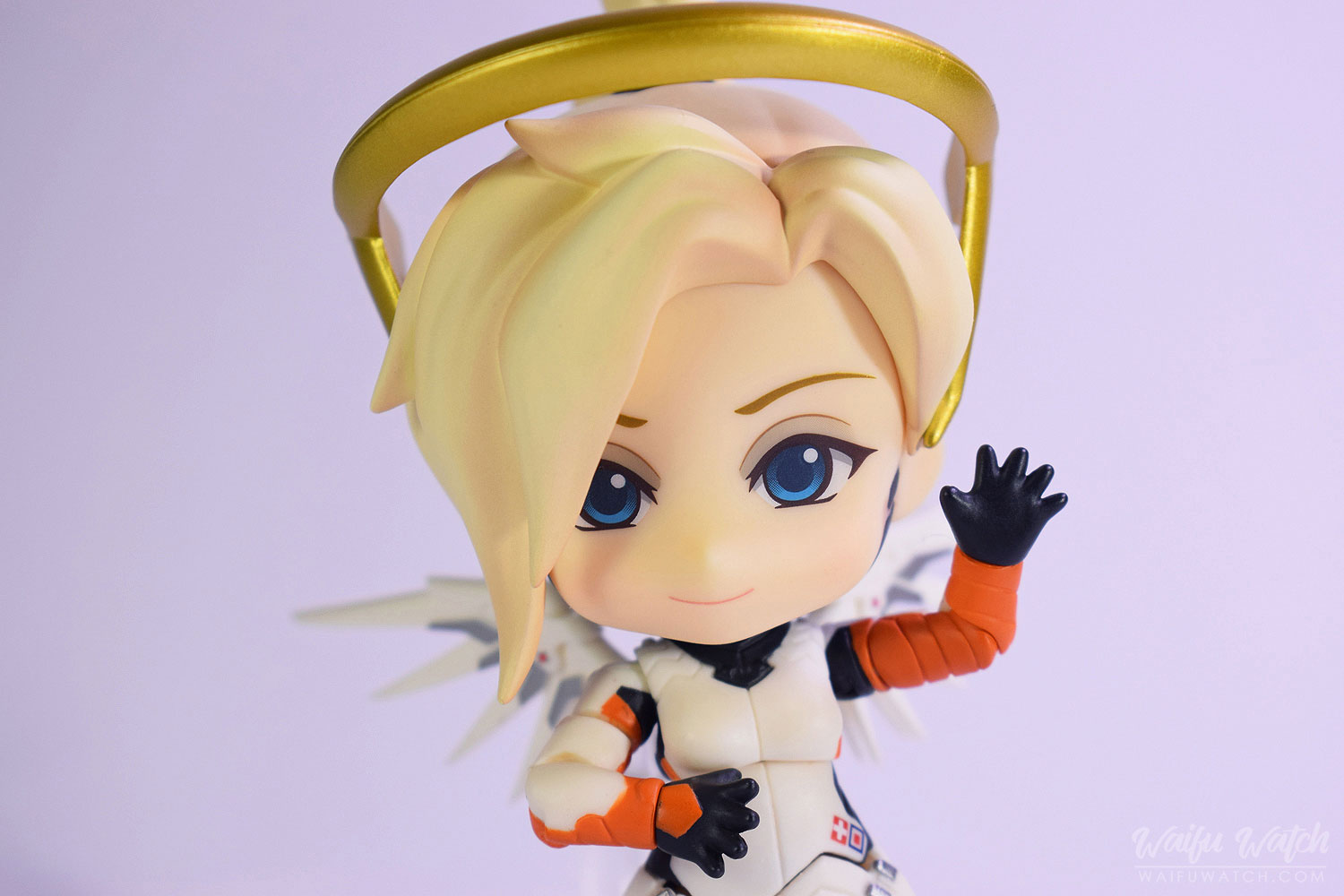 Mercy is my first Nendoroid, and I have to say that I’m really impressed. I can certainly say that I’m looking forward to getting more Nendoroids in the future – they’re delightful little things. Mercy has never looked cuter! Despite being a dinky squidger of a figure, she’s still bold and full of details that are faithful to the original design. It’s a wonderful figure to have – I think Mercy fans will really appreciate this one.

I do have a couple of small quibbles that prevent me from giving this one a perfect score, but they’re very, very minor. The most notable is that Mercy’s customisation options, while nice, are a bit limiting. There are two quite similar smiles, and her hand options aren’t great, mostly existing to facilitate her accessories. As well as that, her skirt gets in the way of her legs, which does limit her posing potential. I’d also imagine that she’d be harder to mix and match parts with with than many Nendoroids due to her design – although that’s not really something to hold against the figure itself.

Overall, I’d give Mercy a thorough recommendation. It’s a lot more expensive than picking up a Funko Pop, sure – but I think the difference in quality more than speaks for itself.

Good Smile Company have done an excellent job of capturing Mercy’s charms with this adorable rendition of the beloved battle angel. While I would have liked more diverse customisation for her face and hands, this is undeniably an excellent product, and a must have for fans of the character.

This photoshoot used a pretty bog-standard set up, with three white lamps and a white card backdrop. Two lamps lit the figure, while the third mostly helped to light the backdrop up. Due to the difference in colour temperature between the different white bulbs, there’s a purple/pink hue to the background which is produced by the camera. While it’s often preferable to have your whites match up to avoid this, you can actually get pretty interesting effects from a mismatch. It’s something to keep in mind if you’re shooting with white lights! I also used a more effective diffuser this time, in order to soften a distracting hard shadow that was caused by her hanging fringe.

This was my first time shooting a Nendoroid – it can be challenging to effectively frame something so small, but coming up with poses was fun! I’m looking forward to getting more Nendoroids to play mix and match with in the future!