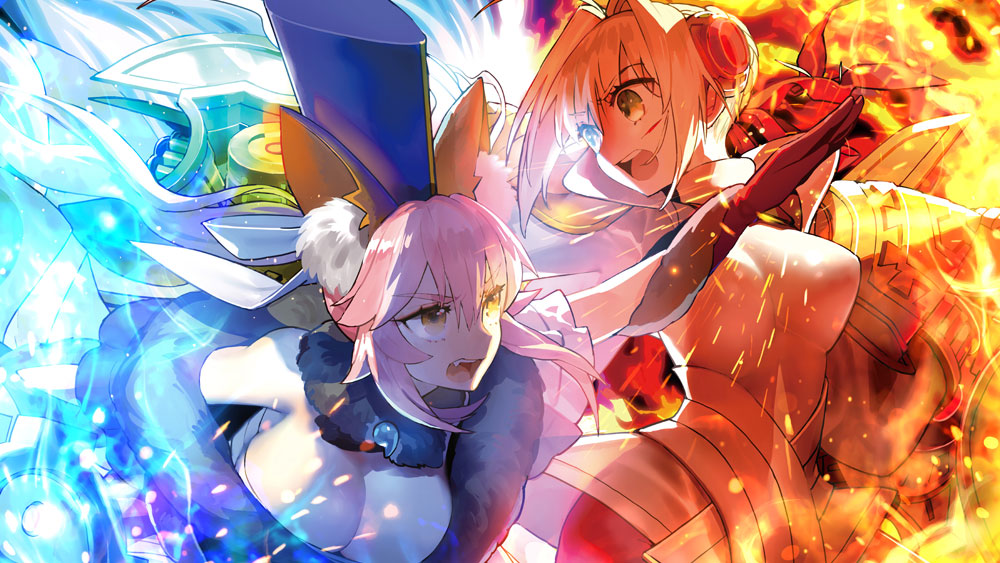 If you’ve been to Waifu Watch before, then you might recall that we’ve looked at Fate/Extella in the past. Marvelous have released the game on the PC since then, and as a big fan of the game, I decided it was worth taking another look at.

Since the games are identical in terms of their gameplay and content, I’ll be focusing on how well the PC port holds up. As a result, the review will be quite brief. If you’re after a more general look at the game itself, then take a look at our review for the PS4 version. I really quite liked it, and I’d certainly recommend it to fans of Fate or fans of Musou style games. That said, let’s get right to it.

PC ports can have a tendency to be hit or miss – a lazy port can spoil even the best of games. However, Marvelous seem to have a track record of good PC ports, and this one certainly follows suit – I’m pleased to say that Fate/Extella’s port is very good indeed. The game boasts full controller support, including button graphics for the DualShock 4 controller and 360 gamepad. It comes with a rather standard selection of configuration options, allowing the user to tailor the game to their own specifications. While the options aren’t the most in depth, they do provide the essentials, such as an anti-alias toggle, a choice of texture resolutions and so on.

Despite my fairly dated hardware, I was able to run the game comfortably at a consistent 60FPS using the ‘Standard’ preset. The frame-rate remained rock-solid throughout my play time. It was stable during combat with Extella’s large hordes of enemies, and continued to hold steady during the game’s bombastic Noble Phantasm animations. Whilst lowering the settings meant that the game wasn’t quite as pretty as the PS4 version, the difference wasn’t too noticable thanks to the game’s art-style. It’s a pleasing game to look at, even with the graphics turned down a little.

During my play time, I didn’t encounter any bugs or issues – everything worked as intended, which is more than can be said for a lot of less fortunate ports. As you might expect, the Steam version includes achievements and trading cards to collect. The achievements, of course, match up with other versions of the game.

Otherwise, as noted before, Fate/Extella is identical to the PS4 version in both its content and gameplay. Playing the game on my computer feels almost exactly the same as playing the PS4 version, minus the slight drop in graphical fidelity. If your hardware is up to snuff, the experience will probably be almost indistinguishable. In my eyes, this is both a good thing and a bad thing.

On the bright side, this means that players can choose their preferred platform and receive the same game. There’s no pressing need to double dip if you already own the PS4 version, though Vita players might appreciate the upgrade in performance. If you were worried about potential exclusive content, then rest assured that you aren’t missing out on anything new.

However, I was very disappointed to discover that the game’s large collection of DLC costumes is not included with this release of the game. The costumes are available to buy at launch, however, and the whole set adds up to round the same price that the game itself costs. While this might come across like a greedy complaint, I feel like that’s a bit of a steep cost, especially when compared to the Nintendo Switch version. The Switch version includes all of the costume DLC – plus an exclusive bonus costume – for no additional cost. It felt like PS4 and Vita players were getting a raw deal when the Switch version was announced not even half a year after launch, but for the Steam release – which came out just a few days after the Switch version – it stings just that little bit more.

Ultimately, Fate/Extella is a great port of a great game, but it’s a game that’s been out for some time now. As a new release on Steam, it’s being sold at a full £39.99 price, and I would have liked to see the additional DLC content included in that price. Unfortunately, the DLC remains separate, and it costs a pretty penny too. As it stands, the Nintendo Switch version offers the most content out of the box – providing it performs well, it would certainly be the best value for money.

But, If you haven’t played the game before and the DLC doesn’t bother you, the PC version is a perfectly good way to play Fate/Extella for the first time. And I have to admit, it’s quite thrilling to see an officially translated Fate game on my PC. I’m looking forward to more in the future.

The PC port of Fate/Extella has done an excellent job of translating the game to a new platform. It runs well, even on my dated hardware, and contains all of the content that the PlayStation 4 and Vita versions had to offer. However, it fails to do what the Nintendo Switch version does in offering a complete, definitive package – if you want the DLC costumes, you’ll have to pay for them separately.

In short, for those who’ve played the game before, there’s no need to buy the PC version, but for new players the PC version is a great way to experience the game.