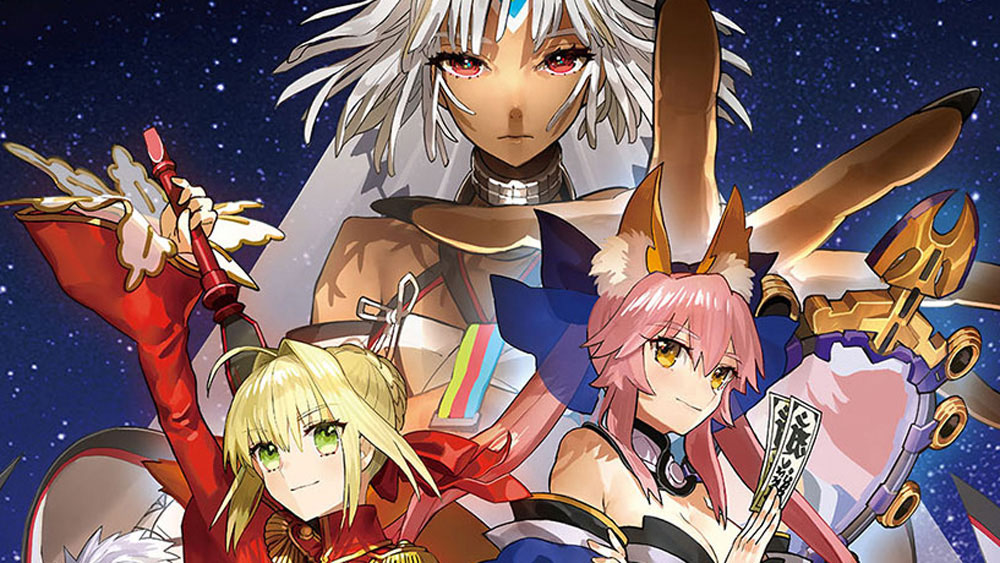 [You can find a review for the game’s Moon Crux collector’s edition by clicking here.]

So, what is Fate/Extella: The Umbral Star? Well, it’s a Dynasty Warriors-style action game (known as “Musou” games) that follows on where Fate/Extra and Fate/Extra CCC left off. Fate/Extra and it’s sequel CCC are PSP exclusive RPGs – spin offs from the main Fate series – the latter of which never released outside of Japan, and the former of which was sadly unsuccessful in the West.

It might seem like an odd entry point for newcomers to the series, but fret not, as Fate/Extella: The Umbral Star is certainly playable without the context of previous games.

The Fate series is known for its strong stories, and Fate/Extella continues the trend. The story is written by TYPE-MOON’s lead writer, Kinoko Nasu, and is told in a format that I’d describe as “visual novel lite” – lots of text and plenty of dialogue. The player is given several choices throughout the game, but unlike full visual novels, these choices don’t have much impact.

Every line of dialogue (aside from the protagonist, who can be male or female) is voiced, and voiced very well – the performances lend the cast plenty of personality. Sadly, fans of dubs will find themselves disappointed, as only the original Japanese audio track is available.

Story mode features three primary routes, and a final “true” route that wraps up the plot neatly. Each primary route can take up to 4 or 5 hours to clear, which is a comfortable length and keeps things from dragging. There are also brief side chapters available for each of the remaining Servants, though most of these provide little more than fluff, and last only a few stages each.

To summarise: through the events of Extra and CCC, you’ve proven yourself the victor of the Moon’s Holy Grail War. You and your Servant have earned the power of the Regalia, and assumed the right to rule the digital world “SE.RA.PH”, located in a super-computer known as the Moon Cell Automaton.

However, you soon find yourself embroiled in a turf war, battling against an opponent who is not just identical to you, but is also armed with their own Regalia – and thus their own claim to the throne. Looks like there’s a mystery to solve, gang!

Beyond all this, a greater threat looms in the distance. It’s not long before it arrives in force – and it’s up to you to find a way to save not only SE.RA.PH, but all of humanity, too.

There are twists and turns along the way, of course, and while there’s nothing groundbreaking about it, the story does its best to keep you intrigued and invested throughout. As you’d expect, the three main Servants – Nero Claudius, Tamamo no Mae and Altera – are the stars of the show. Altera in particular has a compelling arc to uncover, and quickly grew to be one of my favourite Fate characters over the course of the game.

That said, the writing can lean a bit too much upon fanservice at times. While that doesn’t normally bother me, I can see how it might get on some player’s nerves, especially newcomers. Nero Claudius and Tamamo no Mae can be especially gooey and clingy toward the protagonist, and at times it gets overbearing. If you lack the prior attachment, it can all feel a bit forced, and – dare I say – it panders a bit too much to the “waifu” demographic.

I’ve also seen some critique of the localisation in regards to finer details, although I personally didn’t notice anything that stood out as weird. Your mileage may vary depending how intimate you are with the series and its lore, but for most players it’s probably nothing to worry about.

So, what about the gameplay? Well, if you’re familiar with Musou games, then you’ll find it easy to adapt to Fate/Extella, as it shares more or less the same blueprint. You control a powerful Servant and charge around a large map, cleaving through thousands of faceless mooks and conquering the enemy’s territory, all whilst being sure to defend your own turf along the way. Capture enough, and you win – surrender enough, and you lose.

Combat is the game’s meat and potatoes, and it’s done well. Attacks are flashy and gratifying, with combos growing more elaborate as you progress, letting you eliminate enemies with ever more dazzling displays of power. Battles against tougher foes – elite mooks and enemy Servants – can be a bit annoying though, as they aren’t easily staggered and tend to cut right through your offense with their own. These are best tackled by the game’s various special moves, including each Servant’s unique Noble Phantasms, Extella Maneuvers and the powerful (but temporary) Moon Crux transformations.

Occasionally different objectives (such as capturing particular zones, or attacking specific opponents) and one-on-one boss fights will mix things up a little bit, which helps stop things from getting too monotonous. It can still feel a bit mindless and repetitive after a while, but it can also be very satisfying and empowering – it’s a great game to play if you need to unwind and you don’t want to think too hard.

Characters level up as you progress, and there are other light RPG elements in the form of equippable buffs and bonuses. The Code Cast system allows players to find blueprints to craft and equip a set of spells, enabling them to cast buffs, cures and wards during battle. These features add just a touch of depth to the game – not enough to make a huge impact, but they’re certainly a welcome addition.

Graphically, the game looks good. The interface is appealing and effective, and Wada Arco’s illustrations, which appear throughout the game, are gorgeous. But there is something a little bit off about the 3D side of things – character models are vibrant and colourful, but could stand to be more detailed and less flat, especially on the console versions. Environments are unique and interesting, with fans of the series sure to be pleased by familiar details and locations, but some spots can be barren and at times difficult to navigate. But this probably contributes to the game’s stable performance – in my playtime, the frame rate stayed smooth throughout, even with huge swarms of opponents on screen and large, flashy effects popping off with every swing of a sword.

In terms of extras, there’s also Free Battle mode, letting you use the game’s 16 unique characters on any stage that you’ve beaten in Story mode. By completing side-objectives on each stage, you can raise each Servant’s bond level and eventually unlock alternative outfits for them. There’s also an extensive gallery, where you can listen to the game’s music and review any of the cutscenes and illustrations that show up throughout the game, and a glossary that details lore for the servants and setting.

Overall, Fate/Extella: The Umbral Star is a solid package, with plenty of content and a lot of fun to be had – but it certainly isn’t for everyone. It suffers from a lack of replayability, as the story is strictly linear, and there isn’t much reason to replay stages again and again as different Servants after you’ve tried each one, unless you want to kill time.

Straying from the RPG roots of previous entries might not be to every Fate fan’s taste, but the game is not too hard, and players who just want the story should be able to work their way through it on Easy mode. The gameplay emulates the Musou style well enough that if you’re into that kind of game, it’s worth checking out, even if you’re unfamiliar with the series. It’s still easy to follow along with the game’s story and characters, so it might just make a nice entry-point for the curious customer.

Fate/Extella is a great musou-style action game. Fans of the Fate franchise will enjoy the story and characters, but there’s plenty for non-fans to enjoy too, making it a comfortable entry point for the franchise.