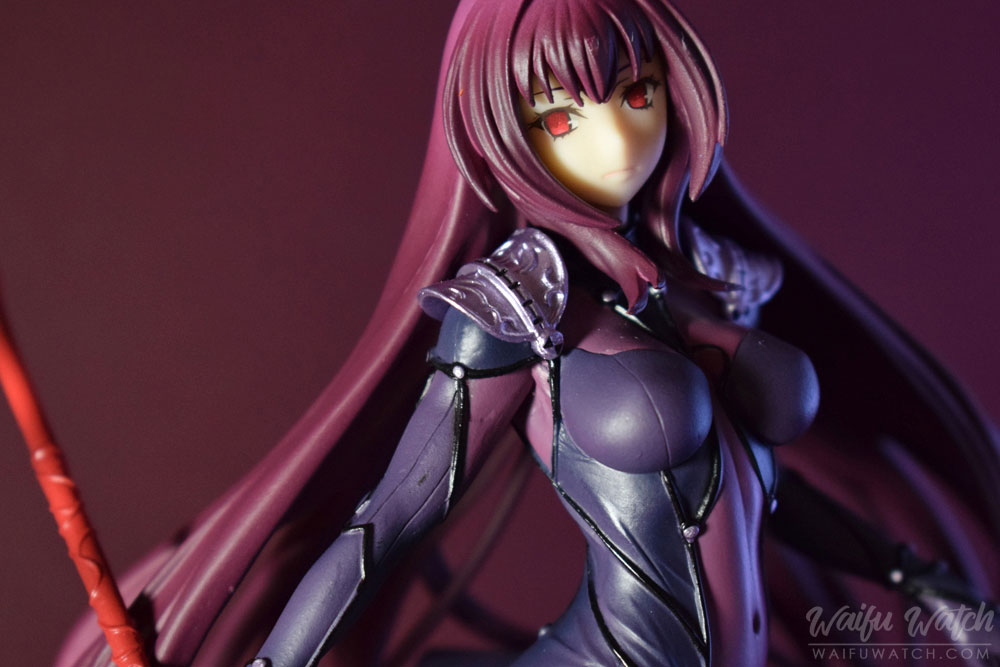 As one of the new and original designs appearing in Fate/Grand Order, Scáthach’s popularity exploded thanks to her strong look and her cool, sharp personality, as well as her connection to the also popular Cú Chulainn. She is a warrior-queen from the Ulster Cycle of mythology, and perhaps one of the most powerful Servants to appear in the series. She is portrayed here in her second ascension outfit, striking a pose based on her card art from the game.

Produced by FuRyu, this version of Scáthach is a prize figure. This means you can probably pick her up at a fairly low price – my own only cost  ¥1800 before adding shipping and other costs. Personally, I’m quite a fan of prize figures, since a good prize figure can be a great option for those on a tight budget. Collecting figurines can be expensive!

First impressions of the figurine are fairly positive – she does look good. Her pose is quite accurate to the source art, even capturing her cold, disinterested expression. The sculpt is pretty good, and the splayed hair and fluttering clothes add an element of dynamism to what could have been a rather blasé pose. However, her paint work is quite plain, especially on her face.

She stands around 7″ tall on a plain circular stand. She’s a nice size, being on the larger end of the scale compared to other prize figures that I own. I’m not a fan of the stand, though – while it is nice and compact in its radius, it’s unusually thick in terms of depth. It’s not much of a problem, it just looks a bit weird. Also, the length of her Gáe Bolg spear could be a nuisance, since it extends far past the edge of her stand and is a bit fragile.

Scáthach arrives in a nice, simple box. It’s nothing flashy, but it has a good, clear picture of the figurine right on the front. As you can see, there’s a TYPE-MOON sticker on the back that might help with authenticity checks.

Inside the box, things are packed nicely – Scáthach is a single piece, while her spear and stand are in two pieces each. As you can see, she stands on one foot – there’s a support arm for her leg included, probably to help prevent potential leaning issues. It’s a bit ugly, but it’s usually hidden by her other leg at most angles.

Assembly is very simple, and all of the pieces fit together easily. If you somehow aren’t sure what to do, there are instructions included to illustrate the assembly of her spear – I would advise being gentle with it, since I’ve snapped this sort of piece by forcing it in the past.

Inspecting the figurine more closely, you’ll find a nice sculpt here. Scáthach’s body is attractive, with long, shapely legs, perky breasts and a cute tummy. Her clothes have come out quite well, with the various lines that decorate her outfit being sculpted sharply. The decorations on her armoured boots and pauldrons are quite crisp, too. Her hair has good definition as well, with many individual strands that flow this way and that.

However, the quality drawbacks of a low-cost figurine are noticable on this piece. There are various production marks here and there – dents and gouges and that sort of thing can be spotted in a few places. There’s relatively few seams (aside from the intentional ones on her tight outfit), but you can spot a couple if you look, particularly on her hands and her hair. That said, these issues aren’t too noticable from the normal viewing distance.

The area that I feel lets this figurine down is the paint-work. The paint job is very basic, and while it is functional, it’s a bit bland. The finish in particular makes the figurine look plasticky in places, at least under regular lighting. I noticed this especially where her clothes scrunch up around her hip. The result is that it tends to look a bit cheap. Granted, it is cheap – but a bit of extra care to hide that would have been nice. The use of metallic paints for the pauldrons, boots and buttons is appreciated, however.

As well as the finish being iffy, her face appears to have had very little done to it besides placing the decals for her eyes, which makes it look somewhat unfinished – it sort of sticks out at a glance. Without careful lighting, her face comes out looking a bit flat and lifeless (which isn’t helped by her bored expression). You’re probably not going to have photo-shoot quality lighting available at all times, so it is slightly concerning.

On the bright side, the paint job is reasonably neat – there’s a lot of black lines and small silver buttons that could have been a potential disaster, but thankfully there’s very little paint that isn’t where it should be. As you might expect, there are some mishaps to spot if you look for them, but in general, these aren’t that noticable, especially when it’s black on dark purple.

Overall, FuRyu’s rendition of Scáthach is pretty good. I rather like her, and I didn’t have to spend much to get her, either. She has some notable flaws, but arguably you could overlook most of them. If you’re looking for a low price Scáthach figurine, this isn’t a bad choice to grab by any means.

That said, Scáthach is a very popular character, and there’s already several versions of her either in production or already released. If you’re a patient fan, or you’re looking for the best version Scáthach, I’d suggest keeping an eye out for other options.

FuRyu’s rendition of Scáthach is very good indeed, though she’s let down by a basic paint-job and an ugly stand.
As a prize figure, she makes an excellent budget purchase, but with better Scathachs out there and more sure to come, discerning collectors might want to consider other options.