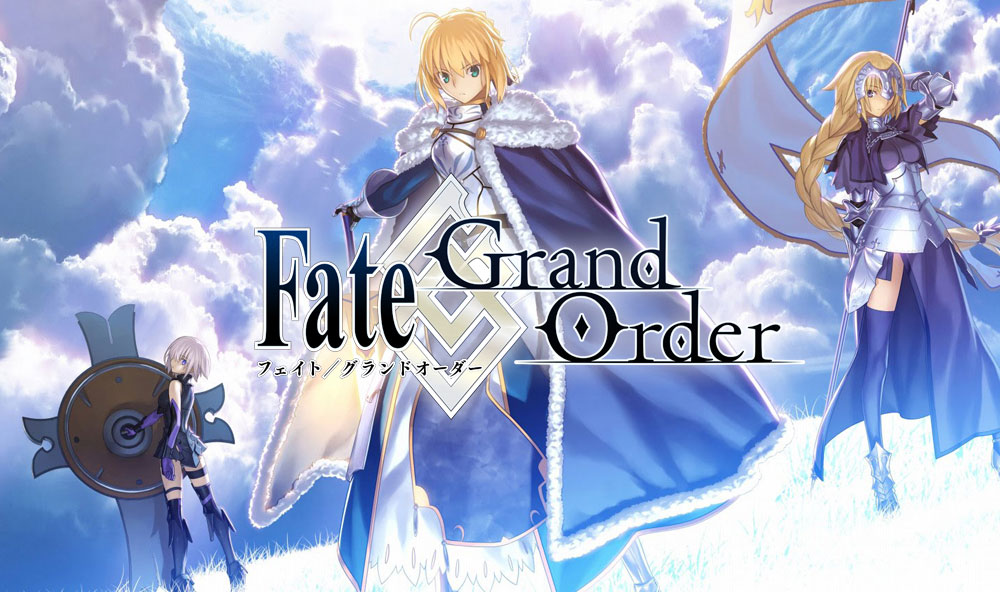 Note: This review is based on my experience with the Japanese version of the game. The US version will be more or less the same on a mechanical level, but will be about two years behind in terms of content. In other words, this review is applicable to all versions of the game.

After playing a small amount of the US version, I can say that the game runs just as well as the Japanese version. The translation, while a bit rigid and littered with the odd typo or unusual choice of wording, is servicable. You’ll be able to understand the interface and follow the story well enough.

Fate/Grand Order is a game for mobile devices, and another branch of the expansive Fate universe created by TYPE-MOON. It brings both fresh, original characters and classic, beloved fan-favourites to a new and original story told across several chapters.

The game has enjoyed significant success in Japan since its release, making plenty of money and spawning a variety of adaptations (including anime, drama CDs, ‘tutorial’ comics and even a stage play), along with oodles of merchandise, figurines and collectibles (some of which might just show up on Waifu Watch). It has since been released in China, where it’s enjoyed similar success, and now it stands poised to tackle a US audience.

But is the game actually any good, or is it simply being buoyed by a popular license?

The game begins with a prologue that settles the player in to the world of Fate/Grand Order. Players assume the role of a young magus stationed at the Chaldea Security Organisation, which monitors the future of the Earth and ensures the survival of humanity. After a bit of a disaster, the player finds themselves thrust into the role of a Master – a commander of familiars known as Servants. They must summon these Servants – heroes from all across time, myth and legend – and travel back in time to various singularities, correcting the anomalies that have appeared and, in doing so, preventing the eventual extinction of the human race.

It’s quite a grand story, and though it starts out simple enough, it builds to a crescendo as things go on, becoming an epic affair by the time the final singularity arrives. New chapters are released periodically, creating a steady content flow. Compared to other mobile games, the story is very detailed and rich, and there’s plenty of it to enjoy – even before considering the many side stories and events. Story scenes are presented in a visual novel style, with minor dialogue choices included. If you find things getting longwided, there’s a handy skip button that allows you to jump right to the action, and should you want to revist them, every story scene is archived for you to view again later.

The story is broken up throughout by a number of battles. These battles make up the bulk of the gameplay, and take the form of a turn-based RPG. Players field parties of up to six Servants. Three of these Servants take the field at any time, with fallen Servants being replaced by the next in line. Each Servant is assigned to a class (such as Saber, Lancer or Archer), and each class has an advantage over another.  Each turn, the player may activate a variety of skills, before selecting three cards to attack with and watching combat unfold.

At a surface level, the game is mechanically simple – you can get through most of the early content simply by attacking. However, there’s a bit of depth there for those who wish to explore it. The three types of cards have their own effects; creating different chains with your cards will have different effects as well. For example, selecting three Arts cards will create an Arts Chain, charging 20% of the Noble Phantasm gauge for any Servant involved in the chain. Selecting three cards from the same Servant will create a Brave Chain, allowing that Servant to perform a fourth ‘Extra’ attack for bonus damage. This is before you even start getting into things like card-counting, critical stars and, of course, team-composition, buffs, debuffs and so on. Even then, there are further statistics to consider, should the player choose to explore them.

There are several modes to partake in: Story mode allows players to explore each singularity and experience the story. Interludes are short side-stories which focus on a single Servant. Events are more elaborate side-stories, often with more challgenging battles, which offer rewards in exchange for materials. These provide a significant time and stamina sink to players who wish to fully complete them. There are also various daily missions to gather materials and currency to improve your Servants.

All of this is governed by a stamina system that limits your play-time, but the game is pretty generous with giving out items to resupply your stamina and keep on playing. This is especially useful during events, which can be quite grindy if you choose to empty out the event shop.

Collecting Servants and raising them is made more enjoyable by the broad variety of characters to choose from. Almost all of them are (loosely) based on heroes and villains from myth and legend, such as King Arthur and Gilgamesh, or real life figures such as Thomas Edison and the Dread Otaku Blackbeard. Many of these characters are original to Fate/Grand Order, but fans of other Fate titles will find plenty of familiar faces as well, along with some fresh variations on old favourites.

The characters are brought to life by detailed profiles (which unlock piece by piece as you use them in battle) and illustrations from a broad variety of excellent artists – famous names like Takeuchi Takeshi, Wada Arco, Ishida Akira, Honjou Raita, Komatsuzaki Rui, and many more are included. Craft Essences also feature gorgeous illustrations and their own brief descriptions, making even those with lacklustre effects a delight to collect and admire.

Indeed, the production values are very impressive all around – the voice cast features a number of prominent names too (if you’ve seen much anime, then you’re sure to recognise at least a few of them) and the game’s soundtrack and graphics are excellent. Battle animations are full of flash and vigour (at least after you’ve set them to 2x speed, as the normal speed is glacial) as Servants dash, leap and fight in their own unique ways. Noble Phantasms are especially impressive, although it would be nice if you could skip them, as you may see them several times over in longer battles.

The game is, in short, an audio-visual treat – although fans of dubs will be left wanting, as there are no plans to include English voice acting. It should also be noted that the game can be quite system intensive. Naturally, your performance will vary depending on your hardware, but a handful of stages and animations can cause even more powerful systems to slow down. In general, though, the game runs well.

Behind all of the audio-visual delights, though, lurks the rather ugly gacha system.  To be frank, the rates are absymal – with only a 1% chance of summoning an SSR Servant, many players might find their favourites are hard to get. Many of these SSR Servants are also limited to special events, encouraging players to spend their Quartz (the game’s micro-currency) or miss out until they return – if they return, in the case of characters like Brynhildr. Even SR Servants can be difficult to come by – especially the story-locked characters, who are tucked aside in a gacha pool usually ignored for more desirable and limited prizes.

And, unlike many games of its kind, there are no pity prizes and very few guarantees – only one card of SR rarity is guaranteed per multi-summon, and it’s more likely to be a Craft Essence than a Servant. To make things more stingy, the game’s very few guaranteed SSR summon events feature a reduced pool of Servants (excluding most of the game’s limited characters, which comprise around half of the SSR roster at the time of writing) and require the use of Quartz that has been paid for with real money.

Despite the rather cruel gacha, though, the game is actually quite free-to-play friendly. Most Servants are viable in one way or another – for example, some of the game’s best support characters (such as Hans Christian Andersen or Shakespeare) are found at the lowest rarities. Systems like Palingenesis and Fou cards also allow players to improve their favourites by increasing their level cap and overall stats, and weaker Servants occasionally receive buffs to their kit via Strengthening Quests. As well as this, the game’s Events occasionally include SR characters to earn and unlock, some of which are among the strongest in the game.

There are also no player-vs-player elements to worry about – the game is strictly single player, with some very light cooperative elements in the form of Raid Bosses and a friend system. While there are certainly some characters that perform better than others, there’s no serious pressure to use characters that you don’t like simply because they’re more competitive. This frees up team-building quite nicely, and while it can be preferable to stack your team with types that have a class advantage, a carefully built party can win most fights regardless. In other words, if you’d like to take your waifu into every battle, you can.

Fate/Grand Order is, primarily, a game for Fate fans. If you enjoy the characters and the lore of the Fate series – be it the original Fate/Stay Night, or spin-offs such as Fate/Extra or Fate/Apocrypha – then there’s plenty here for you. But, even if you’re not a Fate fan, the game still has enough to offer that it might just make a fan out of you. I would hesitate to call this a great mobile game, but rather a great game that happens to be on mobile platforms.

Perhaps the best way I can put it is like this: I’ve been playing the Japanese version of this game since it came out in 2015, and still play it every day. Now, the US version is out, in a language I can read – and I’m looking forward to enjoying it all over again.

Fate/Grand Order is not just a great mobile game, but a great game that happens to be on mobile platforms. It looks great, sounds great, and the story is richer than most.

However, the stingy gacha really limits the fun, and can be frustrating for free-to-play players.