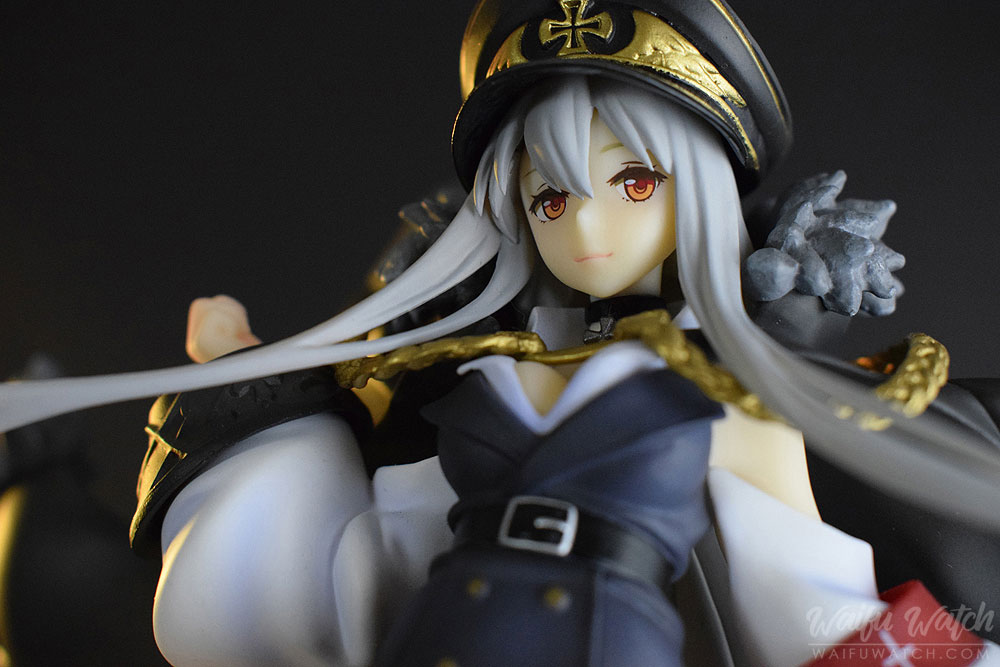 GIRLS’ FRONTLINE is like Kantai Collection (or KanColle) with personified guns instead of personified ships. It’s a Chinese mobile game (developed by MICA Team and SUNBORN Network Technology, published by DIGITALSKY), so you can make all the knock-off jokes you like, but there’s a lot of obvious quality in the game’s production. I haven’t played the game myself, but I have found myself taken with its art and character designs.

The subject of today’s review, Mauser Kar98K, is one of the collectible characters available in the game. If you’re at all familiar with guns, or have played any of the hundreds of games set in World War 2, you’re probably familiar with the gun she personifies. It was the staple service rifle for the German Wehrmacht during World War 2, which has clearly inspired her design, particularly the inclusion of the Iron Cross on her hat and choker.

Manufactured by HOBBYMAX and distributed by Good Smile Company, this 1/8th scale rendition of Mauser is based on her in-game character art (drawn by Samail). It’s a very accurate rendition, with a few liberties taken to adjust her expression and the placement of her hand. Her coat has been made more dynamic as well, which is nice. The result is a high quality figure that’s very striking on its first impression, and continues to impress upon closer inspection. Although she’s rich in detail and expertly sculpted, she’s definitely more interesting to look at from the front. It’s not surprising that her best angle is the one she was drawn in.

Mauser arrives in a classy black and silver box decorated with her official art, photos of the figure and tasteful typography. The box features a door which opens to reveal the figure behind a plastic panel, which lifts out to grant access. Inside the box you’ll find the figure and her various parts, as well as a numbered certificate of authenticity and assembly instructions. The instructions are notably available in English, although as you’d probably guess, the English is a bit broken.

The presentation is excellent overall, projecting an impression of quality. It’s not all looks, either – the box uses thick card that feels durable, and Mauser is held perfectly secure inside. It’s quite a large box, though – certainly one of the largest among the figures I currently own. It’s reasonably heavy, as well. Bear in mind that this might have an impact on your shipping costs, should you choose to buy her.

The figure comes in several pieces. First you have Mauser herself, who is a single piece. Alongside her is the gun she represents, the Mauser Kar98K, and a carry-strap for the gun. Finally, there’s the stand, which is made up of a simple black disc and a metal pole.

To be honest, assembling this figure is a bit frustrating. It looks simple enough, but looks are deceptive at times. The first issue was the gun’s carry-strap, which attaches to the gun with two small hooks. I found that these hooks were prone to falling out if the strap was jostled too much, but they felt much too fragile to really press them into the holes. It’s a small nuisance, but worth mentioning.

The gun itself gave me a lot of trouble as well. It attaches to Mauser by a peg on the gun’s stock, as well as a longer peg on the top of the gun. The stock attaches to a hole in the back of her calf, while the peg on top fits into a hole in her palm. Well, that’s the idea. In reality, I found that I couldn’t get the peg to fit the hole in her calf, and even if I could, the peg for her hand was out of position. The same was true in reverse – the gun was simply too long. In the end, I managed to put it together properly, but it was a troubling experience.

First, I had to attach the gun to her hand. Once the peg was in her hand, I had to push the gun firmly, moving her arm until I was able to get the second peg into line with her calf. Then, after a bit of wiggling to get it into the hole (during which the gun strap fell off, of course), everything was securely in place. I’m not really a fan of any assembly that needs me to push against the figure with force – that tends to be how things get broken.

Putting Mauser on her stand is harrowing too. To achieve the floating effect, Mauser balances on a sturdy metal pole which sits comfortably in a plastic base. The difficulty here is finding the hole that the pole is meant to fit into, and then making sure that the pole gets into it properly. The hole is hidden beneath her hair at an angle that’s hard to get a good look at. On top of that, you have to thread the pole between her hair to get the right angle. It’s trickier than it really looks – you can get the figure to balance on the pole without actually getting it into the hole, but she’ll be sat at a funny angle. The pole doesn’t feel terribly secure either, even when you’ve put it in properly. At one point I found that I had to hold the base while moving her, because it would just fall out if I didn’t. She’s more or less held onto it by gravity.

For all the issues, the stand doesn’t even look very good. It’s a bland, flavourless disc of black plastic, and I feel like the pole is an inch or two longer than it really needs to be. She would ‘float’ just as well on a shorter pole, and I’d be less worried about her wobbling around on top of it. So far as I’m concerned, the stand is the weakest part of the whole package, but it does do its job at the end of the day.

Mauser’s sculpt-work is high quality stuff. This figure features plenty of detail, and it’s all been lovingly crafted – from her long, swaying hair to the intricate patterns on her boots and the hem of her skirt. These details are very crisp and clean, and they make Mauser a delight to look at from head to toe. There are some parts that are weaker than others – one example is the collar of her blouse, which is blobbier than I’d have liked. The fur on her coat is a bit lumpy too, although it does achieve a good enough effect. Her attractive uniform is well modelled otherwise, with the fluttering coat sleeves being a standout. It all has a weight and thickness to it that’s very pleasing.

You can also say this about Mauser’s thighs, which peek out between her boots and her skirt (which itself barely conceals her panties). What you can see of her body is carefully sculpted too, with her delicate hands and handsome face turning out great. Her eponymous weapon, which has been 3D sculpted for this piece, looks great as well. This excellent recreation of the recognisable rifle really does complete the figure. It’s crisp, clean details compliment Mauser especially well. All in all, a very impressive effort.

Unfortunately, Mauser’s coat and hat are not removable. It’s not really a deal-breaker, since they add a lot to her design. But It would have been a nice feature, particularly if it could make the assembly a bit simpler.

The strong sculpt is tied together with equally strong paintwork. The shading on her uniform is excellent. The way her sleeves and boots are shaded adds a lot of dimension and appeal to the figure by bringing the folds and creases out nicely. All of the paint is applied neatly, and I haven’t spotted any issues or stray paint. The solid paintwork continues to her gun, too, which looks smooth as silk – honestly, it would be nice enough to display on its own.

The variety of finishes used make this a visually diverse piece, too. Mauser’s hat has an appropriately glossy peak, and her boots use a high gloss finish that make them really shine. The corsets around her boots are matte, and the various gold details have a metallic finish that makes them stand out. As well as all this, Mauser’s hair is fully shaded and becomes translucent towards the tips of each strand, allowing light to pass through. It’s a lovely touch that can create some very appealing effects.

I’m a bit bemused by the shade of light grey chosen for her hair in the final version, though. Both the official art and the various product shots depict a much brighter shade of white. Again, it’s not a deal breaker, but it’s a curious choice, and I think the snowy look suits her better.

Mauser really is a wonderful figure overall. She’s beautifully crafted and has a gorgeous design, so she’ll definitely stand out in anyone’s collection. I can’t help but be impressed every time I look at her. She does have a few very small issues, but they’re nitpicks more than anything else. While her assembly is a bit frustrating, it’s not something you’re likely to do more than a few times, so it isn’t a big deal. And it’s very rare that you get a figure whose box looks so good that you wouldn’t mind displaying that, too. HOBBYMAX have created a high quality package from top-to-bottom.

There is one thing that really hurts her, though. Mauser’s stand is boring to look at, and it’s impractical to boot. While it does hold her up, I can’t help but think they could have come up with something better. As well as that, Mauser is quite a big figure when she’s fully assembled, so the space conscious might want to consider this one very carefully.

But at the end of the day, I really recommend checking this one out. GIRLS’ FRONTLINE may not be as well known as KanColle, but with strong designs like this one, I think it could produce just as many gorgeous figures. They’ve already made a very strong start with Mauser Kar98K, and I hope to see many more like her.

Mauser Kar98K is a gorgeous figurine with only a few quibbles to mention. She’s very nearly worth a perfect score, but her frustrating assembly and the boring and impractical stand hold her back just that little bit. Still, she’s absolutely worth a look, as she’s sure to be a standout piece in anyone’s collection.