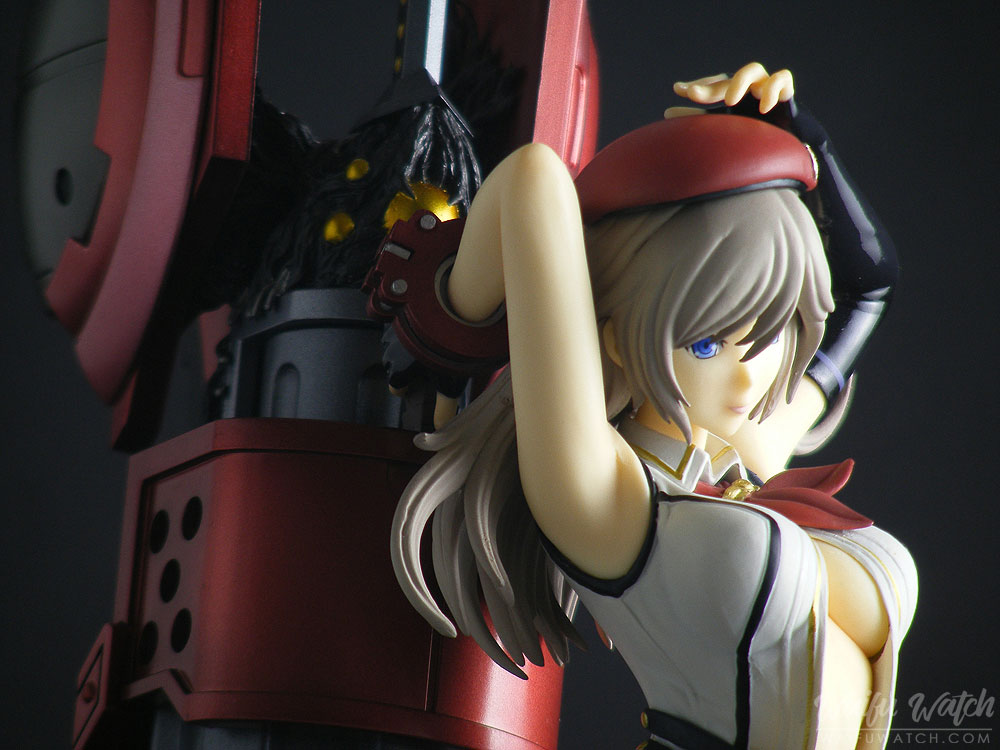 Following an initial release in 2014, PLUM’s rendition of God Eater 2′s Alisa Ilinichina Amiella saw a lot of justified criticism, particularly centred around her skin tone, sloppy paint-work and poor facial detailing. This year’s re-release has been re-tooled as well, aiming to fix those complaints.

Since this is my first time with the figurine, I’ll be giving her a full review, head to toe. Let’s get right to it!

At a glance, Alisa is striking and imposing – she’s guaranteed to stand out. She has an attractive body line and a provocative-but-tasteful pose. She also comes with her impressive God Arc (or God Machine in Japan). It’s fully detailed and looks awesome, even if it doesn’t make much functional sense. The God Arc is one of this figurine’s biggest selling points – without it, the figurine could run the risk of looking generic.

With the help of her big gun, Alisa stand about 11″ tall overall. Both the God Arc and Alisa fit on a basic circular stand, and mostly avoid escaping its perimeter.  This means she doesn’t fill up too much shelf-space, which is always a concern with bulkier pieces like this one.

Alisa arrives in a box just under 13″ tall, which makes it pretty big. It’s worth considering, since the large box and extra weight of the God Arc are likely to bump up her shipping costs. The box feels sturdy and secure, and it’s easy to get into as well. So far as I can tell, the box hasn’t changed much since the original release.

Inside the box, the figurine arrives without much assembly needed – Alisa and the God Arc are each a single piece, ready to go. There’s plenty of protective plastic to remove though, including a layer beneath Alisa’s cast-off skirt, and the God Arc is braced by a length of bubble-wrap. You should also find the figurine’s stand, a clear support arm for the God Arc, and Alisa’s beret in the box, as well as assembly instructions.

What little assembly there is, though, can be tricky. The provided instructions are obviously Japanese, and the small black-and-white illustrations aren’t clear enough to be very helpful. Most of the pieces will fit into place without trouble – Alisa’s foot pegs fit snugly into the stand, as does the God Arc’s support strut once you line it up properly. Even Alisa’s beret is very easy to fit into place, thanks to the inclusion of magnets which will hold it in the right spot on her head.

The difficult part is the God Arc – specifically, fitting the God Arc onto it’s support. From what I’ve seen, a number of owners of this figurine balance the gun as best they can against the support, but this puts it at risk of toppling over from the slightest nudge.

The trick is that the support is designed to slide up underneath part of the God Arc, which will hold it in place. The catch is that the fit is quite snug, and initial attempts to push it into place did cause some frightening cracking noises. But don’t be put off – it’s definitely made to fit underneath it. For best results, ignore the instructions and attach  the support to the gun before you put it on the stand. Make sure not to force it – once you loosen the gap up a bit and find the right angle, the piece should squeeze comfortably into place.

Now, onto the figurine itself – it’s certainly an attractive piece. Alisa’s body is well sculpted, with plenty of curves to admire. Her rump has earned some notoriety, famed for how round and plump it is (the phrase “bubble butt” is not inappropriate), and her skirt is clearly designed to emphasise the point. Her exposed cleavage is nothing to sneeze at either, and her open shirt shows off her sloping stomach as well.

Alisa also sports long legs; her thighs are shapely and thick. Her raised arms expose her armpits, which I’m glad to say are sculpted with care, since a lack of attention here could have spoiled the pose. Her hands are crafted well too, with seperated fingers and defined fingernails – though it does bother me that her palm hovers noticably above her hat.

Before I come off as a massive pervert, I should speak about her face. This is where Alisa falls down a little bit, although there is an obvious improvement here over the 2014 edition. Her face just isn’t quite right; it’s as if her features are too spread out, and her cheeks are a bit chubby too.

Still, it doesn’t look too bad with the right lighting, and the addition of a subtle pink lip gloss and the effort taken to put her eyes in the right place are appreciable improvements over the original. Her hair is well sculpted with a dynamic flowing look, but there are a few spots that are blobby, particularly at the tips. There’s an obvious seam across the top of the head, too, although this is a common issue among figurines, and it’s mostly hidden by her beret anyway.

From a manufacturing standpoint, the figurine has a few noticeable flaws. Again, many of these have improved since the original release, but there are still minor issues with the paint-work. I’ve noticed the black and gold paint straying from the lines on her shirt, as well as flecks of it that have wound up in the wrong place entirely. Mine also has a black line on one of Alisa’s hands, which luckily isn’t too noticable due to its placement, but bears mentioning. There’s also a few spots where dust or lint appear to have got stuck in the paint. That said, these are issues that you have to look quite closely to find.

Most of these flaws are on her clothing, which is a shame, because her clothes are quite well done otherwise. Her shirt and skirt flutter in a way that gives the figurine a bit more dynamism, while showing off her body tastefully. Her boots have a high gloss finish that lets them catch the light, and the gold paint used for various trimmings looks good too. Her skirt’s tartan pattern is all neatly done as well, and for a removable part, it fits close to her body and hides its seams well.

Compared to other cast-off figurines, her skirt comes off easily enough, and the notches that hold it together (disguised as her skirt’s buttons) aren’t hard to push into place.  Be aware that you’re likely to get a few light paint transfers when taking it off and putting it on again. It’s a bit of a nuisance, but don’t panic – I was able to remove most of them with a common eraser, rubbing lightly but firmly on the marks.

Finally, the God Arc uses a subtle metallic paint that looks great under any lighting, particularly on the red portions – the paintwork really makes it pop, though some people might have preferred a stronger metallic effect. There are a few seams here and there, particularly on cylindrical parts, but you won’t notice them from a distance. Otherwise, the details are crisply crafted, even down to the smallest circles and lines. Honestly, you could probably display the God Arc on its own and it’d look pretty impressive.

Overall, I think this is a really great figurine. It’s certainly not perfect, with some notable manufacturing flaws and a face that’s hit-or-miss depending how you look at it, but from what I can tell, it’s a signifcant improvement over the original version.

It looks great on a shelf and stands out well from other figurines, thanks to Alisa’s attractive sculpt and the inclusion of her impressive God Arc. If you were on the fence about this figurine, or wanted to upgrade from the previous version, I’d have to recommend it.

The 2017 reissue of Alisa has fixed most of the figurine’s worst flaws, though some issues still remain. The result is a sexy and eye-catching figurine that’ll look great on any shelf she can fit on.