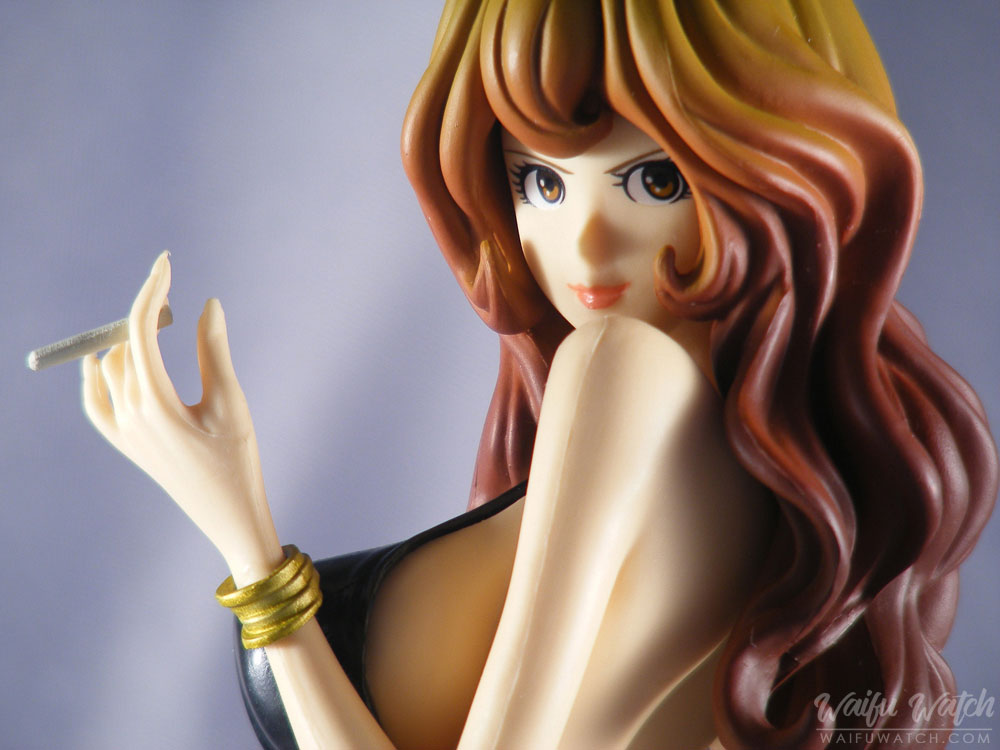 From first impressions, Mine Fujiko projects the air of the “femme fatale”. Her provocative over-the-shoulder gaze and sultry, confident smirk speak volumes. Although I know very little of Lupin III and Fujiko herself (apparently she’s named after her mountainous bosom, which is …charming), this figurine conveys a lot about the character, which I find quite impressive – it’s rare to find figurines that communicate their personality so clearly and quickly.

Standing around 9 inches tall, her sculpt is very appealing, featuring a pose and outfit which emphasise Fujiko’s lithe legs and sloping curves (and, of course, her eponymous Mt. Fujis). Her base stand is simple but functional, and though I’d like it to be a bit smaller, it’s not so big that it’s obtrusive.

Fujiko’s packaging is simple, bright and appealing and comes at a modest size, so it won’t take up too much room. Assembling her is simple, as she comes in just 3 parts (the torso and each leg) that are easily removed from their plastic bags and put together. She then pops right onto her stand without any hassle.

Although she’s a simple figurine overall, Fujiko is still quite well detailed. Her hair is contoured and curled, and her dress creases in the proper places around her body. Her lipstick has a pleasing glossy finish and catches the light well, and her bangles have a nice metallic look to them. Even Fujiko’s hands are quite detailed, sporting slim, cleanly defined fingers with long nails and a cigarette accessory for flavour. All of this contributes to making Fujiko quite the sharp looker, even from the back or the side.

If you like options, Fujiko – like other figurines under the Groovy Baby Shot banner – is available in one of three colour variants (black, green, or purple, in this case), with matching cocktail dress and high heels. Obviously, this review is based on the black version – after all, black is the colour of class.

As a prize figurine from Banpresto’s Craneking line, Mine sits toward the lower end of the price scale for figurines. My own was acquired for around all-in-all, and that’s not too shabby – I’ve certainly seen worse on offer for that price. The budget cost does, however, contribute to some very notable drawbacks.

Fujiko’s paint-job is bare-bones and a bit sloppy in spots, particularly around her shoes. Her hair features a gradient effect that can make the top of her head look green under certain lighting, and the choice to give the dress a high gloss finish often makes it look cheap and plasticky, rather than giving it the intended satin-esque effect. Whether this is made better or worse by the other colour options, I can’t say, but it is something to consider.

As well as that, there’s some very noticeable manufacturing marks all over the figurine. Prominent seams run the length of her arms and legs, and even around smaller limbs, including her fingers and thumbs. Her dress also suffers from these seams, though you might be able to forgive those (since real clothes do have seams too). You might not forgive the copyright information just beneath her right buttock, though. There’s also a few spots (particularly her fingernails) where the sculpt has little snags of excess plastic, which can be distracting.

Luckily, most of these issues are hard to spot at the usual viewing range and only become obvious once you examine her closely. Sadly, it does make her less photogenic, which is a real shame – her pose and personality have been a delight to work with, but the production issues have not.

All that said, I would still recommend this rendition of Mine Fujiko to anyone looking for an affordable purchase to pop on their shelves. She’s sexy, classy, and eye-catching, without straying too far into tasteless territory. Although she’s got some obvious flaws, it’s hard to complain too much about them when you look at the price-tag. On the other hand, those hoping to use her as a model for their next shoot might want to consider other options, as the production issues and paint-job can be a little bit hard to work with.

A nice budget figurine, but Mine Fujiko does have some very notable flaws, including a barebones paint job and some heavy production seams. Still, she’s a sexy piece that looks good from your normal viewing distance.