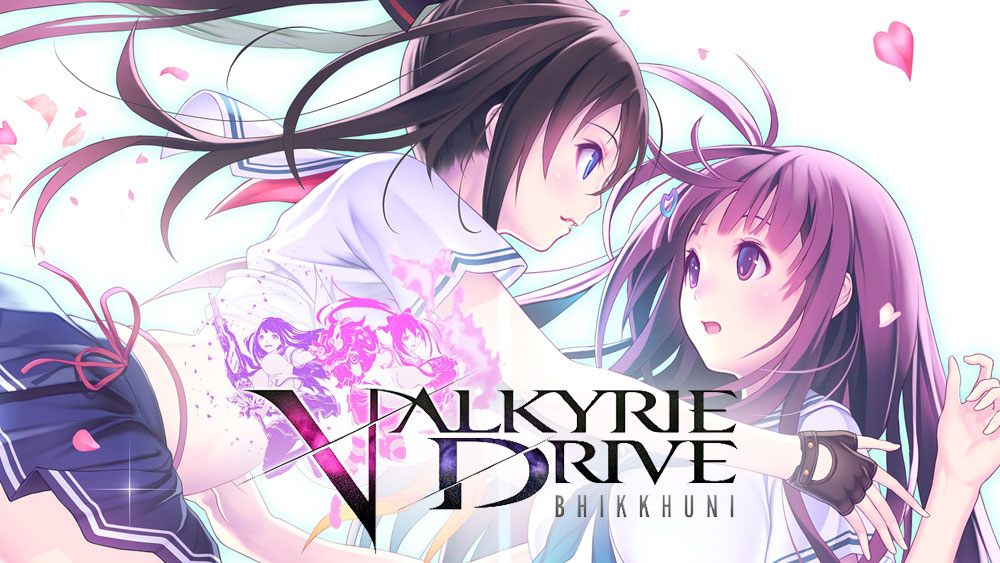 Let’s get this out of the way right now: Valkyrie Drive: Bhikkhuni is a game for perverts. If you’re not a fan of seeing cute girls grope and kiss each other to transform into huge weapons and then knock the clothes off other cute girls, then you’re probably not going to like this game.

Valkyrie Drive is a fanservice game. Indeed, this game bears a lot of similarities to one of Marvelous’ other notable franchises, Senran Kagura – right down to sharing much of its presentation. It’d be safe to say that if you like one, you might like the other. The same goes for if you don’t like it, too.

This review covers the PC remaster released recently on Steam, although the game is available on the PlayStation Vita as well. As far as remasters go, the game runs very well. I was consistently playing at 60FPS, and the remastered graphics look great. Naturally, as a remastered Vita game, it isn’t a graphical tour de force, but the colourful art-style does a lot to make the game’s aesthetic work. The game also natively supports Xbox and PlayStation 4 controllers, including the proper button graphics to boot.

Barring a few bugs (which are quickly being squashed with patches) it’s an excellent port, all in all, and is probably the version to get if you want to try the game.

Valkyrie Drive: Bhikkuni tells the story of a group of seven young women who have contracted a strange virus – known as the VR-Virus – which increases their physical capabilities and aggression, though will eventually prove fatal if a cure is not found. It also lets them transform into weapons by pairing up with a partner for a little smooch. It’s anime, of course it does.

The only way to control the virus is to pair up and do battle against other Valkyries in order to develop their understanding of their abilities and their limits. To do so, they are sent to an artificial island, Bhikkhuni, where they will be trained to face off in battle, gathering data in the hopes of finding a cure.

The premise is quite simple, and the story develops at a good pace throughout, exploring the game’s colourful cast of characters and their motivations for fighting on, before driving towards the truth behind Bhikkhuni itself. It isn’t a wholly original tale, but it’s written well enough and the character development is actually pretty good in most cases. You’re sure to find at least one girl who tickles your fancy, if nothing else.

The story is presented in a pseudo-visual novel style, driven exclusively by dialogue cutscenes. These cutscenes are fully voice acted (in Japanese only) and the acting is pretty good, too – there are some notable names involved, such as Risa Taneda and Yū Kobayashi. There are some optional bonus scenes to unlock as well, and these are also voiced, which is a nice touch.

All of this takes place over 24 missions, so the game has a decent amount of length to it. After finishing a mission, you can replay it using any combination of characters available to you, at any difficulty you like. Most missions feature collectibles and secrets to seek out, so there’s a good amount of replay value here for completionists. On top of this, Survival and Challenge modes offer extra playable content for those who want more, and there are Online multiplayer modes for those who prefer to play with each other, rather than playing with themselves.

There’s a lot of customisation to enjoy, too – the game’s main reward for gathering collectibles is to unlock new lingerie to clad the girls in. You can buy new clothes and accessories for your characters as well, and then dress them up as you please – accessories can be attached to various anchors and resized and adjusted to your liking, letting you create some unique looks.

These customisations apply globally throughout the game – that means if you blow a girl’s clothes off in your next fight with them, you’ll get to see the fancy panties you picked out for her. Unless you blow those off, too.

Gameplay follows a fairly standard action game style: players face large groups of enemies, dodging attacks and stringing together combos to take them out. The controls work well and feel quite responsive, although the lock-on can be a nuisance at times.

There are some nice nuances to the combat, too, which help the game stand out from simpler action games. Aside from the regular attacks, players are able to utilise a dedicated launcher and pursuit attack in combat. It’s easy to launch and pursue a stunned opponent, and then use a variety of Phantom techniques to extend your combos – doing so increases the attack multiplier for the duration of the combo, so players are rewarded for performing well. It’s quite satisfying when you pin together a long sequence, and then use the damage boost to wipe up the remaining mob of enemies.

There’s also the Drive system, which allows players to restore their health and increase their damage output by transforming. Each stage of Drive presents more elaborate and yuri-tastic transformation sequences, as your partner character sheds more clothes and transforms into bigger and fiercer weapons. They’re cool the first few times, but thankfully you can skip these sequences, which stops them from being a nuisance after a few viewings.

Fights against mooks are broken up by boss battles with the other playable characters, as well as the Four Pillars, who are giant mechs with several weakpoints to target and destroy. The game falls down a little during its boss fights, as stringing together combos and dodging is hindered by the more active and aggressive opponents. This can lead to slightly annoying fights, as you’re forced to chase the enemy down and get in a few jabs over and over – especially if you have to fight a long ranged opponent with someone whose range is particularly short. That said, the game never felt too difficult on the Normal setting, and there is an Easy setting too, so anyone should be able to get through it if they try.

Gameplay can be a bit repetitive at times, though. Combat evolves very little after the initial tutorials, and one of the game’s more interesting transformations is reserved till very late in the story. Several stages are repeated throughout as well, although to the game’s credit, you never follow the exact route twice and the environments are diverse, colourful and appealing to look at. There’s a decent variety of mooks, but around halfway through they simply get bulkier and change colour rather than adding new attacks or enemies to tackle.

Similarly, you’ll fight the same boss opponents a few times each, and the fights only feature very slight changes, as they add a super move or a stronger Drive to the mix. On the bright side, missions generally only last about 10 minutes at most and are broken up so that you can easily tackle the game in bite-sized pieces, preventing burnout. Action can also be broken up by spending a bit of time with your waifu of choice playing the Heart Catch mini-game.

All in all, Valkyrie Drive: Bhikkhuni knows what it is – it’s a fanservice brawler, first and foremost. It’s a game about busty, jiggly waifus who grope, cuddle and kiss each other to power up. It doesn’t aspire to be a AAA action game – it aspires to be a slice of smutty fun for people who want to see girls with big swords and tiny knickers beating each other up, and it achieves what it set out to do with gusto.

The game isn’t perfect, and it certainly won’t suit everyone’s tastes. But for what it sets out to be, it’s a lot of fun, and you get a good amount of game for a very reasonable price. In short, if you fancy playing a good fanservice action game, then you should check this one out.

Valkyrie Drive: Bhikkhuni is a fanservice game through and through. It doesn’t aspire to be more than a bit of pervy fun – and it does just that pretty well.