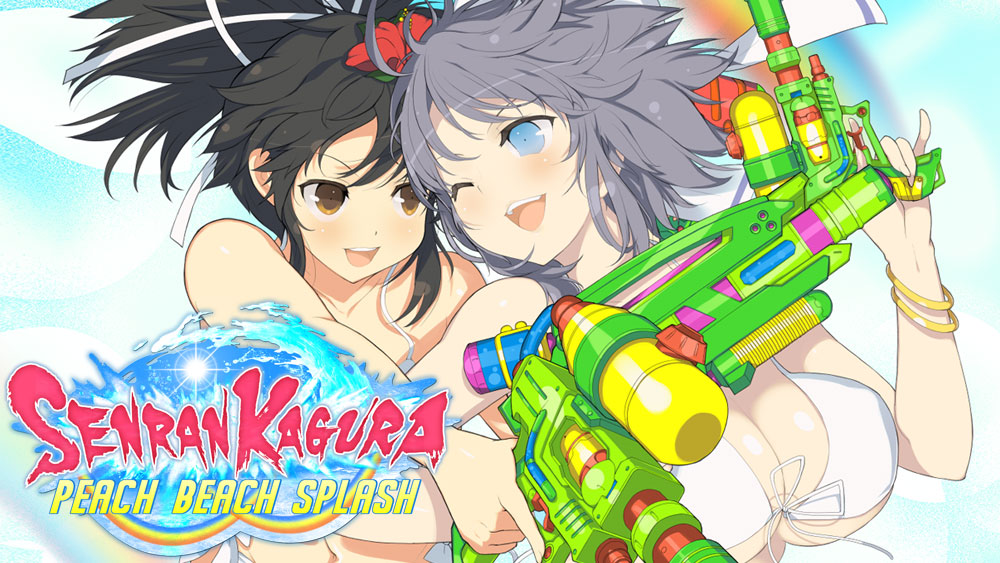 It probably won’t surprise anyone when I say that a Senran Kagura game is spilling over with fanservice. Peach Beach Splash is quite literally a game about getting girls wet until their clothes fly off. It should be pretty obvious right away whether or not you’ll appreciate what this game has to offer.

But unlike most previous titles in the series, this game doesn’t feature beat ’em up style combat. This time, it’s a third person shooter – although it doesn’t act very much like the examples that immediately pop to mind, like Gears of War or Uncharted. It’s an interesting change of direction, but does it pay off?

You also have access to Jet Dashes and Jet Jumps, thanks to the girl’s water powered jet packs. Mobility plays a big part in battle, as your water jets will let you escape sticky situations or manoeuvre into better positions. It’s very satisfying when it works, but it can be hard to get used to, especially with guns that have a low ammo count – shooting and using your jets both draw from the same ammo pool, which can be annoying at times. After adjusting it really was a lot of fun though, and it helps the game stand out from clunkier cover based shooters.

Players can choose to make use of an automated targeting system (which locks onto nearby targets) – again, this can be toggled on the fly with a shoulder button. This seemed like an odd choice at first – surely a shooter game with auto-aim is missing the point – but I found that letting the game handle targeting felt a lot better than trying to do it myself. This is down to the pace of the game and the mobility on offer – trying to aim at a moving target as they jet dash while you’re flying through the air as well is incredibly tricky. It also helps a lot during story missions, which often feature large mobs of mooks, as well as the occasional bigger boss battles. For players who don’t put much time into shooter games it’s a sensible addition, but it’s nice that you can switch it off if you don’t want the game to control your aim.

Aside from the gunplay, players are given a customisable skill deck as well. Taking the form of collectible cards (which are earned in game by opening packs), skills allow players all sorts of extra options in battle. Skills range from healing and buffing your team, to hitting opponents with a freezing or paralysing shot, or placing a static barrier to provide cover while you shoot. It’s a welcome bit of extra depth and customisation.

Peach Beach Splash features a solid amount of single player content, as well as online multiplayer modes. The game’s main story contains five chapters that last about an hour each, adding up to a good few hours of gameplay. The writing is light and fun, focusing on each team’s reasons to battle through the PBS tournament, and the obstacles they have to overcome in order to win. While much of it is fluff, it’s still quite enjoyable, with an endearing cast, lots of fanservice and sexual innuendo, and a pretty satisfying feel-good ending.

There are also 12 side stories to play through, featuring shorter scenarios that each focus on just a few characters doing their own things. Then there’s the V-Road Challenge, which pits you against four separate cups, each harder than the last. Failing in any battle knocks you back to the start of the cup, and battles do get decently challenging, requiring you to level up your team’s kit to stay competitive.

While I didn’t really get chance to test the Multiplayer modes much, the modes on offer include standard king of the hill, capture the flag and death match style battles. Evidently these matches can be filled with AI, but I wasn’t able to make that happen – I just sat looking at circles swirling for several minutes, usually. There should be more people to play with now that the game is out, though.

There’s also a co-op survival mode, tasking your team with defending platforms against the story mode’s various grunts, and this is much easier to play with AI bots. From the few rounds I played, the AI was functional and not much more than that. They seemed to default to base level equipment, which would probably limit how far they can take you through the increasing challenge. As you’d probably expect, it’s almost certainly more fun with friends.

The Dressing Room and Intimacy modes return from previous games, and as usual, there’s plenty of outfits, accessories and hair-styles to unlock and equip. There are different swimsuit options, including a custom bikini set for most of the playable characters, as well as a variety of outfits which either tear or become see-through as the girls get soaked up.

You can then take your customised characters into battle, offline or online, or hop into the Diaroma mode, where you can pose up to five girls in order to make your own scenes. I was able to throw together the picture above in just a few minutes, but there’s lots of options I didn’t tinker with, especially if you start playing with accessories to really make your custom outfits unique.

Graphically, the game looks pretty nice. It’s not a graphical powerhouse by any means, but the art style is colourful and the characters look great, bouncing and jiggling as they run around hosing each other down. It’s a bit disappointing that they more or less all share a single body model, especially since animations for Squirmy Finishes and victory poses repeat consistently throughout. It’s not a big deal, but it’s noticable, and it makes going for the Squirmy Finish a bit tiring after a while. Granted, you don’t really have to do it every time you knock someone over… but it feels good, y’know?

The game also has plenty of illustrations dotted throughout its story campaigns, and the soundtrack is upbeat and sets a lively mood for the game’s fast paced battles. The collectible cards have a lot of great art too, which makes them a lot more exciting to collect. There’s a lot of them to gather – I’ve opened quite a few packs and I’ve still got loads of empty spaces in my collection.

Peach Beach Splash is a fun game, packed with fanservice and frantic action. There’s a good amount of single player content to enjoy, particularly if you like collecting and unlocking things, and while I didn’t get to try the multiplayer offerings myself, they’re there for those that want to try them out. It’s not the most complex game out there, but it doesn’t try to be. What it does try to be is a fun-filled fanservice shooter, and I think it does that pretty well.

To put it simply, if you’re a fan of the Senran Kagura series, then this game offers more of what you like and it’s probably worth checking out for a slice of summer fun with the girls. If you don’t like the series so much, then you probably won’t find much here to change your mind. Personally, I had a great time with it, and I’m looking forward to going back to some of the side content that I didn’t get around to soon.

Senran Kagura: Peach Beach Splash is exactly what you think it is: busty bikini babes getting soaking wet under the summer sun. If you’re into that kind of thing, then you’ll find a lot to like here – fans of the series won’t be disappointed.

Fanservice aside, this is a fun and frantic shooter which, while not the most complex or skill-heavy, still manages to be entertaining throughout the game’s several hours of content. Obviously, the shamelessly lewd content might not be for everyone.