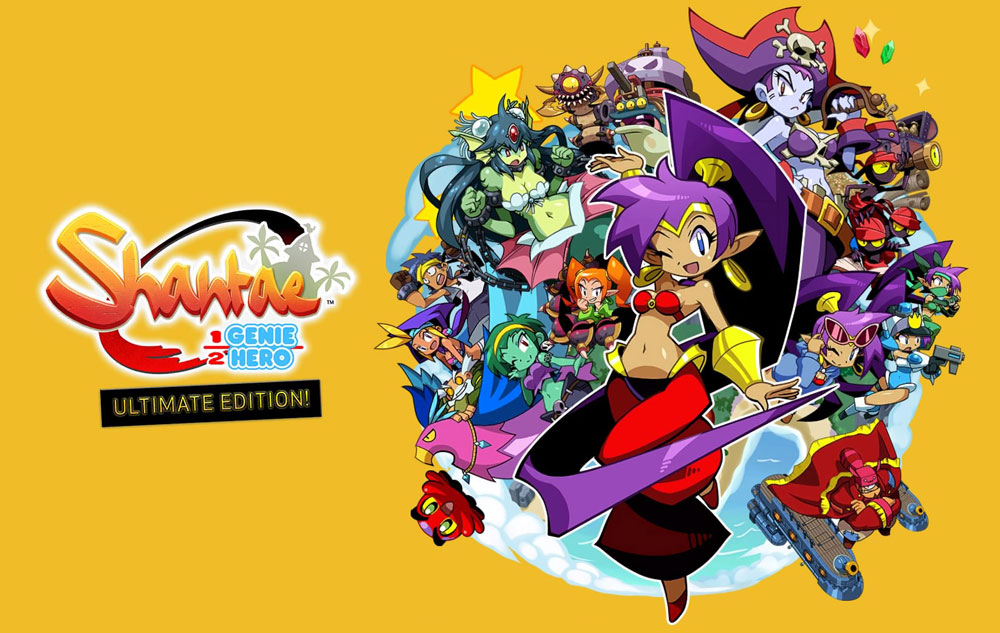 Shantae: Half-Genie Hero Ultimate Edition compiles the full Half-Genie Hero game and its DLC to create an attractive package for newcomers to the series and veteran fans alike. There’s a lot to like in this game – it’s a fun side-scrolling platformer with a unique and quirky sense of humour which permeates the game’s story. There’s character in every aspect of the game’s presentation, from the excellent and catchy music (a trademark of WayForward games) to the colourful and animated art-style. 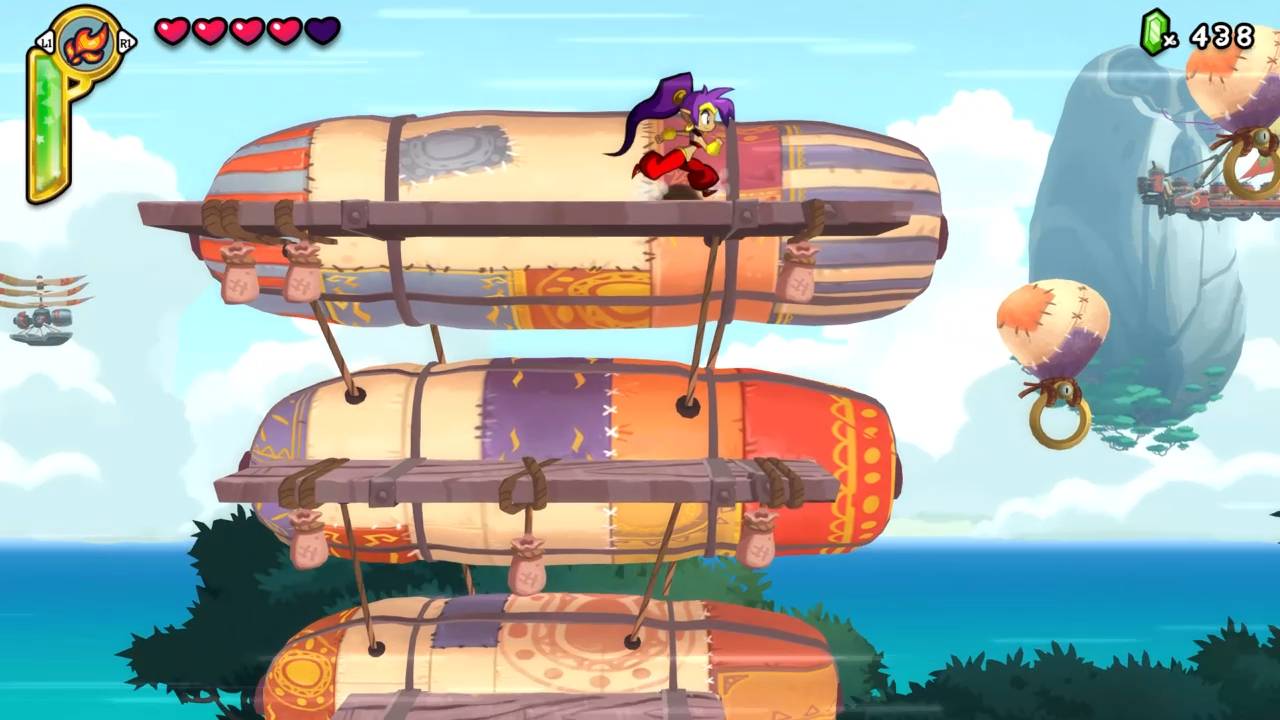 Players control Shantae, the eponymous Half-Genie Hero, as she navigates a variety of vibrant levels, swivelling her hips and whipping her hair. Platforming is tight and satisfying, and offers some occasionally tricky jumps to keep things interesting. By collecting gems throughout the stages, players can purchase and upgrade a number of magic spells that augment Shantae’s combat abilities, lending a little more variety to the combat against both regular enemies and the game’s screen-filling bosses. 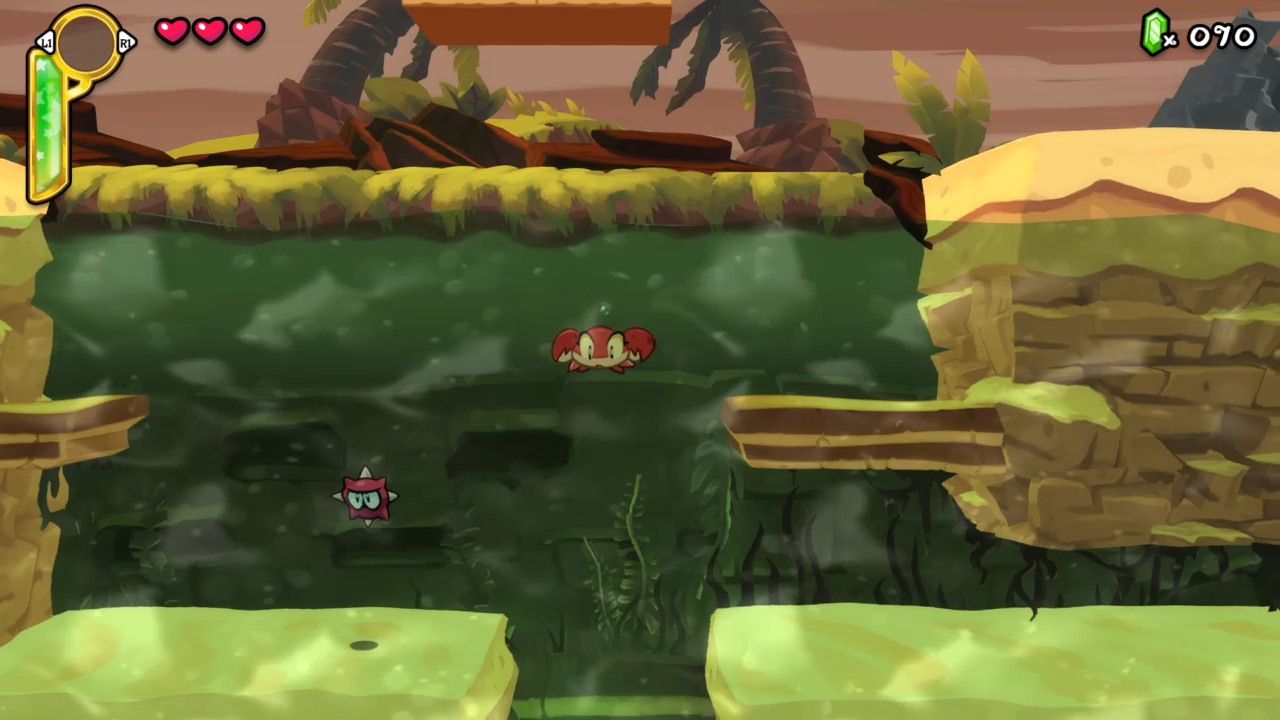 The game’s main ‘gimmick’ is Shantae’s ability to use the power of dance to transform into a number of creatures and objects. These transformations grant Shantae new abilities to help her get around the world; the crab transformation, for example, lets her travel underwater, squeeze into tight gaps, and cut through vines to open new path-ways. Using these abilities is very enjoyable, and they help to keep the game’s platforming from growing too monotonous throughout, as you’re encouraged to switch form frequently. 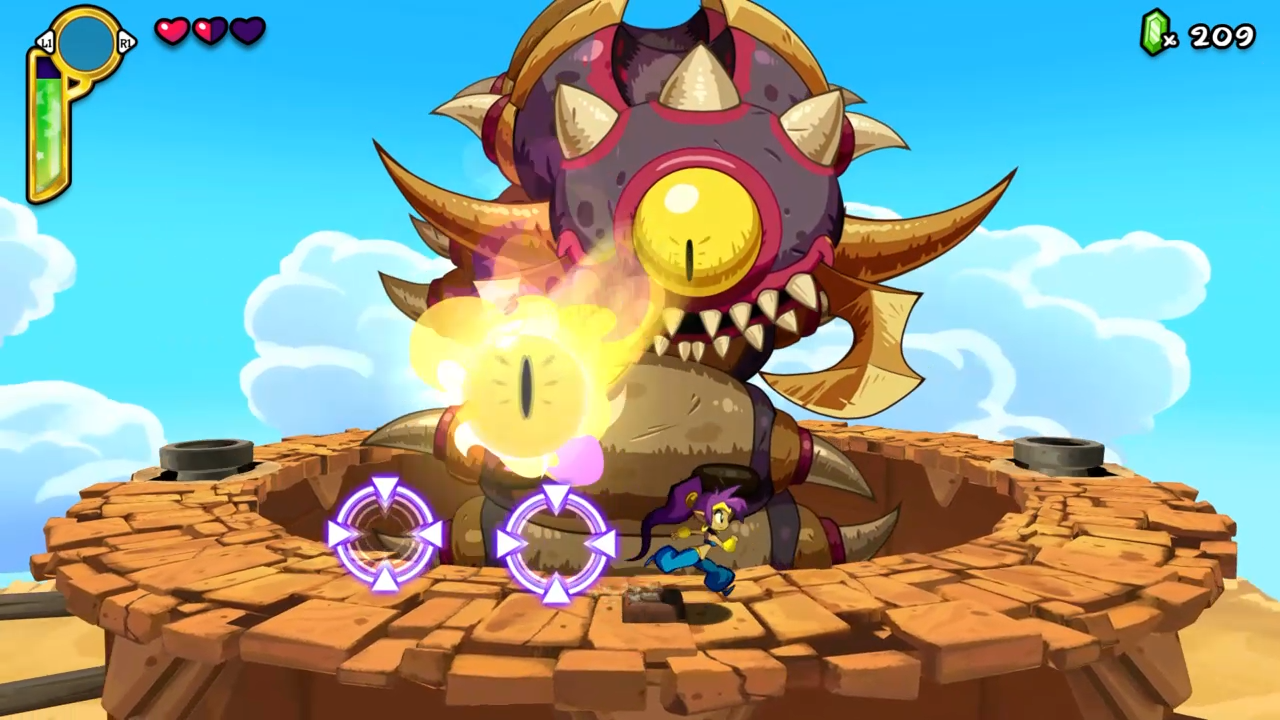 These transformations also allow Shantae more options to explore previously completed levels, which is a staple of the Shantae series. Backtracking is a key part of the game, as you’ll be asked to revisit levels with your new tools in order to find story-critical items, as well as a healthy number of secrets and upgrades. Your feelings on backtracking may colour how you feel about this aspect of the game – personally, I don’t mind it, but I did find myself growing a bit tired of particular levels by a point (more on that later, though). One nice thing to mention is that the levels do change a little bit after particular events, meaning that your second visit isn’t exactly the same as the first. 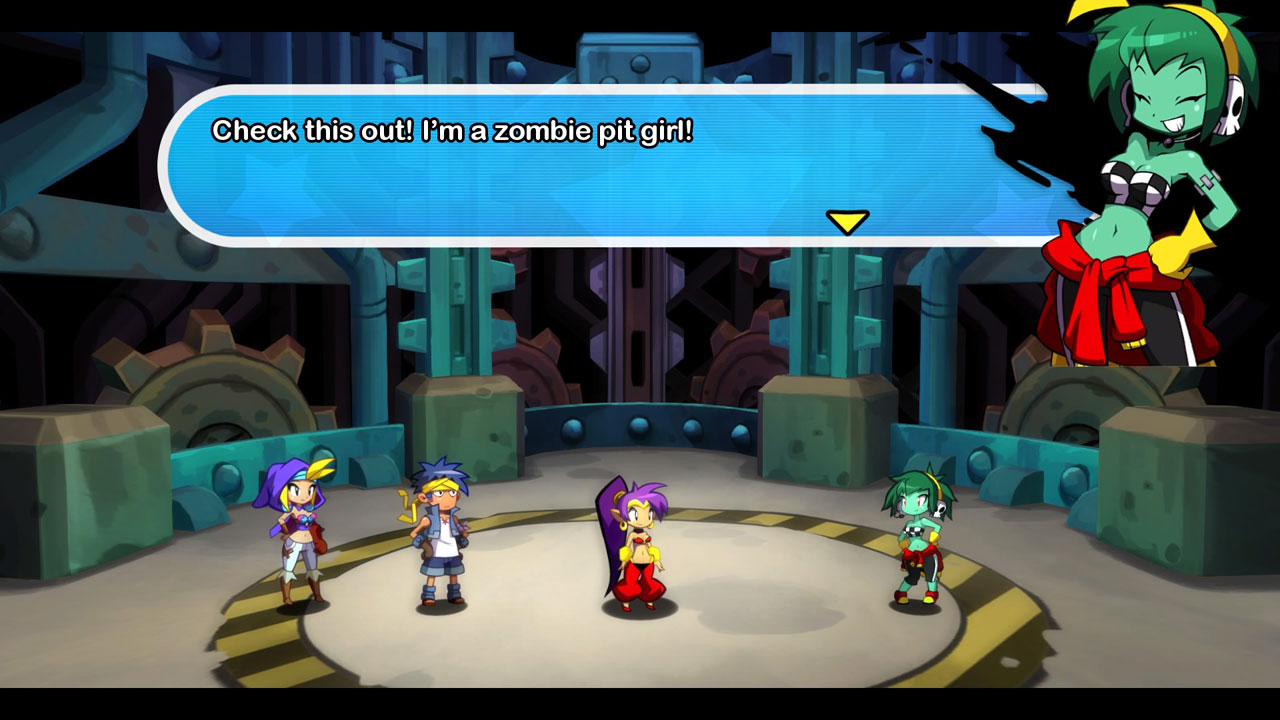 The game’s story and writing is enjoyable, with the series’ particular sense of humour coming through in everything from item descriptions to NPC dialogue in the game’s hub town. It isn’t a story of particular depth or substance, but it never aspires to be – this is a simple adventure that’s easy to get into and enjoy. I’m still a particular fan of Risky Boots (Queen of the Seven Seas!) and Rottytops the zombie. 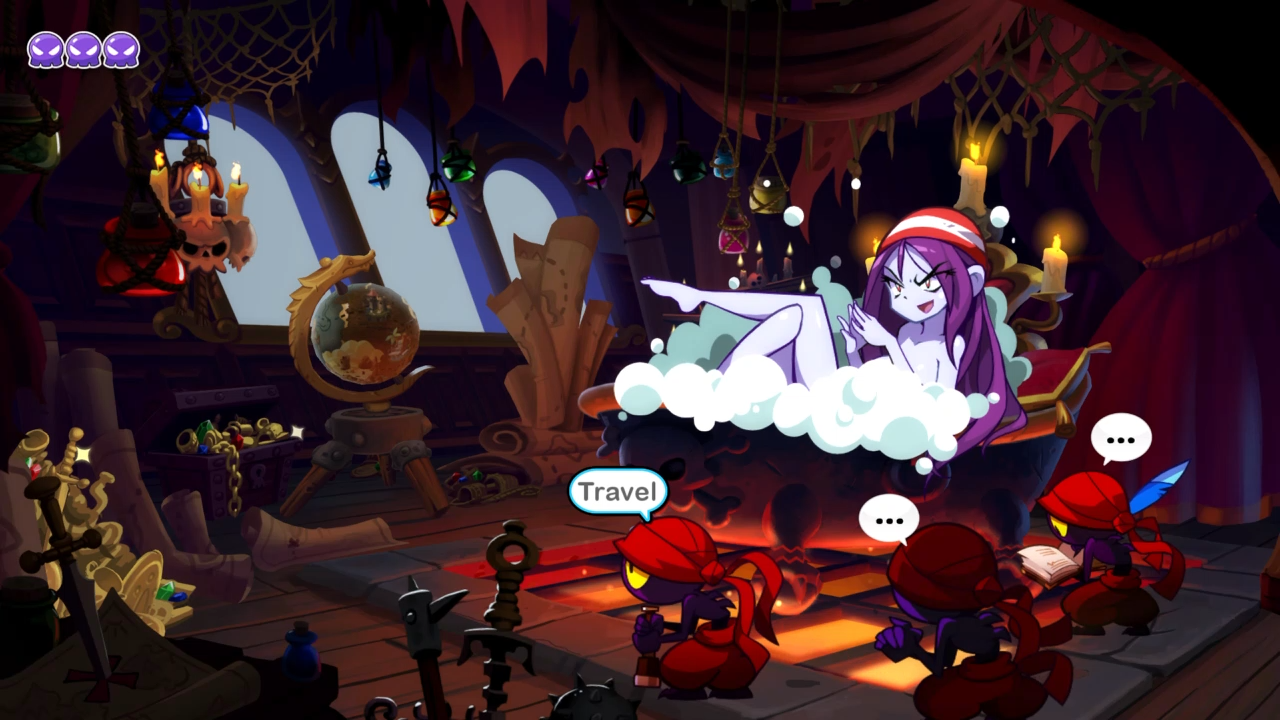 As mentioned before, the Ultimate Edition comes packaged with the game’s DLC expansions. There’s quite a lot of extra content in the game, as a result. The game also includes Hero Mode, which lets players play the game’s main storyline with all of Shantae’s powers unlocked from the start, and Hardcore Mode, a much more difficult version of the main game for players seeking a greater challenge.

All of the DLC is accessible from the start, so players looking to pick the bundle up just to play the DLC are in luck. It’s worth playing through the main story first if you haven’t though, since the two major DLCs pick up around half-way through the story and spoil one of the game’s main twists. 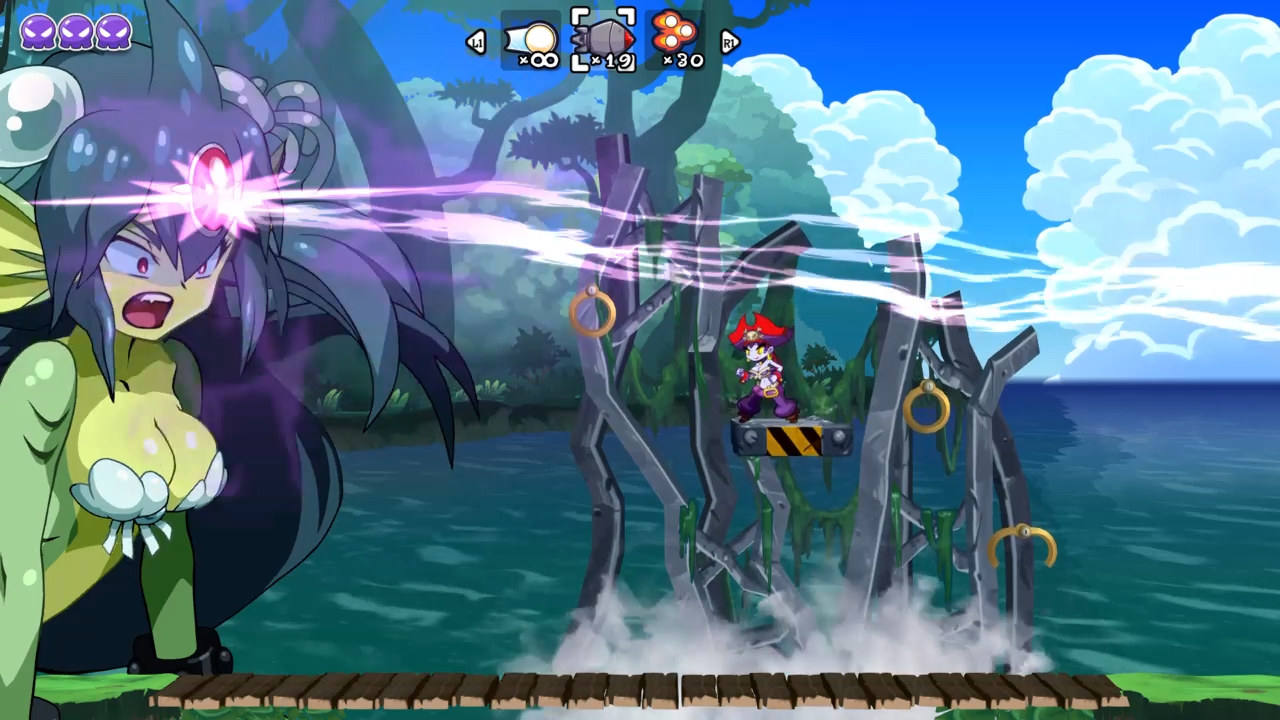 The first major DLC is Pirate Queen’s Quest, in which players control Risky Boots, seeing her side of the game’s main story. Risky moves and fights similarly to Shantae, but she has a few of her own tricks and tools (such as the glide-enabling Pirate’s Hat and the Grapple Gun) which change the way she gets around levels enough to give the game a new flavour.

This is a good thing, since one problem I have with the game’s DLC is that they largely re-use stages and boss fights from the main story, with some adjustments made to level designs to accomodate each DLC’s core gimmick. This does make things a bit repetitive, but there’s still fun to be had here. 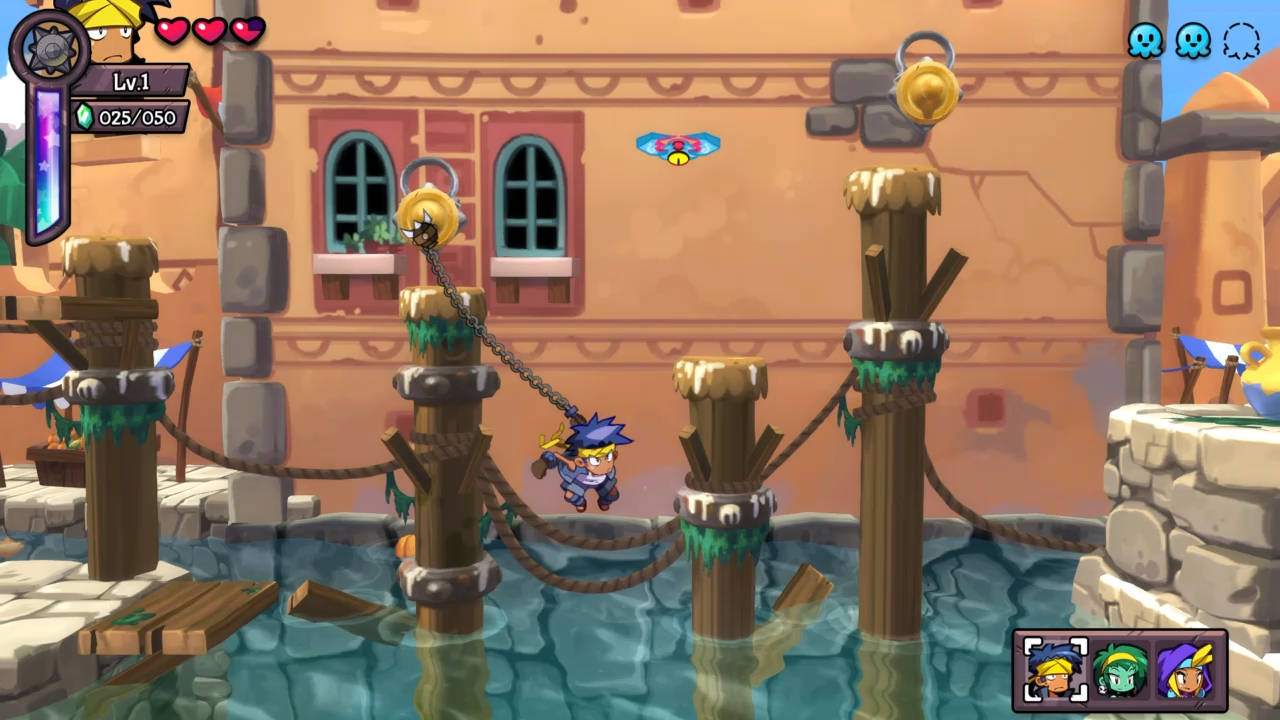 The second major DLC is Friends to the End, which sees players controlling the trio of Bolo, Sky and Rottytops as they try (and struggle) to get along to save their friend, Shantae. This DLC offers a much bolder change to gameplay style than Pirate Queen’s Quest, as all three of the characters have unique abilities which must be used to traverse the game’s stages. As a result, it feels more like a puzzle platformer than the other game modes.

Bolo can use a grappling claw to swing from hoops, Sky can create stationary platforms in the air, and Rottytops can detach her head and throw it, shifting her body to wherever it lands. You’ll be swapping to and fro between the would-be-heroes a lot, making use of each unique talent to work your way through the game – again, repeating many of the same stages from the main story. One thing I’ll mention is that Bolo’s grappling hook is a little frustrating to get used to, but overall it’s a nice departure from the norm. 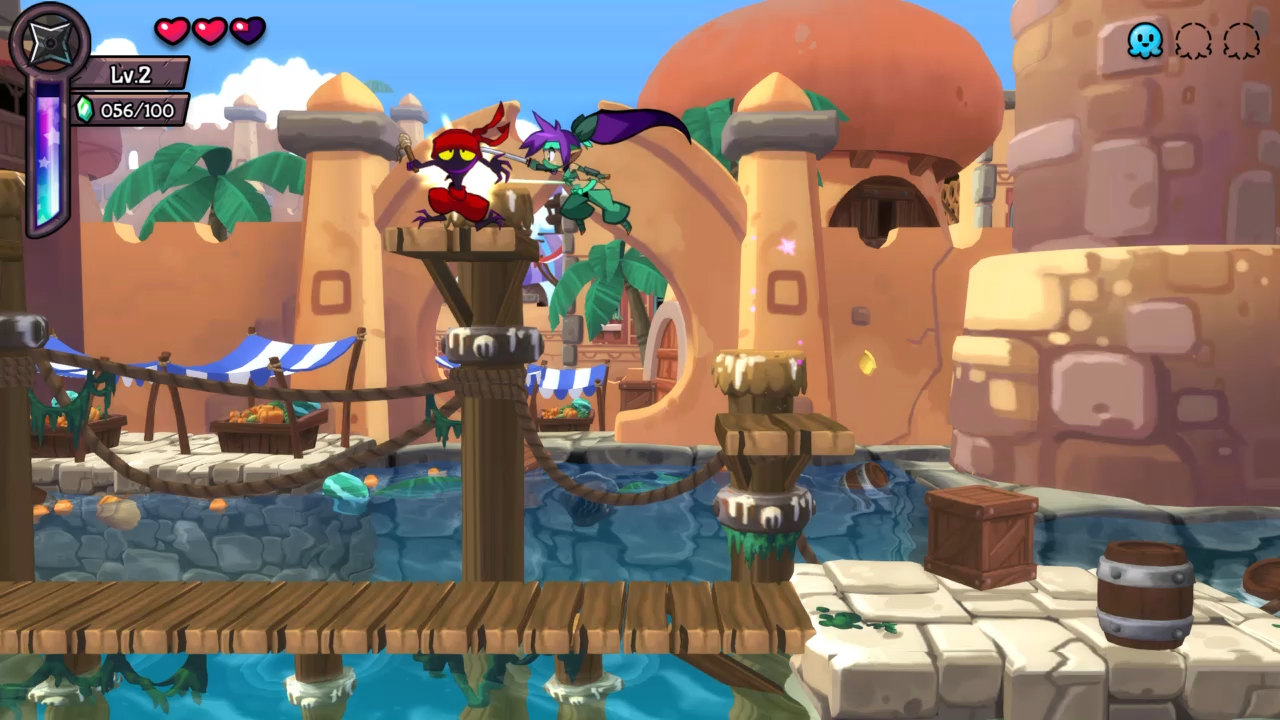 Finally, the game’s Costume Pack DLC adds three new game-modes (once again using the same levels and bosses). In each DLC you play as Shantae in a different outfit, each of which brings its own twists to the gameplay. It’s certainly a unique take on the idea of a ‘Costume Pack’, if nothing else. These modes can be quite challenging, too, due to the lack of consumable health items.

The first costume, shown above, is Ninja Mode. In this mode, Shantae must use her mail-order ninja suit’s powers of running fast, wall-jumping, teleporting and throwing ninja-stars to progress through the game. Players level up by collecting gems, improving their abilities. The game feels a bit faster paced in this mode, but it’s otherwise the most similar in style to the main game and should mainly be played if you want a bit of extra challenge. 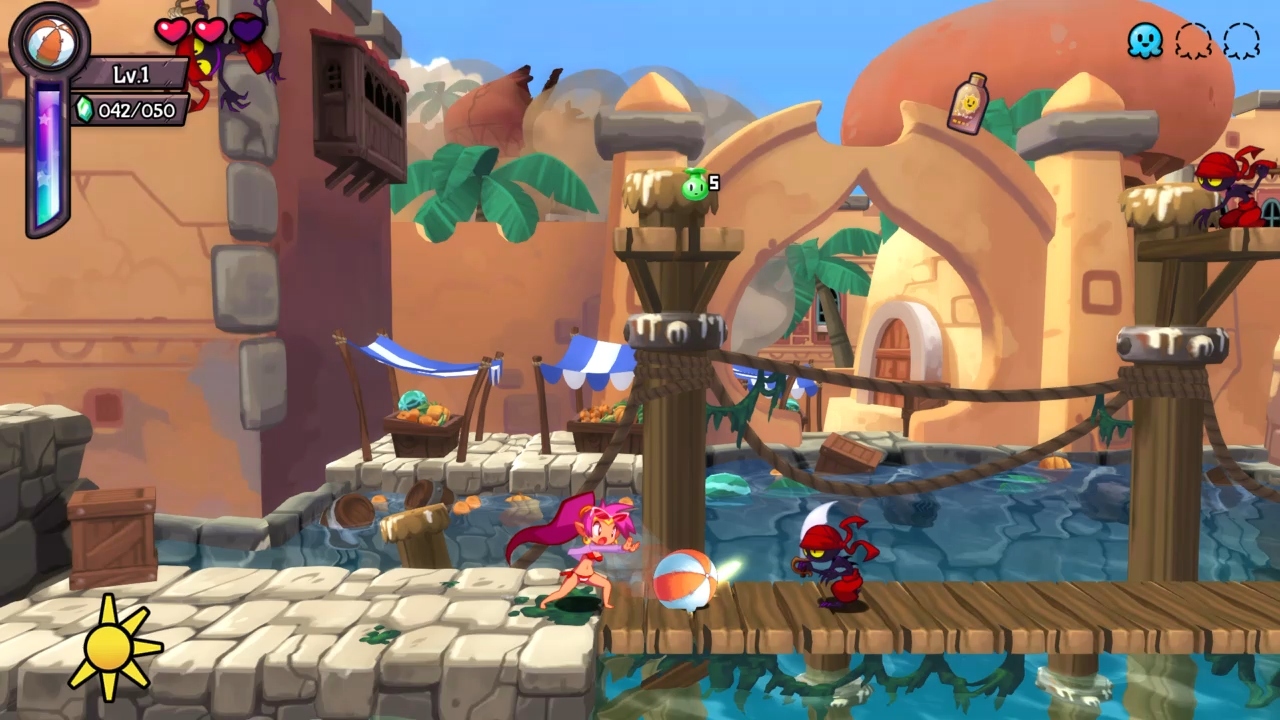 Beach Mode sees Shantae on a quest for a perfect day at the beach. Alongside the ability to project a floating bubble and a beach-ball projectile, Shantae must make sure to keep cool, or face apparent spontaneous combustion. It’s a harsh reminder to always wear sun-screen!

Shantae can cool off and reset the ever-ticking sun-burn timer by grabbing sun-screen bottles placed around the levels, or by taking a quick dip in any water she comes across. This mode can get quite hectic, since it’s easy to find yourself forgetting about the impending doom of a terrible sun-burn, leading to desperate dashes to the nearest pool of water. 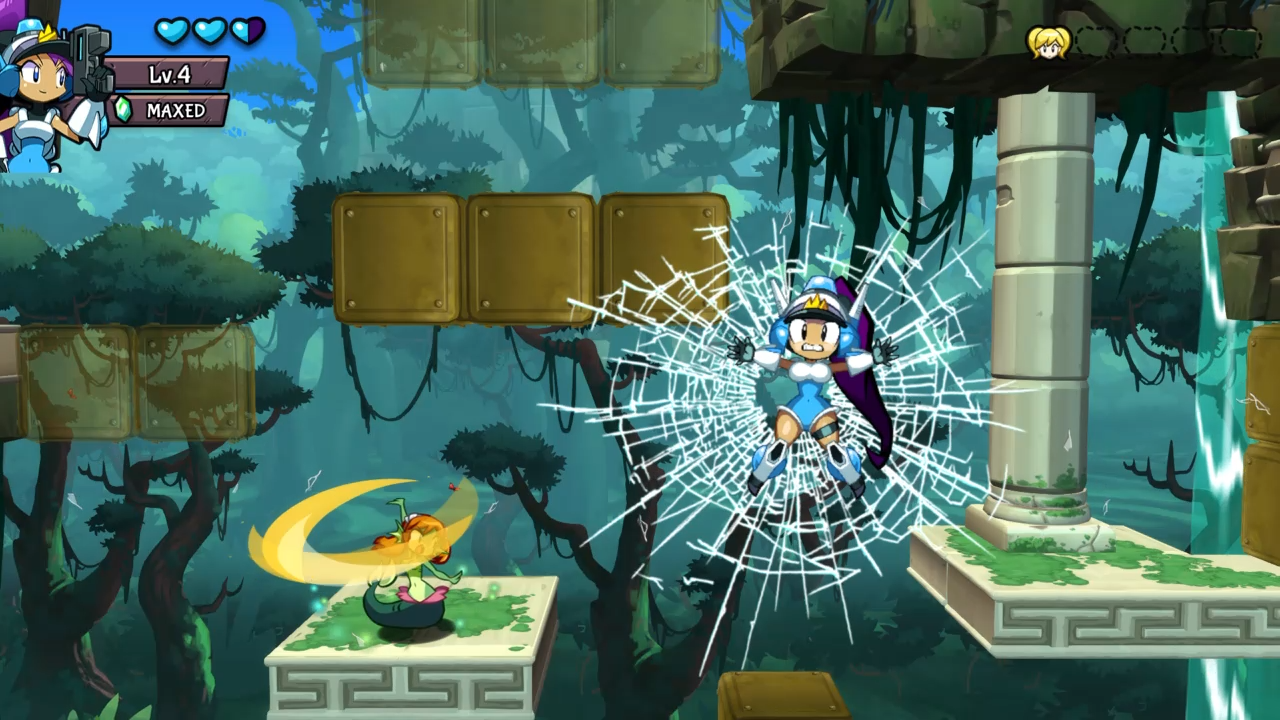 Officer Mode is without a doubt my favourite of the three Costume modes. In this mode, Shantae dons the outfit of a Galactic Penal Squad officer and sets out to capture Space Hooligans throughout the game’s familiar levels. This mode features the most drastic departure from Shantae’s familiar style of gameplay by turning the game into Mighty Switch Force, complete with that game’s incredible soundtrack, and a number of charming references that had me smiling throughout.

For those that haven’t played Mighty Switch Force (and I recommend that you do!), the core of the game’s puzzle-platforming gameplay is the ability to use the Siren Helmet to ‘switch’ blocks between foreground and background. Blocks in the foreground can be stood on, while blocks in the background can be passed through. This can get quite tricky as the game goes on, as you’ll need to time your switches properly to avoid falling through platforms, or worse – sending poor Shantae careening right into the screen. It’s a great new twist on what, by this point, are very familiar levels. 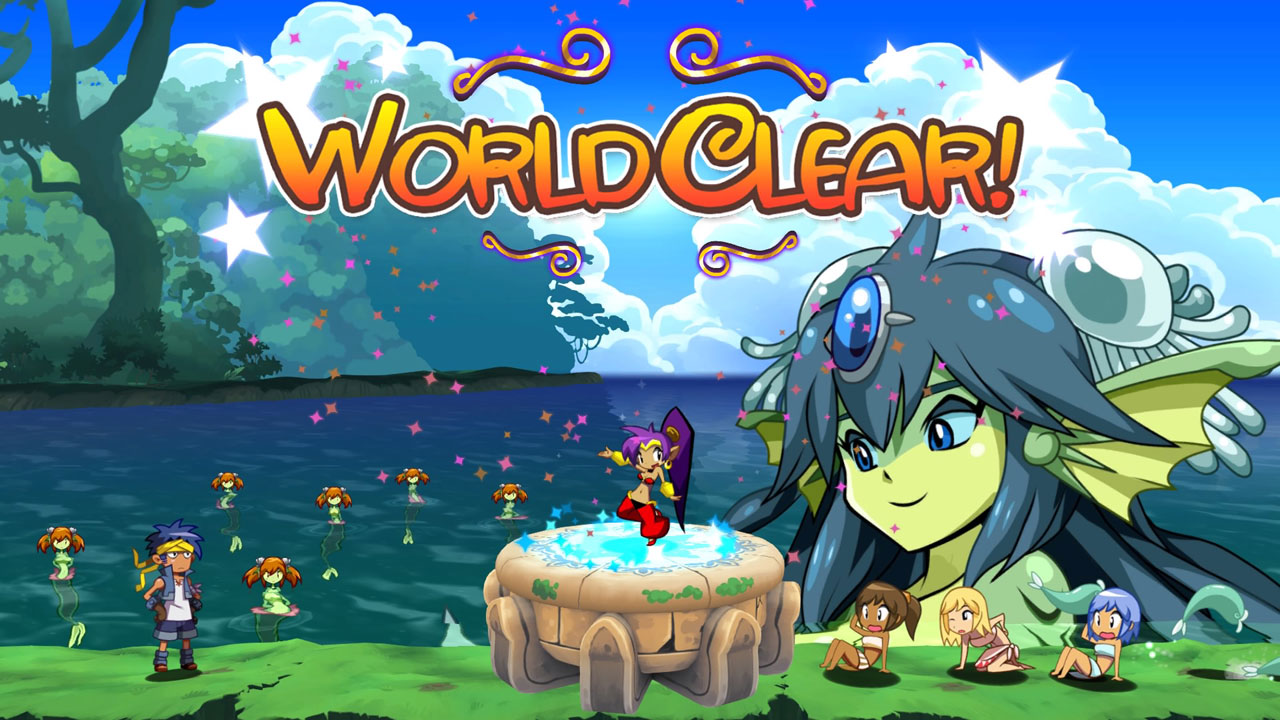 Overall, I think Shantae: Half-Genie Hero Ultimate Edition is a game worth picking up if you’re a fan of the series, or just a fan of platforming games in general. It’s not the most difficult game out there, but it offers enough challenge to remain interesting throughout. There’s also incentives to explore and gain 100% completion, and the inclusion of the tougher Hardcore mode, which is great for fans who want that extra challenge.

As well as the main game, the game’s DLC and its several diverse game modes means that there’s a lot of content to enjoy, and none of it feels too similar to other modes – even if the game heavily re-uses its selection of levels and bosses throughout. It’s also a wonderful game to look at and listen to – I can’t overstate how catchy the soundtrack is, and I love how energetic the animations are, especially for Shantae and Rottytops. And of course, Shantae herself continues to be a charming protagonist – I can’t wait to see where WayForward takes her next.

The complete bundle of Shantae: Half-Genie Hero and its DLC creates a bundle of fun that’s hard to say no to. In terms of ‘bang for your buck’, this game offers a lot for fans of both fans of the Shantae series, and fans of platforming games in general. While not the most challenging entry in the series, there’s a lot to enjoy for veterans and newcomers alike, thanks to the game’s excellent presentation and charming characters. Just be warned that you’re going to see a lot of Main Street.