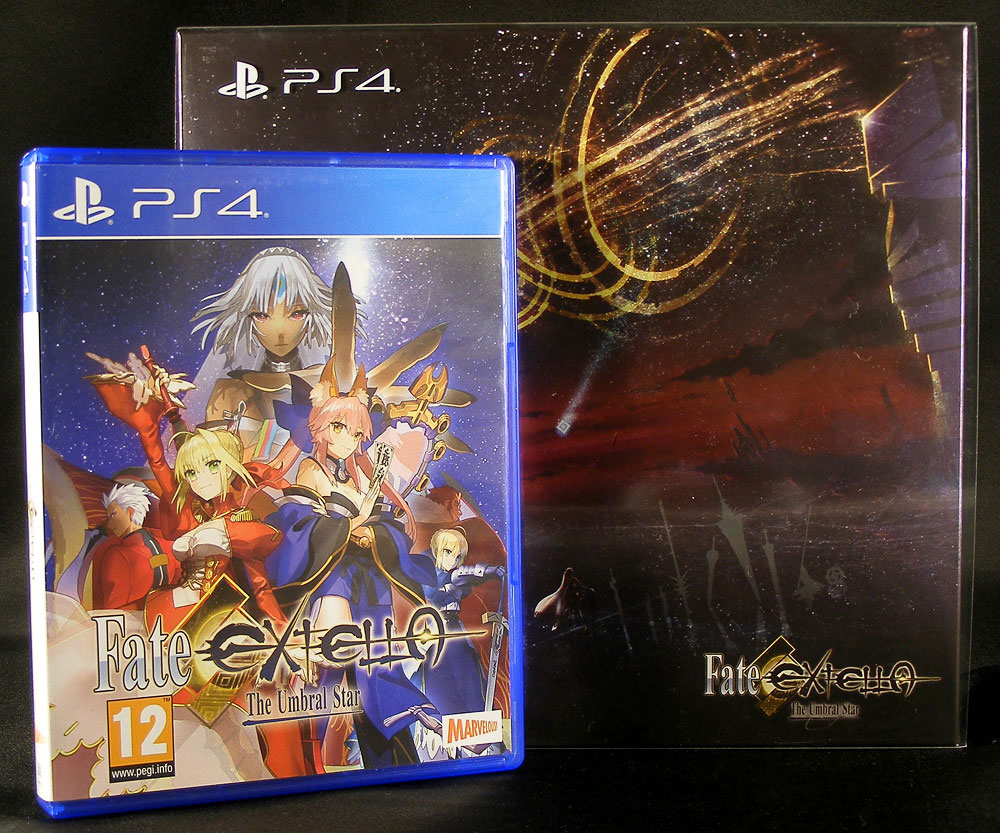 This is a review of the Moon Crux edition of Fate/Extella: The Umbral Star, and only covers the contents of this collector’s edition. [You can read my review of the game here.]

The Moon Crux edition of Fate/Extella is a very appealing little package indeed. It arrives in a robust cardboard box with a plastic sleeve.

The box has a very attractive design – its front depicts Altera stood among the signature weapons of every other Servant in the game, watching the eponymous Umbral Star pass by, while the rest of the box is decorated to resemble a starfield. The art has been printed with a light catching reflective quality that definitely makes the design pop.

The plastic sleeve, meanwhile, has a few logos on the front and illustrations of all 16 servants on the back, along with the standard information you’d expect. It’s a nice touch that you can remove this part, should you want to display the box on your shelf with a bit less visual clutter in the way.

Inside the box, you’ll find four things – the first is a 24″ x 17″ cloth poster, depicting Nero Claudius and Tamamo no Mae clashing in their new Moon Crux forms. As with all the art in Fate/Extella, the poster is illustrated by Wada Arco, and it’s a very dramatic image – my photo doesn’t quite do it justice, so I’ve included the original art as well. It would definitely look great on a wall.

There are two metal hoops punched into the upper corners so you can hang it up easily. As you can see, the poster has to be folded to fit into the box, and this leaves it badly creased – the bright side is that, since this is a cloth poster, it should be quite easy to iron the folds out, and it should be more durable than paper posters too. Of course, do be careful with it! Start at a low temperature, iron the back of the poster, and put something between the iron and the poster to minimise the chance that you might damage it.

Next is the Fate/Extella Material art book, which is the star of the show, and the reason I bought the Moon Crux edition. I’m pleased to say it doesn’t disappoint.

The book is a 7.5″ x by 6.3″ hardcover with over 100 pages. It’s a bit on the small side, but it feels high quality in terms of production, and the amount of content is a massive step up on the typically poor 20-odd page books that you get with many other collector’s editions.

The contents are fully translated, and that’s a strong selling point, since there’s quite a lot of reading material in here: every Servant has their statistics and skills detailed thoroughly, and the last 30 or so pages feature a glossary that extensively covers not just the lore of the game, but also terms and characters that are only referenced in passing, and even details that were cut entirely from the final product.

Then, there’s the plethora of art, including all of the game’s character illustrations (featuring all of their expressions and alternate outfits) and compilations of rough sketches by Wada Arco, as well as concepts and image boards for the various environments in the game. My favourite parts of the book are definitely the rough sketches, which contain some really cute and funny drawings, and even a cameo or two – it’s just a shame that these aren’t present for every Servant.

As a word of warning, I would recommend not looking at the book until you’ve beaten the game, as it does contain plenty of spoilers that aren’t exactly hard to stumble onto. As a nice touch, the contents page does contain a warning – it’s a small note, but it’s nice to see.

Underneath the art book you’ll find your third item – a copy of the game. It’s pretty self explanatory! The included copy is the same as any other copy you could pick up off store shelves. You can find my review for the game linked at the top of this post.

Then, tucked under the game is the final treat in the box – a set of sixteen 3″ x 5″ art cards. These cards depict the game’s sixteen playable Servants, using their key art. Again, these cards are well made – they feel sturdy, and the illustrations are colourful and clear. The art is printed on a plastic material with a translucent background that lets the light shine through, like so:

These are a nice little bonus, though I’m not sure what you’d do with them – they might look nice displayed in front of a backlight, if you can set that up. It’s also worth noting that these art cards were available as a preorder bonus from some retailers, but these were printed on plain card – only the cards included with the Moon Crux edition feature use the translucent plastic.

There’s also a nice little easter egg involving these cards – as a hint, you should take a close look at their backs. It’s pretty inconsequential, but it’s one of the little things that shows the care put into this package.

All in all, Fate/Extella’s Moon Crux edition is what collector’s editions should be. There are no DLC codes, none of it is available separately elsewhere, and the whole thing has a substantial quality to it – especially the excellent Fate/Extella Material book, which could probably justify the extra cost of picking up this edition on its own.

To make it simple: if you’re a fan of the Fate franchise – particularly the Extra series – you should definitely consider picking one of these up.

Fate/Extella’s special Moon Crux edition is what special editions should be. The star of the show is the excellent Fate/Extella Material artbook, which is worth the extra price all on its own. A must have for fans of the Fate/Extra series.