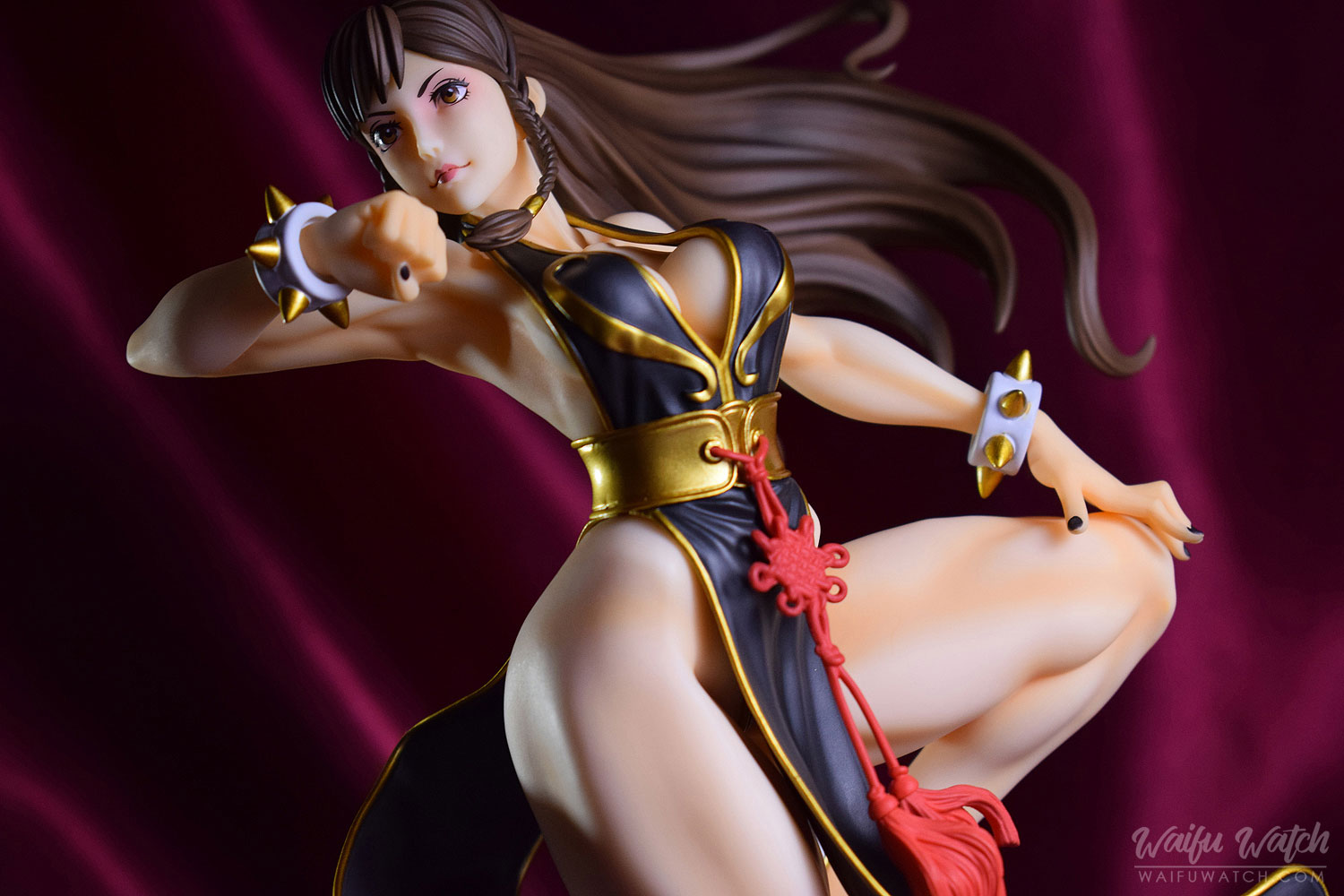 Want to see my Kung-Fu? I’ll show you.

Today we’re taking a look at one of the latest figures in Kotobukiya’s Bishoujo Statue series – Chun-Li, from the Street Fighter series. The Bishoujo Statue line is a series of figures that takes various comic, movie and game characters and represents them in a bishoujo (beautiful girl) style. These figures are all based on illustrations by renowned artist, Shunya Yamashita, whose distinct style shows through clearly throughout the series despite the variety of sculptors that have contributed.

Chun-Li (seen here in her ‘Battle Costume’ alt outfit from Street Fighter V) could easily be considered the female face of fighting games; she’s one of the most famous and popular women in video game history, and has been throwing out Lightning Kicks since Street Fighter II released in 1991. Since then she’s appeared in many of Capcom’s releases, including the majority of Street Fighter games, as well as various cross-over titles like Marvel Vs. Capcom and numerous cameos beyond that. She’s iconic, without a doubt. Personally, I’ve always loved her design – she’s one of my favourite women in fighting games (a genre that I’ve sadly never been great at), up there with Baiken and Mai Shiranui.

Chun-Li gives a striking first impression – her body immediately impresses with the detailed craftwork put into rendering her musculature. She certainly looks like a trained martial artist, and her thighs are immediately outstanding. Her elegant outfit fluttering about her body and her striking pose complete the aesthetic, making Chun-Li quite a handsome figure when she’s out on display. This is especially true if you find the light catching her body in such a way that her sculpted physique is emphasised.

However, you might find yourself thinking there’s something a little off about her – in which case, you’ve probably looked at her face. Her face is actually quite pretty, and resembles Shunya’s art style closely; the sculptor, Busujima Takamaki, has done a great job there. Her face straddles a half-way point between typical anime style and more Western realism, lending a more defined nose and lips. The problem is her eyes – there’s just something not quite right about them. But we’ll get back to that a little later.

For now, let’s talk briefly about the packaging. As you can see, it’s a fairly standard box, emblazoned with Shunya Yamashita’s illustration and the Kotobukiya logo on almost every side. On the front you’ll find a gold Capcom sticker, presumably to signal that this is officially licensed merchandise. If it wasn’t obvious, this product is clearly meant to be sold worldwide – there are warnings and information in a variety of languages, including a brief profile of Shunya on one side.

Inside the box, Chun-Li comes fully assembled, already attached to her stand. 10/10 for ease of assembly! That said, there is actually a bit of optional assembly to be done, as the figure has a neat trick up it’s sleeve (or rather, in its base). Chun-Li’s stand is fully see-through (which looks quite classy by itself) and can, with some fiddling, be pulled apart. This lets you slip in one of two plastic slides (included in the box) to customise the base – the first slide is simply the Street Fighter logo, while the second is the logo with Shunya’s illustration. Since these slides are simply circular cut-outs, you could even make your own if you wanted to. It’s a neat touch.

As I mentioned earlier, Busujima Takamaki has done a great job sculpting Chun-Li. Her resemblance to Shunya’s original illustration is obviously evident. It can’t be understated how impressive the muscle definition is on this figure; from head to toe, Chun-Li looks powerful and fit, without looking grotesque. If I were to go through poring over every little detail, we’d be here all day. To put it briefly, I find her thighs particularly impressive, as well as her back and shoulder muscles. I’m personally a big fan of women that have this level of muscle definition (I have a fondness for fitness models), and this figure is a love-letter to that audience. This look works particularly well for Chun-Li, too, as she has long been renowned among her fans for her physique, particularly her impressively powerful thighs. Takamaki really did an excellent job capturing the essence of the strongest woman in the world.

The quality sculpt-work continues to her clothing as well, which flutters and ripples appropriately about her body. I particularly like that the embossed gold details on her dress are also creased and folded – it helps to emphasise the impression of fabric that the dress offers. The little details continue to her shoes, which have textured soles, and the red accessory which dangles from her belt, with its detailed tassels. Chun-Li is bold and striking, and looks fantastic from almost any angle.

That said, there are some problems with the figure. Earlier I mentioned that there was something off about her face – the problem being her eyes. While her nose and lips are very good, her eyes are… hit-and-miss. Presumably because of the way they’ve been sculpted (they’re much more rounded than a typical anime figure’s eyes, which are usually quite flat), Chun-Li’s eyes have a tendency to look like they’re bulging out of their sockets from several angles. Sometimes they look fine, and then sometimes she starts to resemble Gilles de Rais from Fate/Zero… Well, maybe it’s not that bad, but it’s still a pretty notable quirk that spoils some of her visual appeal.

Another odd spot is her breasts, which are… hard to describe. From what I can tell, they look a bit like they’ve been stuck on, rather than naturally flowing from her chest – it’s almost like the cleavage has been over-defined. As well as that, while most of the smaller details are nice and clean, others are bit rough. Her hair, in particular, isn’t as crisp and detailed as the prototype photos showed. While the front (particularly her fringe) is nice and sharp, the back of her hair sort of looks like a big lump, especially on the back side, where there are some questionably iffy details. Annoyingly, her hair covers a lot of her wonderfully sculpted back, making her back-view a lot less appealing. There are also a few small production marks here and there, though these aren’t a big deal.  Overall, the quality is still pretty good, but these problems do lower my overall estimation a little.

Compared to the sculpt-work, the paint-work is not quite as good. While the overall quality is still fairly high, there are far more noticable flaws. These run the standard gamut of figure painting flaws: the gold detailing on her dress often wiggles in and out of the lines, while her fingernails haven’t been painted neatly at all. The gold spikes on her bracelet haven’t been painted down to the base, and the red accessory dangling from her belt seems not to have been painted at all, making it stand out and look sort of cheap. There’s also some odd scratches in the paintwork that show up when the light hits them, and for some reason there’s a translucent glob on one of her hips that I can only assume is glue. Luckily, these don’t show up too badly (you probably won’t notice them in the photos I’ve taken, which is unfortunate – I promise they are there, though!) and can mostly be ignored.

Otherwise, there’s a lot to appreciate about the paintwork. Subtle shading has been used to further accentuate Chun-Li’s muscle definition, which suitably enhances how striking her body is. Her hair is similarly shaded to add some volume and definition to what is an otherwise roughly sculpted aspect of the figure. Her dress uses two different finishes for the black and gold fabric, which add a lot of visual flavour and variety to the figure, and once again helps Chun-Li pop out. Her face, too, has been carefully painted, with a subtle rosy tint around her eyes, and neatly applied lipstick. So, like I said, there’s actually a lot of good work on show here. Still, the slightly spotty standard doesn’t quite match up to the more premium figures, which is a shame. 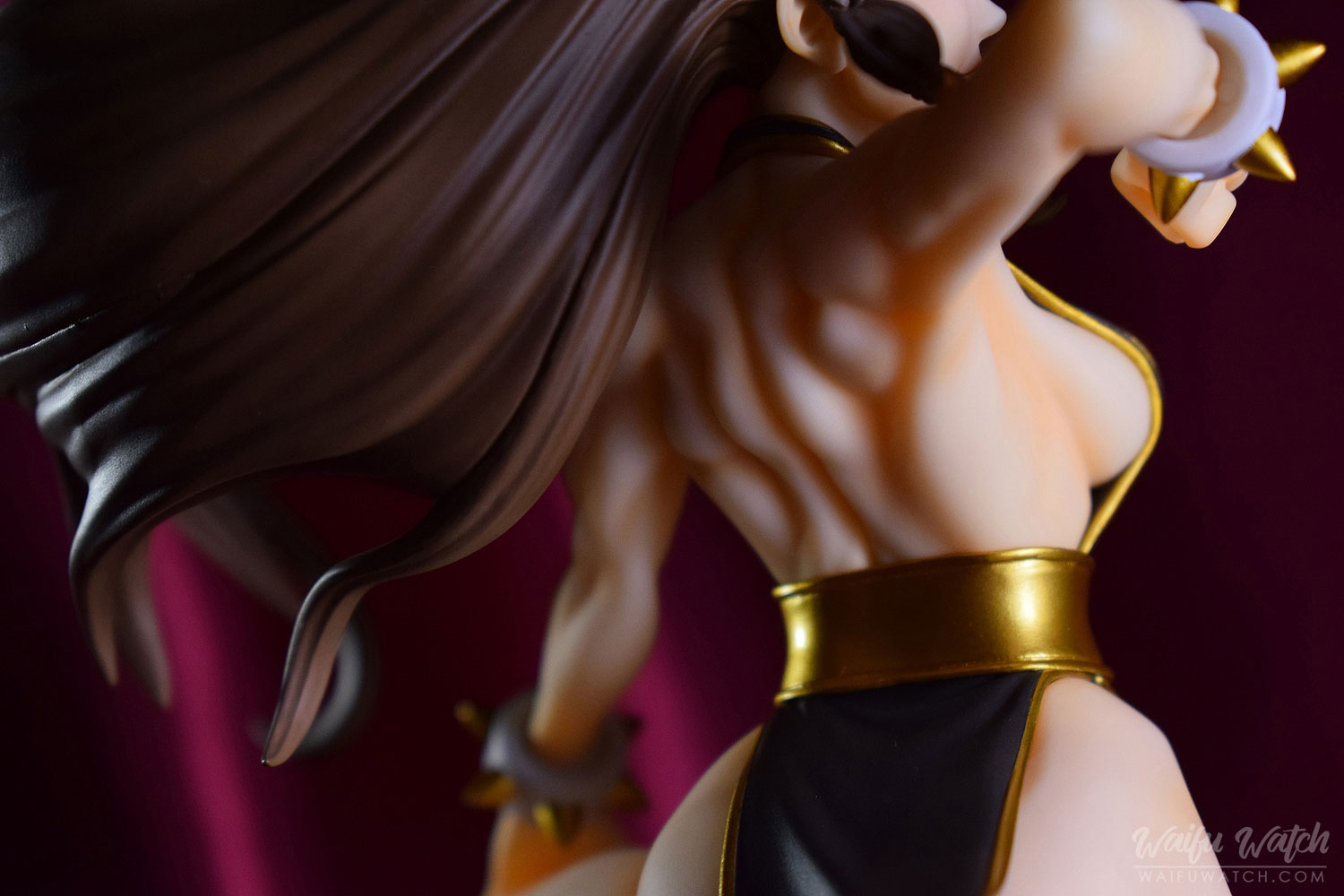 I am the strongest woman in the world!

Despite my complaints, I still think this is a thoroughly appealing figure – a solid piece of work, for a solid price.

Looking past the more notable issues like her boggle-eyes and tacked on bosoms, or the minor production flaws that plague many figures, the overall package is still impressive to look at and should make an appealing addition to any collection. While this level of muscle definition might not appeal to all people, it is part and parcel of Chun-Li’s character, and I think Shunya and Takamaki both did a good job capturing what makes Chun-Li so appealing without overstating things. She certainly will stand out among more typically proportioned characters, but not in a way that makes her seem grotesque, unnatural or out of place. In fact, I’d say there’s a pleasing contrast between the elegance of her outfit, the poise of her pose, and the strength of her physique –  it all comes together to create an attractive whole.

For fans of Street Fighter and Chun-Li, I’d recommend taking a look at this one – it might be just what you’re looking for, and is certainly one of the more appealing Chun-Li figures that I’ve seen in my browsing. I’m more than happy to have her in my collection. Moreover, as my first figure from the Bishoujo Statue series, I’ve been left with a good impression overall; I’ll certainly be keeping my eye on future releases, and perhaps adding more to my collection somewhere down the line.

Kotobukiya’s rendition of Chun-Li is a lovely figure held back from excellence by a few small problems and noticable weak spots. If you can see past her boggle-eyes and the smaller production flaws, then there’s a lot to love about this figure, from her striking pose and outfit, to her chiselled musculature. A solid pick up for any fans of the undisputed thigh queen of fighting games!

When it came to shooting this figure, it seemed important to emphasise two things: Chun-Li’s impressive body and musculature, and the elegance of her outfit. To achieve this, I used a fairly standard set-up, with two white lights and a sheet of wine-red satin for the background. The fill light was placed frame right, in front of Chun-Li, with a rim light placed frame left, behind her. The rim light helped to pick out details while maintaining the shadows produced by the fill that would define her conotours more prominently. At first I also had a reflector set up, but I decided to remove it to preserve the depth and darkness of the shadows, which created a more dramatic contrast. Both lights were diffused (the fill light was more heavily diffused than the rim light), and were flagged to prevent too much of the light from spilling onto the background.

One thing that does bother me is that Chun-Li’s hair tends to blend into the background in some shots. Unfortunately, using a third light to outline the top of her head wasn’t feasible this time around due to equipment constraints. While I’m happy enough with the set, I think that little tweak, implemented properly, would have helped make Chun-Li pop out a bit more. Something to consider for next time!