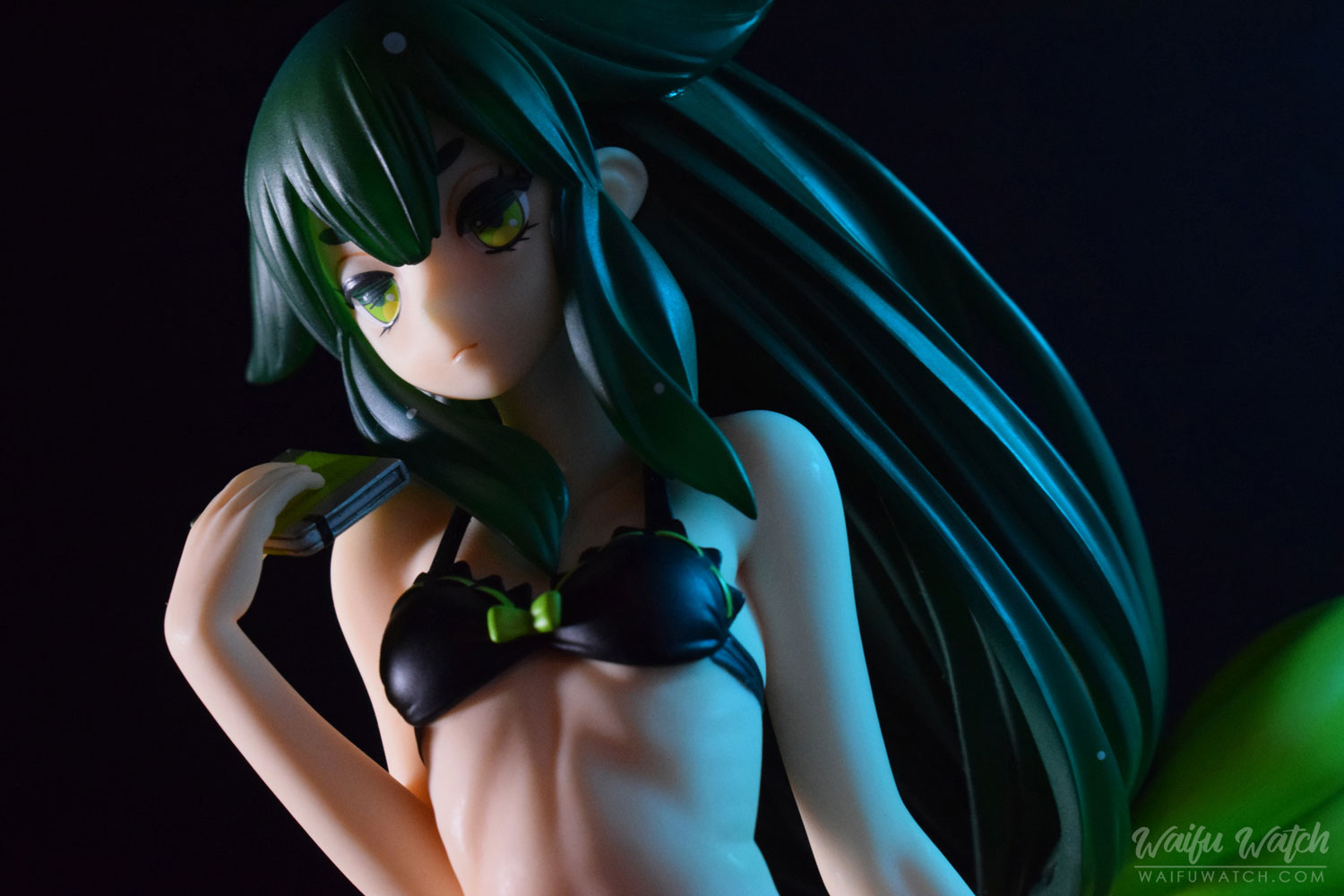 Today we’re taking a quick look at a figure I got some time last October – it’s Amakuni’s rendition of Miya Utsu-tsu, from Gatchaman Crowds. This figure was given to me as a gift after mentioning  to a friend that I didn’t have any green haired girls in my figure collection – a pleasant surprise indeed! However, I didn’t really recognise the character as a result. What little I know of Gatchaman in general is what was presented to me in Tatsunoko vs Capcom (which is a pretty fun fighting game, but not a great font of ). In other words, basically nothing.

Despite knowing so little about her, I still like this figure a lot. Utsu-tsu has an attractive and distinctive design, sporting a top notch ‘lingerie and high heels’ outfit (a personal favourite). Amakuni did a great job capturing her image, I feel – this is a high quality piece of work. I’m a particular fan of her hair, and I really like the detail in her eyes, as well. Since she’s not wearing much, the figure would live and die on its body sculpt, but I think that turned out well too. She does take up a lot of shelf space though, due to the curled tips of her hair and the wide stand that accomodates them – something to consider, if you fancy picking this one up for yourself.

As for the photoshoot, I took these pictures at the same time as my Halloween photoshoot for Perona. The setup was largely the same, using one or two white lamps for fill lighting and a coloured light for rim lighting, set against a plum card backdrop. Any white light was then flagged to keep the backdrop dark, while the coloured light was allowed to create a glow. The main difference in this set of photos was the use of a green light which, for some reason, turned out blue in the photos despite the other greens being preserved.

These pictures are a bit noisier than I’d like – apparently I was shooting with a much higher ISO than I tend to use now. Still, I really liked the moody atmosphere created by the dark background, the deep shadows, and the cool blue-green lighting. This rendition of Utsu-tsu does look a bit gloomy and mysterious, so I thought the tone suited her. Aside from setting the mood, the shadows did a great job accentuating her body sculpt, although in some shots her left eye does get a bit lost in the darkness. There’s only a handful of pictures this time (I took them on a whim, really), but I thought they were worth sharing anyway. Perhaps I’ll return to Utsu-tsu for a more in depth look at another time.