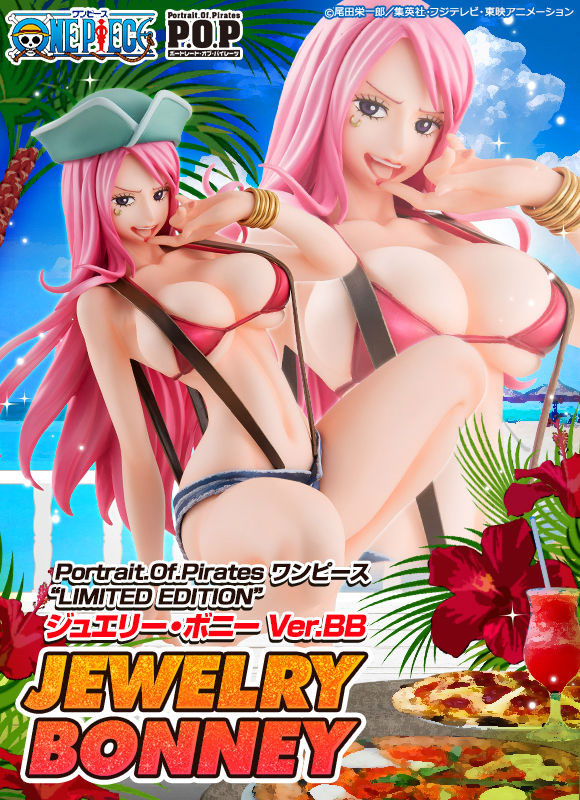 The latest in MegaHouse’s popular Portrait of Pirates Ver.BB line of figures is available to pre-order now. Known as the Big Eater, Jewelry Bonney is roughly 14cm tall and features a removable hat.

As with most Ver.BB figures, Bonney is a limited edition figure, and can only be pre-ordered from the following stores:

If you’re looking for a more Western friendly site, Bonney will probably become available on sites like Nippon Yasan and Solaris Japan shortly after pre-orders open, so keep an eye out for that.

I’m probably gonna come off like a massive pervert here, but hey – I really quite like this figure. Bonney is a really unusual design, and one of my favourite One Piece women. She’s known to be amazingly vulgar – her defining traits are that she eats like a pig and never closes her legs. I’m really glad that MegaHouse has represented that part of her character; if you asked Bonney to do some sort of saucy pose, it would probably end up looking like this. Or I guess she’d probably beat you up. Either/or, you know?

Otherwise, this looks about on par for MegaHouse’s Ver.BB line, which is no bad thing. I’ve previously reviewed Boa Hancock and Kalifa, and I liked both figures quite a bit. The quality on Ver.BB figures is roughly mid-level, but the price-point reflects that. This is one of those figures, really; if you like the Ver.BB series and you’re a fan of Bonney, then this is probably right up your alley. But it isn’t going to change your mind if you weren’t already a fan.

As I’ve mentioned a few times lately, my pre-order calendar is jam-packed and unfortunately Bonney is landing in February – right in that stacked first half of 2019. Still, I’ll be looking out for an opportunity to pick this one up. She’s just the right sort of trashy for my weird, pervy tastes. On the bright side, Ver.BB figures don’t tend to do badly in the aftermarket, and often get variants down the line too, so she might not be too hard to pick up in the future. We’ll see!